I’m the daughter of two Muslim Palestinian immigrants to the United States. I found myself in the diaspora, struggling in that liminal space between home and…home. I eventually moved to Palestine and ended up living permanently in Ramallah where I attempted to nourish the roots which had been uprooted and planted over the US. In the months after moving here, almost four years ago now, I launched a series of projects centered on discussions around sexual harassment and gendered oppression. These projects culminated in the founding of Nöl Collective (formerly BabyFist), an intersectional feminist and political fashion collective which features the work of several women’s cooperatives, designs and manufactures its own in-house brand, and offers a safe space for the community to hold discussions and workshops. When I’m not working I’m exploring the villages of Palestine or waiting for/making the most of mango season. 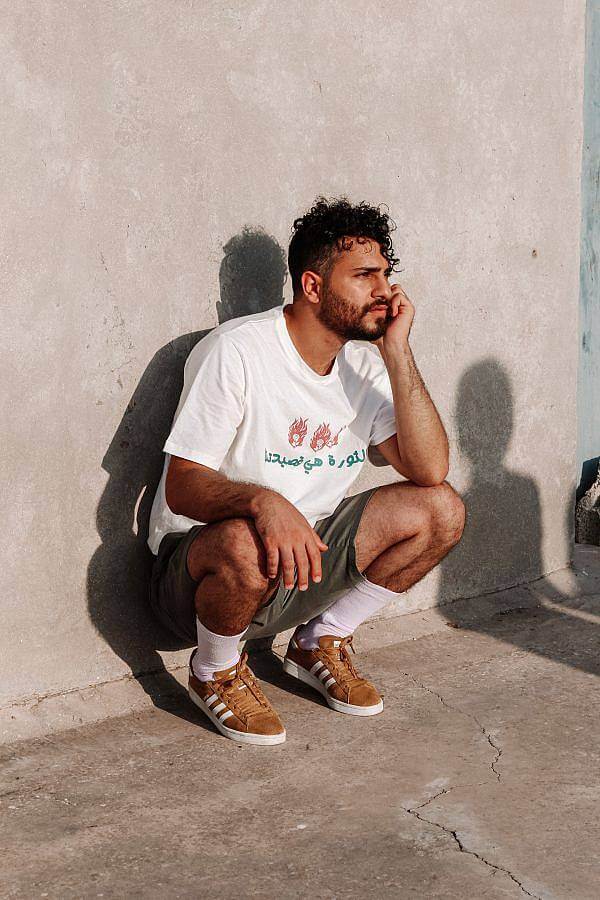 Nöl is the Arabic word for “loom” (نول). What was the impetus behind your recent name change to Nöl?

I was nineteen years old when I launched Nöl (formerly BabyFist), and didn’t necessarily have a vision of who I was yet and who I wanted to be. I was still doing a lot of the heavy work of decolonizing my mind, a consequence of having been raised in the southern USA. The name I chose had simply not kept up with the evolution of my being over the following four years.

Eventually, I reached a point in which the work I was doing in the collective needed to unfold in a different chapter under a different, and more fitting, name. It was almost like I could only grow so much while under BabyFist. I needed to honor all the work I had done previously, close that chapter, and open a new one to release myself fully into what was coming next. So it was that Nöl came to be. 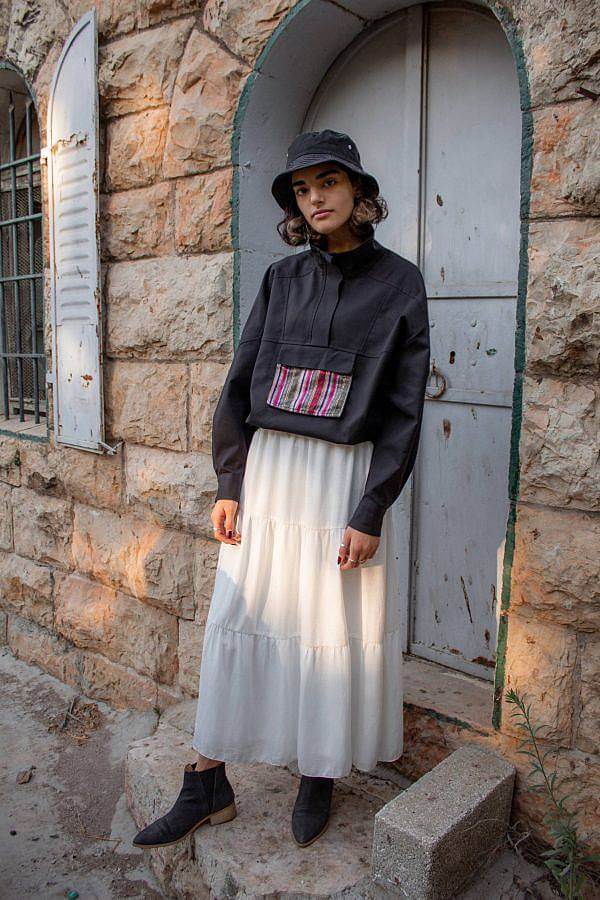 Your website shines a light on the fate of the loom in Palestine, can you talk a bit about that?

The fate of the loom in Palestine may seem like a sad and inevitable consequence of the “progress” the world is making regarding technology, consumption, and production. Yet, what’s significant about this story is that it is representative of the loss of indigenous reverence for the earth and sustainability and its replacement with the settler-colonial greed which has been raping the earth for decades.

This manual machine seemed to be a symbol of the collective human and creative effort Palestinians poured into creating clothing. From sheering the livestock to spinning the wool to dying the yarns with plants and spices native to our earth, to setting the colors of yarns by washing them in the seas of Gaza, to finally weaving the yarns into cloth on the loom. My passion for the Palestinian loom blossomed as I began to piece together puzzle pieces of my own people’s history and to illustrate the map we needed as a collective to attempt to return to this ancestral and indigenous knowledge in harmony with mother nature.

Can you discuss your line of hand-made slip dresses with Tatreez belts?

We have a lot to learn from the art of tatreez, a traditional Palestinian embroidery, beyond the meanings of the stitches and motifs. My fascination with this centuries-old tradition is that it is a defiant remnant of the relationship indigenous peoples had with the earth. They were creating clothing heavy with meaning, specifically for a person, designed to last years if not decades and even generations, and slow.

The slip dress and tatreez belts officially marked our transition away from ready-made fashion into slow, made-to-order fashion. Incorporating this tatreez dress was our first step in a similar direction. While the slip dress itself is machine-made quite quickly, the dress is hand made. It takes ten hours to embroider each one. This means that customers who purchased this slip dress and tatreez belt were purchasing a piece they would not see for weeks, a radical departure from the world of fast fashion we’ve grown so accustomed to. These dresses and belts asked their wearers to reconsider their standards of fashion, helping set us off in a new direction. 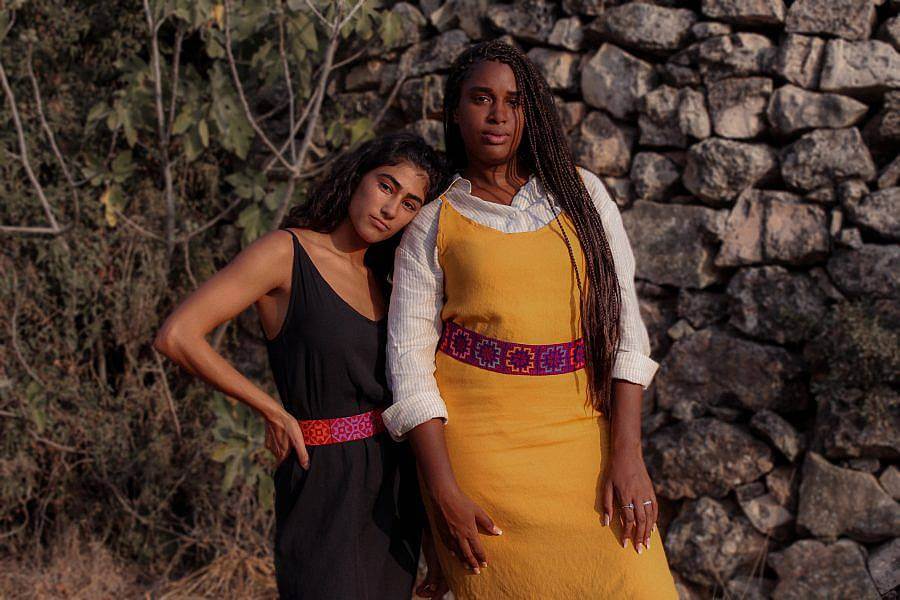 How does working in Ramallah and Gaza influence and impact your fashion collective?

The colonizer, Israel, has effectively divided up Palestinians, separating us from one another and severely limiting the human right to movement. Before the over-a-decade long siege on Gaza, Gaza had a flourishing textile industry that featured nearly 1,000 factories and employed over 35,000 people, most of whom were women. After the siege, over 90% of the factories closed, and most lost their jobs. In the last three years or so, a small number of factories have reopened and we decided to manufacture our apparel there out of solidarity, as the difficulty of moving apparel out is difficult and makes less sense from a business perspective.

In regards to working with women’s cooperatives in Ramallah, Beit Duqqu, Nisf Jbeil, Bethlehem, and Jerusalem, our frustrations lie in the difficulty of obtaining materials to create everything. The occupier limits what kind of fabrics can come in and even which colors certain fabrics are allowed in (green fabrics are limited in Gaza as the occupier fears we would use them to make army uniforms). We also face difficulty in shipping to the outside world, dealing with incredibly expensive shipping that is marked up twice as it leaves both Palestine and Israel. Furthermore, we even deal with what I call fin-tech apartheid, limiting most Palestinians ability to sell easily to international customers and accept their money.

How does your vintage collection fit into your vision for your organization?

Our decision to launch the Vintage collections was the first step we took in the direction of more sustainable fashion. We reached a point where we were deeply troubled by the idea of manufacturing new clothes and wanted to begin making changes to reflect that. At the end of nearly every month, we release a small collection of carefully curated vintage pieces. The beauty of this process is that we provide a second life to these pieces as well as offering something truly unique. 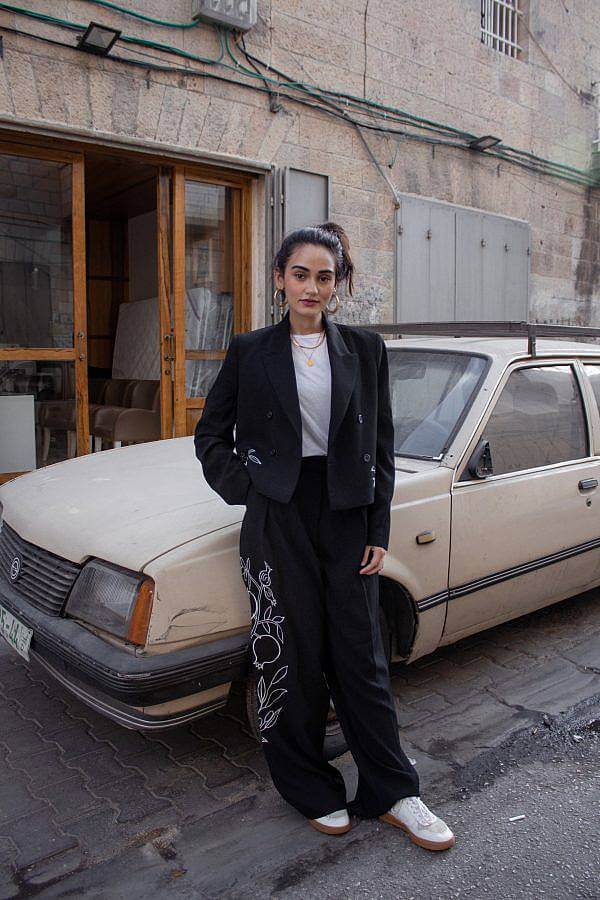 How do you feel fashion contributes to radical conversations?

In many ways, fashion is a catalyst for radical conversations, particularly because fashion is often politicized (think of the debates and wars waged around the veil, for example). It is precisely because fashion is so strongly connected with women that it is both highly politicized and deemed frivolous. What a woman wears, how she wears it, and in what context, has sparked endless conversations as time and time again society has taken it upon itself to decide what women can and cannot wear. Furthermore, over 3⁄4 of garment workers in the world are women, most of whom are women of color, making the very production of fashion itself a political conversation around gender justice and worker’s rights. Throughout history, women have been the vessels for traditions and knowledge surrounding fashion (dying, weaving, embroidering etc.), pushing them very closely into harmony with the earth around them. Indigenous women all around the world created slow, sustainable fashion far before it became a trend, and before it became the only option for a globe teetering on the brink of disaster. In conclusion, every aspect of fashion from its history to its production, to the consumption associated with it, to the colonialist and orientalist discourse, is political and therefore can be the catalyst for radical conversation around change.

What intimacies between the body and clothing do you feel are often overlooked?

It’s crazy to me that although clothing literally envelopes our skin and is the conduit for artistic, personal, and cultural expression, too few of us stop to think about who made them. Why aren’t we asking whose hands dyed and wove together the threads forming the cocoons around our bodies? Those same hands that prepare dinner for loved ones, which pick fruits and pour juice and brush hair. The people behind our clothes live and work in complex social and political frameworks which we often know nothing or very little about, yet we wrap the clothes they make around our bodies.

If we hope to make any significant and meaningful change around the ways we produce and consume fashion then asking these questions and forging connections to the people behind our clothes is a critical step. 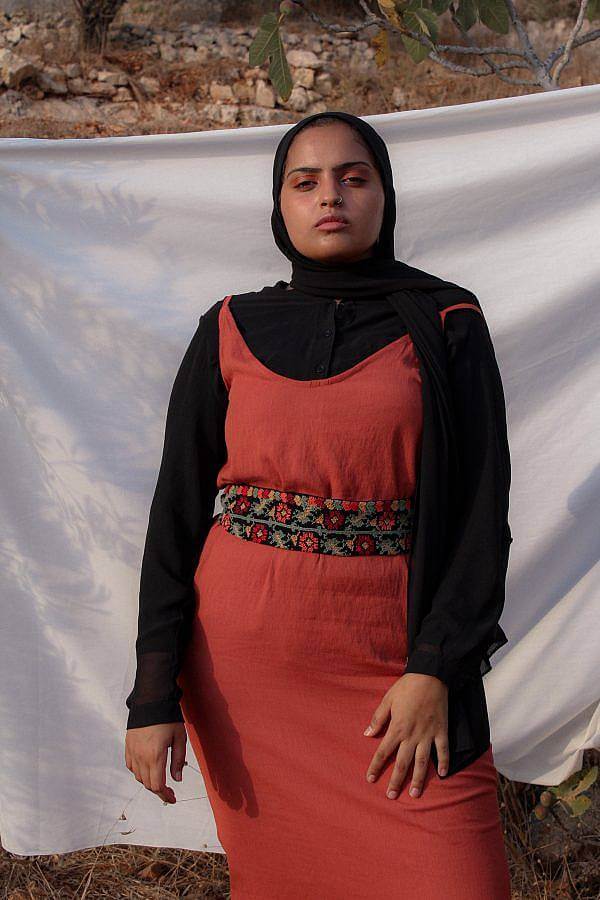 A big part of what we do is read and discuss books. We’ve found that every time we share a book recommendation that the most common struggle for readers in Palestine is actually getting their hands on a book. Our access to bookshops is quite limited and many people can’t easily buy e-books as the use of credit and debit cards is not widespread in Palestine. As a collective, we decided to launch a bi-lingual community library featuring all of the titles we recommend as well as many more. Anyone is welcome to read the books for free and is welcome to contribute to the library as well so that others can benefit. We’ll be launching the library by December 1st of this year.