My name is Eduardo F. Rosario. I’m from Caguas, Puerto Rico, currently living in Chicago, IL. I work with sound.

This past month I worked on a series of performances titled On Circulation, On Lossy Codecs and On Recombination at the Experimental Sound Studio, the Chicago Design Museum and at Sector 2337 respectively. All three were different arrangements of the same materials. Up next is properly recording some of these arrangements and self-releasing them probably on a small tape edition. Other than that, I’m interested in producing some sort of experimental radio play based on a series of field trips around Chicago exploring different issues, from technofossils to mobile architecture, and how these relate to, for example, financial markets. But I’m still doing the initial research, which means it might take a while for it to materialize or not even happen at all.

Can you describe your production process and how that might relate to themes in your performance on lossy codecs?

This is a very difficult question because I’m not entirely sure myself. Although my main practice is sound based I haven’t always done sound; and even when I did, I’ve always tried things that I didn’t completely understood and wasn’t sure whether they were going to work out or not. Knowing what to do and having a sense of control over things bores me a little. Therefore, every project turns into an exercise in self-sabotage, where I set myself all sorts of challenges just to see what happens and keep it exciting. Of course this means that when the deadline is due in a week or so, anxiety gets the best of me and I have to make a lot of irrational choices just to get the work done. Then people ask me about it and I’m like, “I know what’s in there. I still haven’t processed what’s just happened.” Sometimes I fail miserably—and tell myself I’m never pulling one of these again—and at other times there are incredibly rewarding surprises. If I want to accomplish something specific I have to hide it from myself. Regardless of the outcome, it’s always a learning experience. On lossy codecs is not a completed work but merely an instance, in a constantly changing research practice, on how digital sound objects move across contemporary media. It started with an interest in how sampling could be used to illustrate the military background of much sound technology by layering multiple historical sonic images. Structurally, much like Warburg’s mnemosyne atlas, but informed by Kittler’s remark that “discos are preparing our youths for a retaliatory strike.” As such, with every performance I thought, “oh I wish these samples were shorter, like very quick incisions,” so I kept trimming them as well as expanding the library—which includes a huge assortment of disparate things from Han Bennink to candy-wrapping machines and servo motors to random movie scenes and user-generated content to Esplendor Geométrico—all triggered as fast and as clustered as possible. The source of the samples is no longer identifiable but the spectral qualities of the sound remain to some degree. The choice to use rhythm felt like an appropriate way to provide the different materials with some consistency and at the same time it echoed the relationship between rhythm and the military, which, on the other hand, as Deleuze and Guattari wrote a while ago, “there is nothing less rhythmic than a military march.”

How did your interest in sound begin?

Once, a while back, when I was a student at the conservatory I went into the library and checked out two items: a 2×LP by Karlheinz Stockhausen that contained Spiral, Wach, Japan and Pole; and a 6×CD collection of Anton Webern’s oeuvre. Those two things completely blew my mind so I decided I wanted to study composition and do similar work. I’ve never been a particularly talented instrumentalist, but exploring the sonic qualities of physical objects, musical or otherwise, came natural to me. I had an electric guitar and had recently learned about Keith Rowe, so I started imitating his technique and learning basic electronics to expand the instrument’s sonic possibilities. Because of that, I began to collaborate with choreographers—specially Nibia Pastrana—who were completely open to anything I wanted to explore. From that point onwards I’ve been working with sound.

In all sorts of ways; although, not because I wanted to but because I had no choice. Before I moved here I was doing mostly sculpture. Once I get here I don’t have a studio to produce and store things at anymore, or a car to move the pieces and acquire materials, plus I didn’t knew anybody. The only logical option was to start doing sound pieces and performing again which is something I had neglected for a couple years. Chicago has an extremely rich sound culture and inevitably things tend to overlap, clash, mutate, etc., and I find this fascinating. One of the first shows I went to see was Elysia Crampton and Actress, which to this day still makes me question what is this thing that I do. That’s an experience I continually have here in Chicago. I’ve also met so many wonderful people whose work ethics and interests have significantly informed my practice. 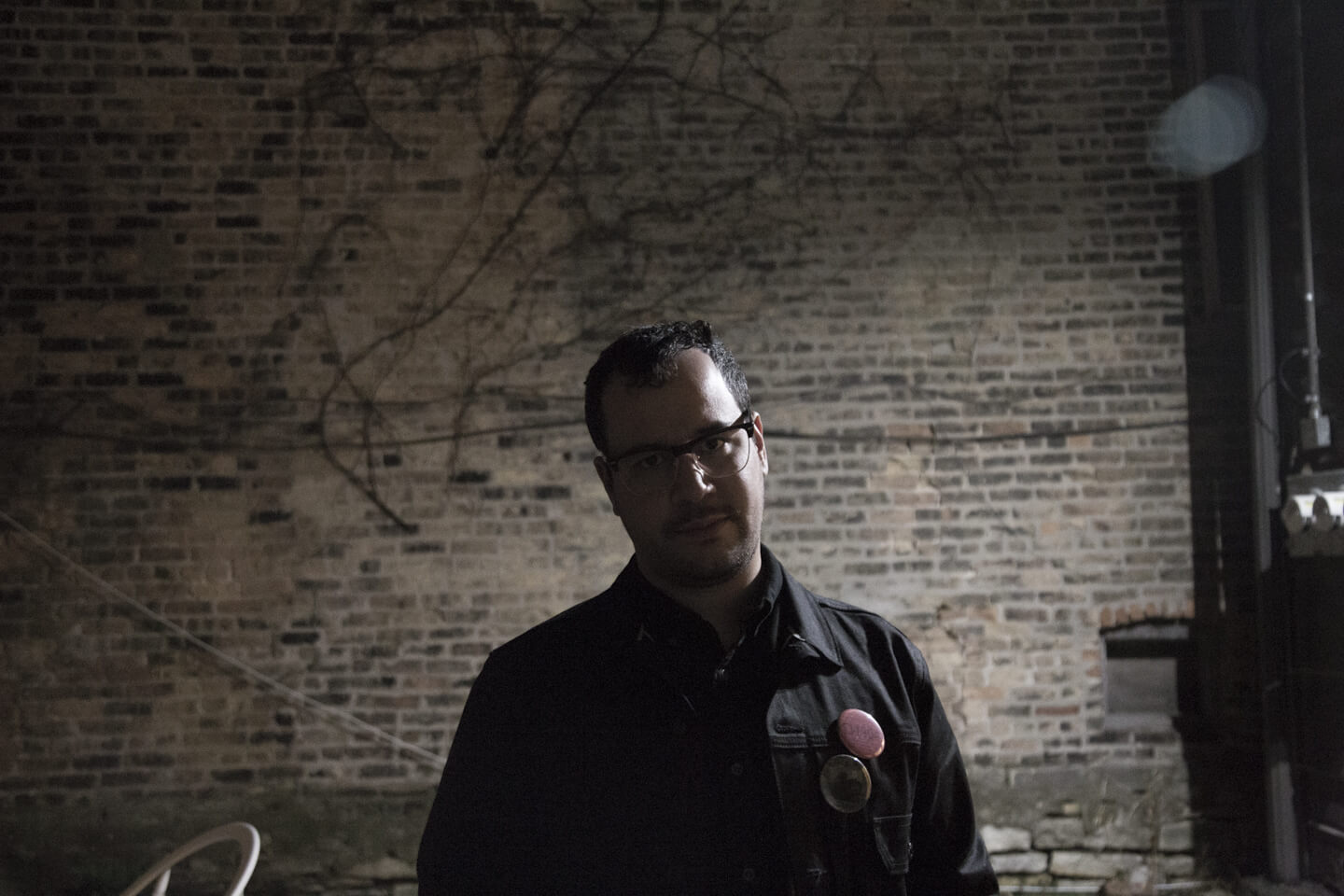 What are some things that are influencing your work right now?

Oh many things. I’m the kind of person who really enjoys more experiencing other people’s works rather than making my own. And when I make my own it tends to be some sort of cryptic tribute to something else. It might not make sense right now, but the films of Jean-Marie Straub and Danièle Huillet are very important to me, specially Der Tod des Empedokles, which was in collaboration with Dietrich E. Sattler. Other than this, I’ve been revisiting Nicolas Bourriaud’s little book Postproduction, as well as Kodwo Eshun’s More Brilliant than the Sun and François J. Bonnet’s The Order of Sounds. And last but not least, my friend Connor Camburn here in Chicago, who through his different projects such as Litüus, as well as his label Chained Library, has been a great source of inspiration. There is much more but that’s beyond the scope of this interview.

Can you explain your thoughts on how the visual aspects of your work inform the sound aspects?

I generally use the same building criteria regardless of medium. I start by outlining the boundaries of the project. This means identifying the different things I want to work with and deciding how elastic the web containing these will be. Then collecting as many resources in as little time as possible and establishing what the different consistencies between them will be. What follows is developing the topography of the project, questions of scale, saturation, contradiction, etc. And the rest is a continuous process of improvisation and documentation, where I try to understand what this new ecology I’ve put together does and how it changes over time.  This sometimes can be difficult for people to understand because it seems like an arbitrary mess. But the only way I can produce something is by opening up space and bringing things together even if it disregards all conventional logic. Other than how they are perceived, sonic and visual images are not that different in my opinion. So when I do visual work I always consider, for example, at what rate will these images be experienced, how are images read over time, and on the other hand, when I do sound I ask myself whether a particular performance will convey the conceptual images I’m concerned with. Walter Benjamin wrote about Hölderlin in The Task of the Translator that a literal rendering of the syntax in his Sophocles translations extended the boundaries of the German language. When I’m producing, I’m interested precisely in what dwells at the margins and how to expand those zones.

What do you do when you’re not working on your art?

Usually reading, listening to music, eating greasy food or binge watching random tv shows. Nothing special in the habits I guess, although the selections might not be as conventional. But it all becomes work to some extent. Once I was listening to Jakob Ullmann’s Disappearing Musics. A little before that I was watching some sitcom on my laptop but as I’m always drifting aimlessly in my free time, I forgot about it. All of a sudden, to my surprise, some wild laugh track comes out while the music is playing and I thought “my god this guy is sick!!” It took me a moment to realize what had just happened, but the idea ended up in my future projects repository.

Your upcoming project On Recombination consists of three separate parts. Is there a relationship to time in your work, and if so can you describe this relationship?

Yes. Time is one of the things I’m most interested when producing something. For this particular project I considered how compression standards endow digital sound objects with different circulation speeds in relation to what gets cut off and how data gets simplified. I claim no expertise on the subject. As such, how successful this particular iteration of the project was in relation to what I set myself up to do, is questionable. Conceptually I think it is an interesting playground that allows me to try out different modes of organizing and presenting material as I do research. I like to think of time as something that’s plastic and can easily be manipulated. To me a physical reference is magnetic tape. Back in Puerto Rico, because it’s hot and humid, magnetic tape tends to get moldy. It turns into a substrate for fungi. That led me to consider, as information is recorded linearly on tape, that teleological conceptions of history are much like the mold growing on my tapes. And since you can do all sorts of physical manipulations to tape, it made sense to anachronistically arrange different historical narratives, as simultaneous temporal domains. On Recombination is definitely not the best example of this—as it turned out to be way more visceral than what I had initially intended—although time was constantly dislocated on a mechanical sense. Kind of like a click track on a scratched CD. In the future I really want to go deeper and develop further this temporal plurality.

Honestly, I’m not even sure. Some of the worst reactions have at the same time been some of the best. Once a person tried to make a case to legally prosecute me because, according to him, the decibel levels were past the legal limit and his hearing was hurt as well as that of his colleagues. At another time a person wrote in a review that a performance I did was so intense I had cured his fear of flying. Conservative composers back home would frequently dismiss my work by saying “that was already done in the 60’s” (whatever that means). A few years ago some unattended child is standing right in front of one of the speakers as I perform and suddenly the father shows up, covers the kid’s ears and runs away very dramatically as if both their lives were in imminent danger. Last June I opened for Kali Malone, and halfway through the set this young woman with a white sox cap just walks towards me and starts messing with my setup. I tell her to step away, but she insists. I tell her two more times to please move and to not touch anything and she yells at me “I’m a DJ toooo!!” Those are just a few; and I don’t even perform that often. Can’t even imagine what other people who perform regularly must go through.