Tell us a little bit about yourself and what you do.  I am a conceptual artist & mixologist by trade. I time travel but that gets complicated.

What is influencing your work right now?  The funny thing is that a major influencer in my work are writers, Gilles Deleuze, Clarice Lispector, Umberto Eco, and José Esteban Muñoz. In these texts, I find a conjuring, a calling for a language that is not here yet, a way of co-existing with each other and one another, to recognize oneself in the other to give them space, to let them endure, to reach a blindness that is equal. I guess in some way I always wished to be a writer of philosophy, theory or romance novels, but I do not possess the structural and grammatical skills to be eloquent in those fields, so I resort to the fields of poetry, painting, and performance, a different form of language crafting that eludes text (where I sometimes get stuck in its hermeneutic circles). So yeah, text and the concepts behind it, language making as a process. 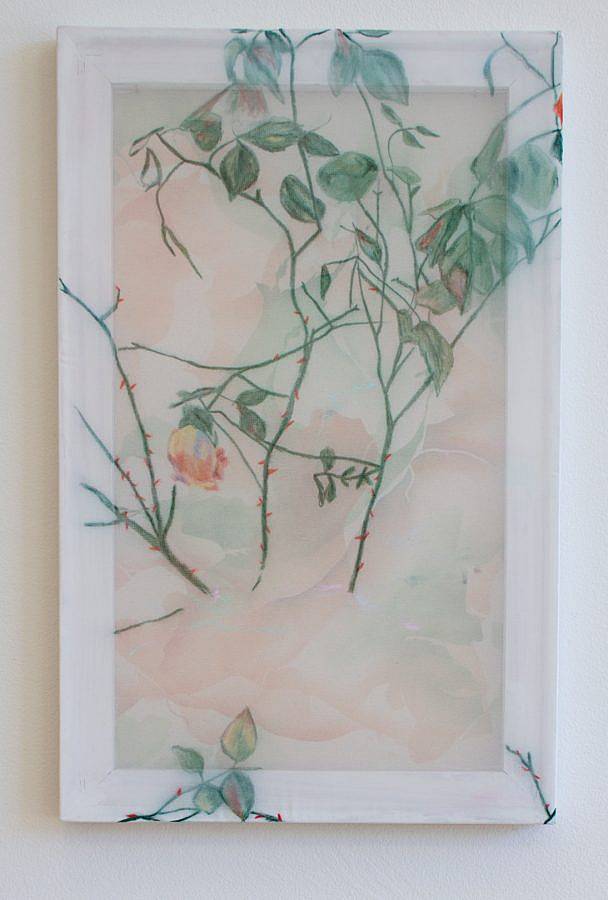 What are you reading right now?  At this moment, I am reading Cosmicomics by Italo Calvino. I like fragmentary structures in books, and that one is pleasant to pick up before falling asleep. I just finished Invisible Cities by the same author. But I am always reading several books at once. I have been reading A Thousand Plateaus by Deleuze & Guattari for seven years and haven’t finished it yet! Also re-reading Clarice Lispector’s The Passion According to G.H. and lastly José Esteban Muñoz, Disidentifications. It’s great to alternate between these books and find conceptual bridges between them.

What are some recent, upcoming or current projects you are working on?  I just had a solo show at Efrain Lopez Gallery, and I have two more solo shows coming up. One in September at Heaven Gallery and another at Bar4000, date TBA. A group show in Vienna is also in the works.

Who are some of your favorite artists?  Kalup Linzy, Donna Huanca, Giorgio Griffa, Michael Milano, Holly Coulis, Joshua Abelow, Matt Morris, Sofia Leiby, and 43.
What is your process like? My process starts with thinking, and then it gets to thinking about the very act of thinking, questioning the question, the process, and its own assemblages and multiplicities, it’s non-hierarchical and dynamically fluid. I feel like I have been continually working on my process for the last 4~5 years, and the paintings or performances that come out of it are incidental. To explain my process I would have to write a book about mundane things in life, and about the dreams I have, and about the silly things the small voices in my head come up with. About the different sets of language we craft with significant others, acquaintances, and strangers.

But if you want to lay it down in technical terms, more than half of the recently produced paintings go like this: I receive a photo from a friend with text like (this are cosmos and made me think of you…) I then use this image as a reference to make a soft pastel drawing on paper or fabric. This drawing is always in progress getting reworked after each transfer and is never finalized. As I make this drawing I transfer it to other surfaces with a technique that is similar to monoprints, creating a mirror ghost image. I can transfer the same image multiple times usually two to ten or ∞. I trace gestural outlines from the figures in the photographs and shift them around the surface, these tracings and the barely there traces of the transfers continue to mutate and deconstruct throughout the composition of different paintings, becoming glyphs, crafting a language of their own to eventually develop compositions that are only derived of traces of traces.

In summary, deconstructing an image the way a tarot reader reads the cards for the receiver. The cards might be the same but within them, there are endless multiplicities. With every spread (composition) a new different reading. the cards are access points to a space that precedes language for developing common grounds to craft a new language of sensations and nowness.

What’s your absolute favorite place in the city/the world to be?  DANNY’S, Thursdays around midnight, dancing by the A/C, drinking a glass of rose.

What are some of the best reactions you have gotten as a result of your work?  In 2017 I brought my sister Laura and her family to see my solo show, Early Roses Filled with Late Snow at ADDS DONNA. Carolina my youngest niece who was only two and a half years old then, after looking at all the paintings she felt really moved and inspired. She sat in the middle of the gallery, took out a notebook from her backpack and started drawing flowers. That for me is worth more than an Artforum review.

How do you see your latest exhibition at Efrain Lopez gallery as a development of your previous exhibition?  In some way, it expands back and forward in time. It was great to be able to include two pieces from 2016, when I started working out the kinks of my process based practice and it’s conceptual under workings. It’s a drawing from the cover of Derrida’s book The Post Card. It depicts Plato writing through Socrates. In the making of that piece, I made multiples from a single drawing by tracing the drawing through sheets of paper that had soft pastel on the back inscribing further onto the next pieces from one inscription three developed. Complicating and multiplying their temporalities and hierarchical orders. That was the beginning of my exploration of multiplicities through transfers. Also, via press release, I introduce a conceptual personae that has been the driving force behind the conceptual inner working of my works. It had been something very discreet in previous shows and it is still discrete in the install of the current show (they can be shy), but they get mentioned in the PR and I wrote a fantastic poem for everyone.

What was the last exhibition you saw that stuck out to you?  Kalup Linzy’s performance at Tiger Strikes Asteroid, Chicago and Unthought Environments at The Renaissance Society.

What is your snack/beverage of choice when working in your studio?  Last summer was really hot in the studio (no A/C) so I keep my cool drinking NiCola LaCroix with Besk (fancy malort). I try to take some simple food to the studio but when the day gets long and I need the last push to finish a piece I’ll snack on an RX bar and that helps me get there! All these folks should sponsor me! 😉

What do you do when you’re not working on your art?  Dancing at Danny’s by the AC, but then in some way that counts as a rehearsal for future performances, and if I’m not dancing I’m writing this sitting at the bar now. And if I’m at work making cocktails I can’t help to think about the colonial histories embedded in some of the spirits I use and the stories behind some cocktails, and how I might intervene to make new bridges give fair representation to the different spirits I use and their histories (i.e. Think twice about naming a drink that uses Mezcal as a base, Oaxaca something, or make spicy and smoky). While I’m not directly producing objects I feel like every gesture in my everyday life is a prelude to the gestures that might manifest in future paintings and performances. My art practice is process-based and the process is in some way derived or informed by the way I live or strive to live. it’s a very intimate practice that hides under veils of aesthetics and hermeneutic circles.