Tell us a bit about yourself and what you do

I’m an experimental music performer and sound artist based in San Francisco that makes my own instruments and electronics.  My sound practice is centered around the materiality of sound, how it can be malleable as a physical medium.  The way sound relates to the human body and the site in which it takes place.  I often use unconventional objects as instruments like band saw blades, bullwhips, snare wires, etc. Sonically, I’m more concerned with texture and dynamics rather than conventions in harmony or song structure.  My improvisational live performances have been described as spirited and confrontational.


You are currently doing a lot of sound work with record player needles implanted into your nails. How did that process come about and what were the biggest challenges as you were developing it?

To be honest, I didn’t grow up with records.  Music on cassette tape was the earliest physical musical medium I had been exposed to.  In early 2020, I had been working on a glove with tape heads on the fingertips along with a motorized cylinder that had audio tape wrapped around its circumference.  You could play the tape by grazing the fingertips across the spinning surface of the cylinder.  But when I had released my first record ‘Hair Birth’ later in the summer of that year, it kicked off long and spidering lines of inquiry into the possibilities of vinyl.  The vinyl frontier, if you will. The first line of questioning into the conventions of record enjoyment had to do with the album art of my debut LP, which featured a cover image rendered in copper, transforming the entire jacket into a speaker through which the record could be played. The second was not a far leap from the tape glove, would it be possible to embed turntable styli into acrylic nails and wire them to transducers so the sound could be amplified?  The biggest challenge to answering that question was finding space to experiment, since I had just moved back to San Francisco in the middle of the pandemic and was couch surfing for several months. It wasn’t until mid 2021 that I was able to secure a studio space and develop a prototype for the Needle Nails.  After moving into the space, I was able to pursue other lines of questioning. Could I make my own records using molding and casting methods, yes.  Could I build my own portable turntables with adjustable speed and direction, yes. Could I use cello bows as tone arms?  Bullwhips? Yes. Yes. There was some short-circuiting between new and old projects, could I embed copper coils into my handmade records, turning them into records that could play themselves? You betcha. The biggest obstacle for making work was finding space, and now as the pandemic winds down, the big constraint is time.

How did you get introduced to music and what was the moment when you realized that it would be a large part of your life?

My earliest musical memory was at the laundromat with my mom, sharing earbuds and listening to Peking Opera from a cassette walkman.  My young mom loved music and was always blasting 80’s New Wave or singing Chinese pop songs with the Laserdisc karaoke system.  Since a young age, I had been preoccupied with music, spending my allowance on CDs and fall asleep listening to them on my Discman. When I got access to a computer later on, I spent a significant amount of time as a teenager on Soulseek and music torrenting sites, downloading, listening, burning, ripping. I started discovering and leaning into weirder and weirder music, it wasn’t till much later, after college, that I started dabbling in making weird music of my own.

You’ve mentioned the idea of ‘chaotic sound’ before in writing – what does that phrase mean to you and your practice?

The idea of chaotic sound functions on a few different levels in my practice.  The circuits of the synthesizers I use are based on mathematically chaotic principles. A chaotic system is one in which very small changes in initial parameters result in dramatically complex, aperiodic, and unpredictable results.  Such is true of these instruments; as Rob Hordijk, the creator of the Benjolin synth puts it, the Benjolin is “‘bent by design’. as such, the module functions according to principles of chaos theory, where short to long sputtering patterns spontaneously transform themselves, at times, gradually, at others, quite suddenly, morphing into new pattern doublings and bifurcations.” Therefore the instruments I use have a layer of chaos fundamentally baked into them, using them in concert introduces another juncture for chaos.  And on top of that, the improvisational and physical aspects of my performance introduces further uncertainty, indeterminacy, and chance into the mix. 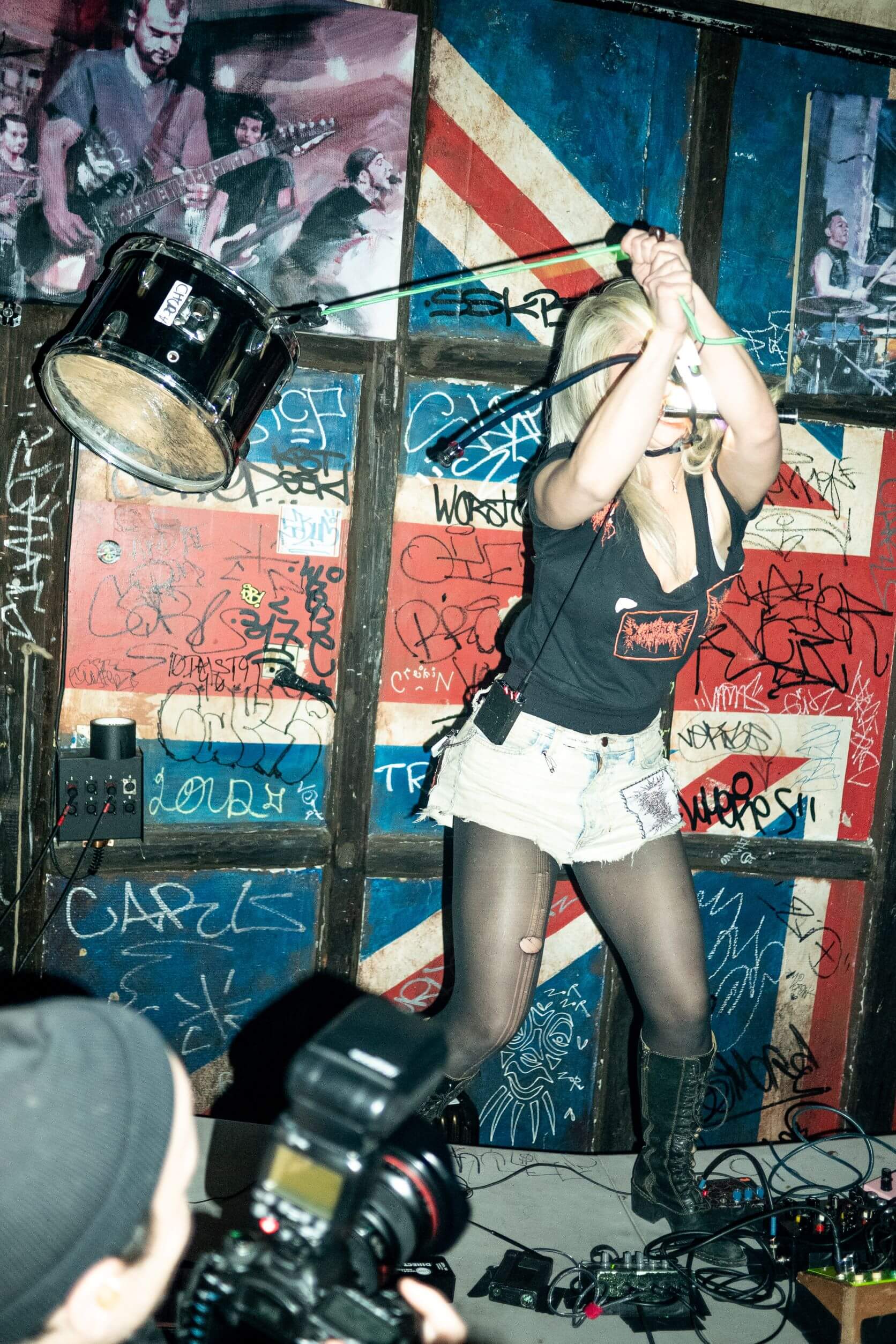 What have you been listening to recently?

You’ve also created other custom sound devices/instruments, such as an electromagnetic levitating speaker and ‘noise combs’ – what draws you to making your own devices and how did that start?

The compelling nature of the materials/concepts themselves drive me to experiment with their limits.  I think I’ve been influenced by the Modernist principle of Medium Specificity, to push mediums to their ultimate logical conclusions. What are the components of a speaker, how can I tweak their parameters to present a speaker that meets only the barest criteria for a speaker? How thin and how flexed can copper get while still functioning as a trace in a circuit? However unlike Modernists, I am not interested in total abstraction, that approach is alienating and flaccid in my opinion. I like to collide abstraction with objects loaded with personal and cultural meaning to bring the work into an absurd space. In the instance of the Noise Combs, a recognizable quotidian object is used to generate abstract textured noise so an audience is simultaneously drawn in by the image of someone combing and piqued/repulsed by the amplified sounds of tangled hair being undone.
Working for Flower Electronics, a small modular synthesizer company based in Massachusetts, while I was in college kickstarted my interest and ability to make devices for myself.  I first learned how to “stuff” printed circuit boards, PCB layout design, the fundamentals of electronics, and basic machining during my years at Flower Electronics.  Later I took a digital fabrication class called How to Make Almost Anything at MIT which taught me a number of skills like 3D printing, laser cutting, CNC milling, CNC embroidery, embedded programming, networking devices, etc. that became very useful for developing personal projects. 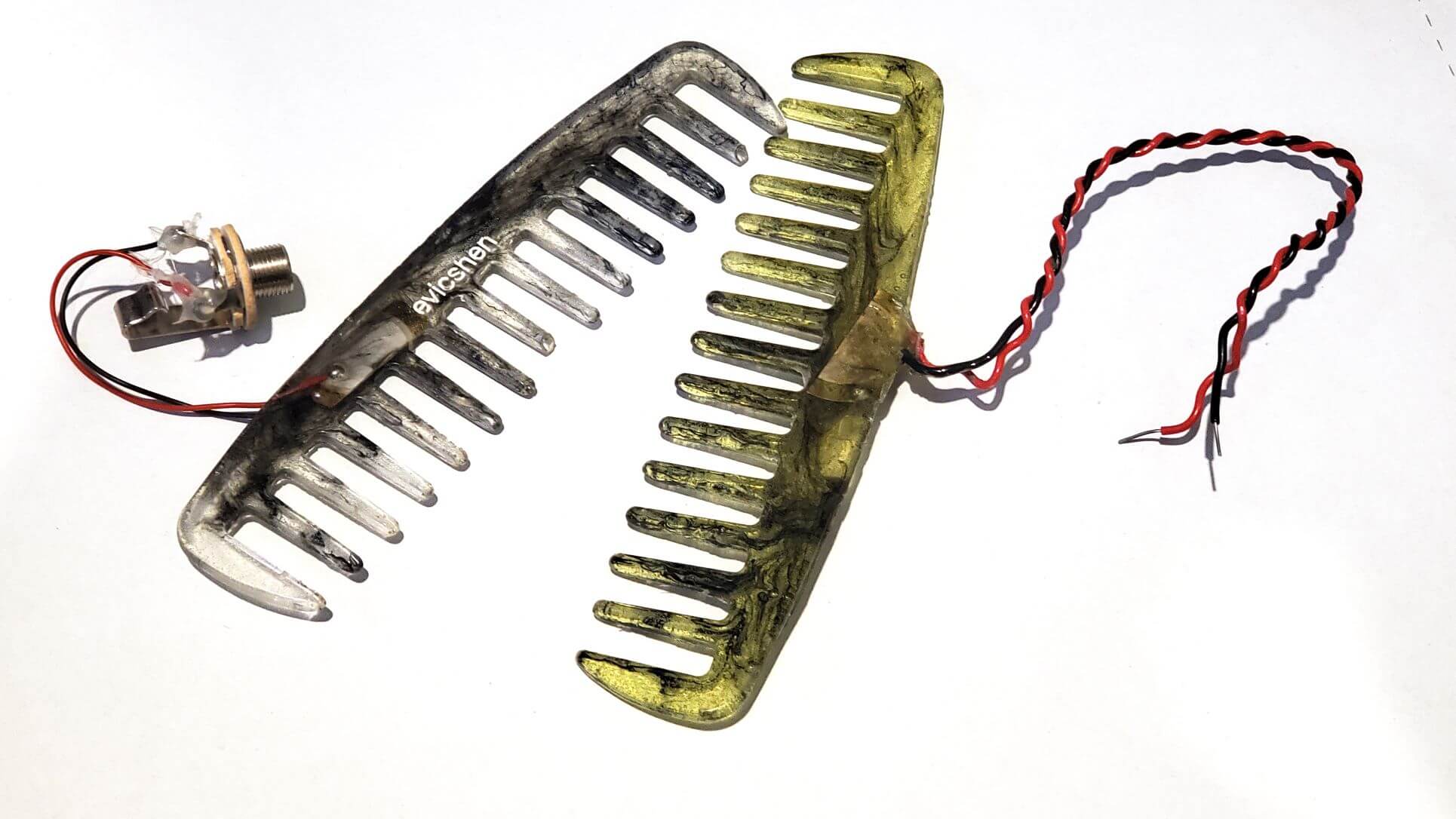 How much of your practice is performance versus sound, or do you feel they mesh?

They’re very difficult for me to tease one apart from the other, it’s like a form follows function follows form mobius strip, my performance should be generating or be an immediate reaction to the sound and the sound generates the performance. Even my visual work is hard to divorce from my sound practice, my installations present vestiges and vocabulary from my live performances. I would like to be able to play my visual work at any given moment.

Speaking of collaboration, you just were in upstate NY with Aaron Dilloway at a residency at Wave Farm radio, where you built something called the ‘inhaled yowls machine’ – how was that and what is that machine?

Oh man, it was so good. Wave Farm is incredibly beautiful and has so much inspiring art on its property, it was almost overwhelming. It was also fantastic working with Dilloway!  We recorded everyday and performed several times during the residency and I enjoyed every minute. His sensibility for sounds and editing is so top notch. Dilloway and I built the Inhaled Yowls, an anagram of Shen and Dilloway, machine before coming to Wave Farm.  It’s a tape loop instrument that is a cross between a Mellotron, a spring driven keyboard instrument that plays discrete tape samples, and a Phonogene, a motor-driven tape loop machine developed by Pierre Schaeffer.  The instrument controls speed and volume of up to 10 tape loops at once with access to up to 40 tracks in total.  The process of building/hacking the machine was challenging and I wasn’t even certain it would work or sound good, but thankfully it panned out in the end. 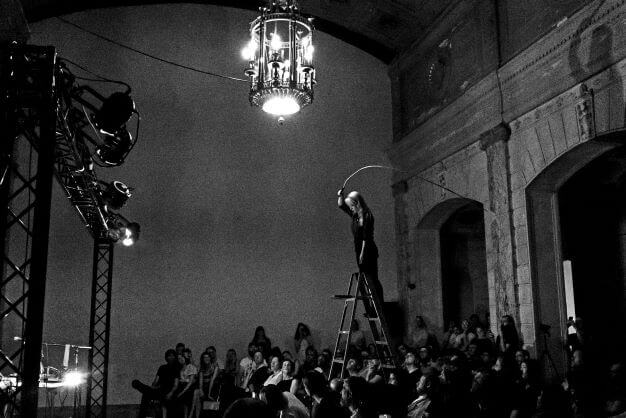 Do you have any upcoming projects or shows that you’re excited about?

Yes! Very excited to be opening for Bonnie Prince Billy in September and for a series of shows with Clipping in November. I also have an art opening at Indexical Santa Cruz in October.