I was born in Hamburg, Germany, and grew up in the interior region of BC. BC is beautiful, especially where I grew up, but also… complicated, backwoods and it felt stationary. I moved to Montreal in 2011 for no real reason except to be a musician, but one thing led to another and I ended up as an artist instead. I stumbled into a BFA in ceramics and eventually came to understand my work as one of expanded drawing, be it cropping, installation, marks in clay or sleep-staining bed sheets. For the last two years I’ve been focusing on developing a 2D practice, which is all colored pencil. Now it’s onto new things.

Montreal is an amazing place. I think a lot of cold places have strong creative scenes, and this place is no exception. Its affordable, vibrant and so many great people pass through, but as a University city those same people often leave. So it’s complicated, but I guess maybe similar to Chicago. As a young artist it’s pretty amazing with its affordability and the successful artists who hunker down here, so there’s lots of space to learn and people to look up to. I think its always prided itself on a certain euro-ness, too, which makes it feel like an Atlantic bridge of some sort. 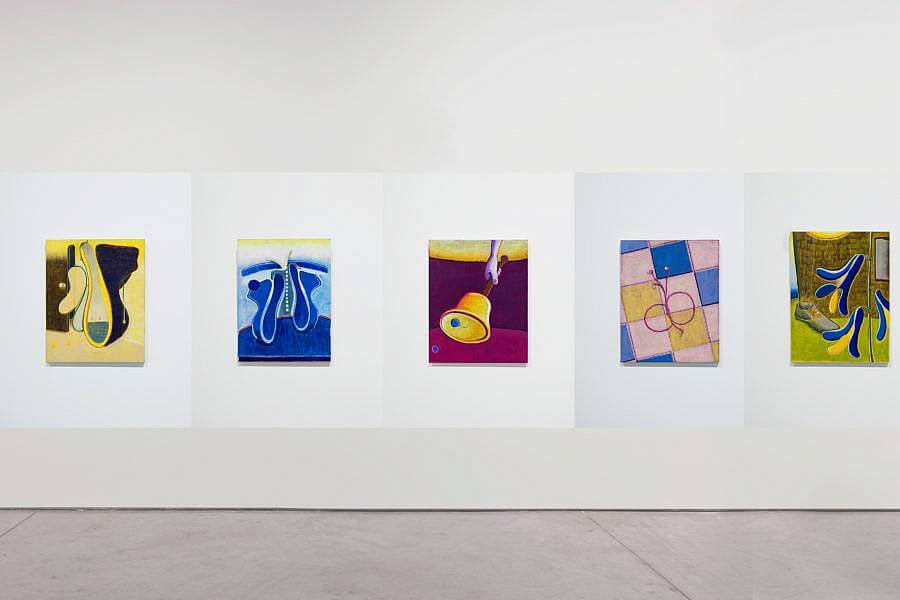 I got a research grant to explore a traditional waterproofing technique known as Oilskin, towards using it as a narrative material, and the rabbit hole of things related to it. Essentially its canvas, primarily ship sails back in its 1800s heyday, covered in a thick mix of wax, linseed oil and spirits. I’m thinking about how this material could maybe be the first practical or functional application of the process of painting, wherein painting is the act of waterproofing against a wet world.

Eventually, Oilskin hybridized into linoleum, being comprised of linseed oil, wax, natural resins, wood pulp and burlap. This seemed too good to be true, as now the constellation of ideas sits somewhere between linoleum as a flooring and printmaking material, the materiality and ingredients of oil painting, the gesture of waterproofing and the different sorts of image making that will result. I’ve long been thinking about water, and I feel like the impulse to use waterproofing, or the whole notion of hydrophobia, is a way of thinking and working through rising water levels and what that means through a material and embodied way.

I’m enamoured with it but for now I’m just trying to get to the bottom of it and figure it out.

If you’re curious, my show Thirsty Things at Clint Roenisch is largely thinking about hydrophobia, and the centerpiece, a hybrid video sculpture titled Wishing Well, is the most direct example. Its an animation of a well, where periodically-dropped coins send a colony of rabid bats awry,  who as the guards and inhabitants of the only well around, have claimed and poisoned it. The rest of the objects or things in the space are thirsty and magnetically-pulled to the well, but can’t drink the water. To me that’s terrifying but also just a sci-fi. 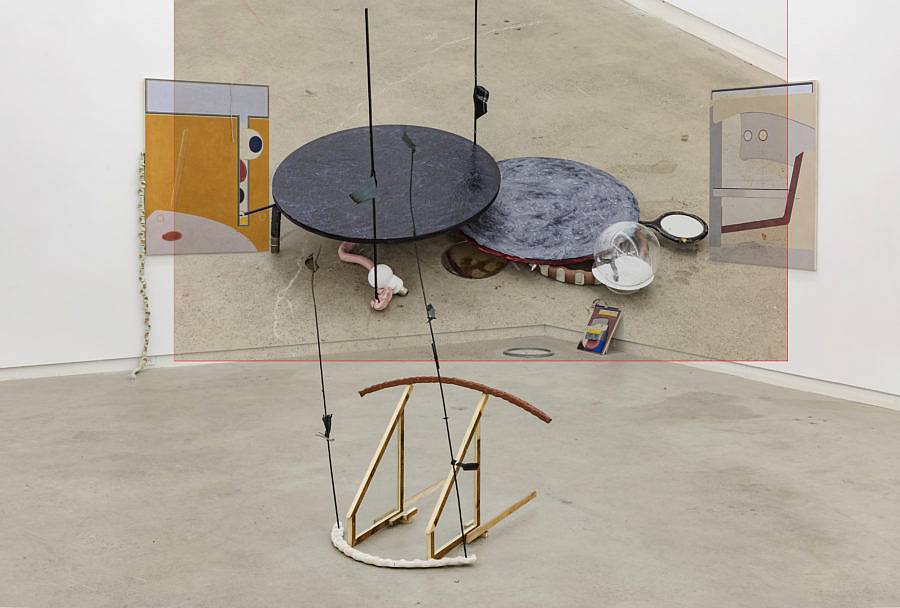 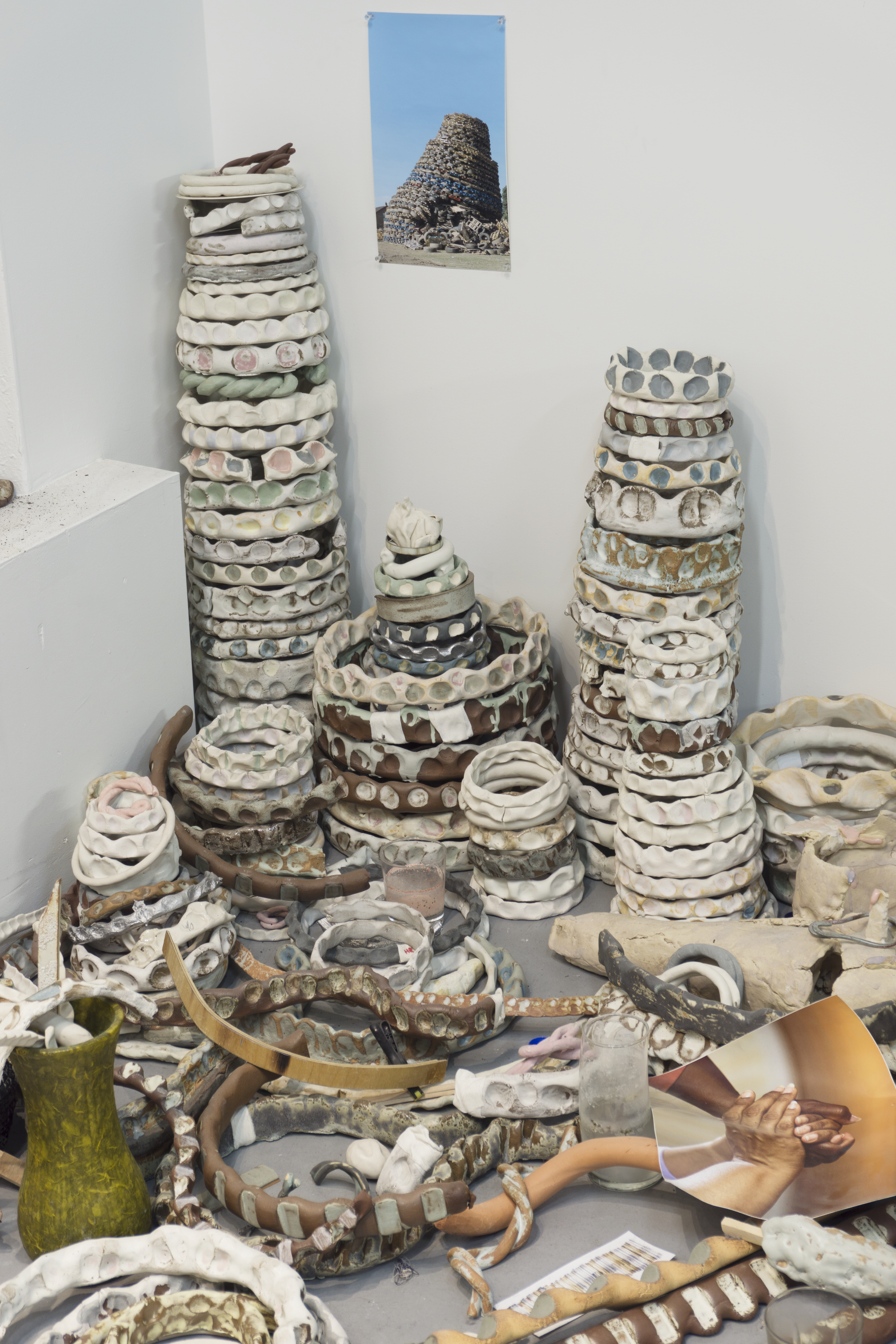 Have you seen any recent exhibitions that stuck out to you?

I went on a quick trip to New York this past week, so yeah I saw many, but for me it was all about the Tomma Abts show at David Zwirner. What a treasure. Honourable mentions would have to be the touching and posthumous Matthew Wong show at Karma and the rehang of the MoMa.

Your work seems to have its own sense of refined logic- what are you drawing from when deciding which objects to place on top of each other, or which compositions to create?

I’m usually thinking somewhere between the narrative and the form. Most pieces have some sort of goal or notion I want to reassure, so the decisions happen from necessity as equally through availability, and the concept of a show guides the other choices. In exhibition mode the individual pieces are more like parts or tools, and all become sort of instrumentalized in context. I’d definitely made the choice to develop a closed-system sort of practice, wherein all parts speak to one another but also are justified and elevated by and in relation to each other, I guess analogous to language-creation. These days I’m thinking of it more as a form or process of worldbuilding. Even though they are at the root pretty similar, I think the reframing is important as I’m over the impulse towards post-structural thinking, how in a sea of symbols things can be construed or put together in any way. It feels like that sort of thinking is an excuse for immoral or unethical behavior, or the proposal that truth is contextual and fleeting or not even existent. But I also recognize that this is how I think and group things together, associatively. I guess there’s always this pull between instinct and desire. Like a burning object as the balance on a scale.

As an absolute lover of ambiguity and a queer person, comftorable in the in-betweens and aspiring to make hybrid objects, I still think it’s important to have intentionality, to not be centrist, to inhabit a voice and bias towards a side. I guess it’s a catch-22, as I definitely think about things as infinitely interconnected, but I also want to challenge my habits of mind.

So yes, there is a logic, but I’m in the process of understanding it differently. It’s a reflex of finding likeness and similarity, echoes in shapes or content, signals in noise, something as another. Come talk to me in a few months!

In terms of composition, I’m looking for shapes and forms that tickle my fetish and fixation side, but are also hybrids between something representational and abstract. Something in the liminal space between, something that implies and hints, like a person under and poking out from a heavy blanket, at once lumpy and limb-y. So as compositional rules, this is how I filter the narrative or representational aspects I want to balance or tame.

I’m thinking of forms and things as contexts, containers for ideas, beacons to organize thoughts. Like clothes on a body, I’m searching for those objects that inform or shape, and guide ideas. Everything fits in it’s own way. 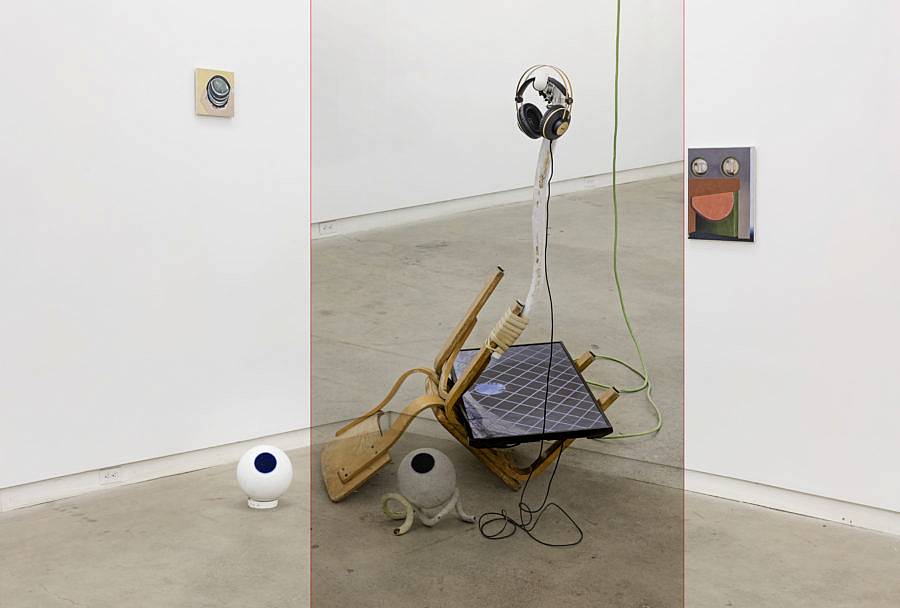 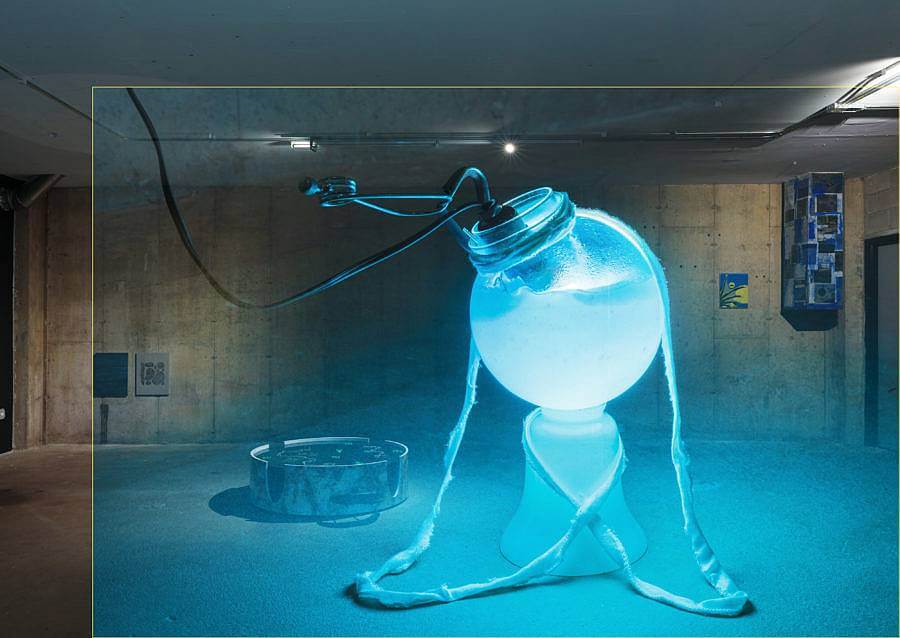 How do your sculpture and painting practices inform each other?

It’s a hard question. I think there’s one half that’s intentional and then another half that’s pretty mystical. I’m really finding how making art helps me find a place in the world, but also as a way to make sense of things and tame confusion, to see through innuendo. I’ve definitely realized the sometimes-selfish approach to art making, and how it can be therepeutic but also educational. Which is to say that I’m looking for patterns and similarities, to try and create some semblance of mental order. I think in the search for similarity you really rather find difference, which is important.

So I may make a wall work and a ceramic, with separate intentions and seperate goals, but maybe there’s some mystic pull between the two, some formal echo or narrative thread that pulls them together. Especially when it’s the mixing of 2d/3d, it feels like those decisions or results are the only option.

The artist Gordon Hall wrote a pretty formative-to-me essay, which in addition to so many things, brought forward this notion of pedagogical sculpture or form; how things teach us about themselves and ourselves. This made a lot of sense, especially to a clumsy ceramicist prone to breakage like myself, that maybe things like to find their own way, that maybe breakage is a material collaborating, that there is an ideal only they’d know. Like with uncovering a secret, it’s finding what’s already there. So in many ways I’m balancing intention and concept with the realities of the materials or the accidents that happen. I can be pretty romantic, I know, but there’s something so special to the idea that to any mark, line or form there’s a perfect balance, or that they could tell us what they need. So even though these are just formal strategies, they guide or give order to my intentions and concepts, my intuition. The notion of adaptation seems really timely, or an answer for the future. Not controlling things but working with them, both as a small and grand metaphor. I’m trying to find truth and reality; something concrete in a progressively-quicksand world. All that to say that I’m learning a lot from the things I use, and they can be pretty explicit about what the want. At this point I don’t find much difference between the dimensions and they just recursively inform each other. 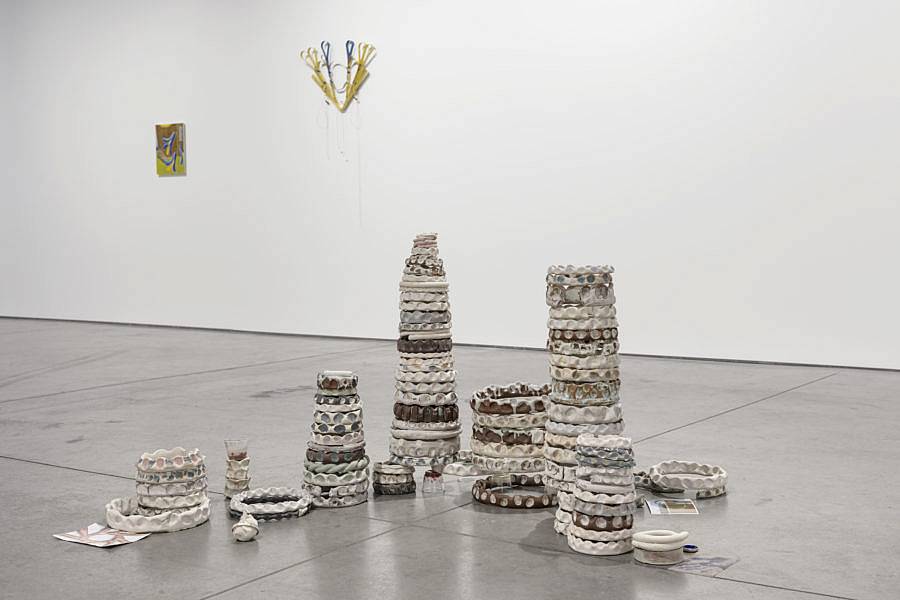 Can you talk about your recent solo exhibition, Sunrise is Crystallize, at Parisian Laundry?

Sure. It was the end of a 2 year cycle, and really felt like the closing of a chapter. The show came from stumbling upon the similarity between an apple, a butterfly and an ear, which was enough to spiral out into this exhibition. I was using that form as a context or filter for different narrative or compositional ideas, and trying to string the work together formally. I’ve been really leaning in to these instinctive and intuitive ideas I have, where finding similar shapes in different things could be a procedural way to build a constellation of images and references. So ultimately, I ended up with these converserial images that traced similarities between ears, hoses, shoe laces, butterflies, apples, feet and shoes, bells and window blinds, as if misheard words in a busy crowd that make their own kind of sense. A shape as a multitool.

As for the installation, I’d used the idea of making a wall between these humongous pillars unique to the gallery, as a sort of guiding light, which eventually turned into wanting to imply a solarium. So the centerpiece of the show ended up being this large sculptural wall thing, with panes of glass covered in oil-tinted vaseline to filter light, various images and objects, and a projection. In a last minute move, I’d made an animation of buzzing flies and used the bulb of the projector to mimic the hot summer sun while the broken static of an old radio mimicked that specific buzzing of insects that only the dead of a July day knows. To complete the cycle of similarity, I added some sticks of butter near the flies….butter flies. 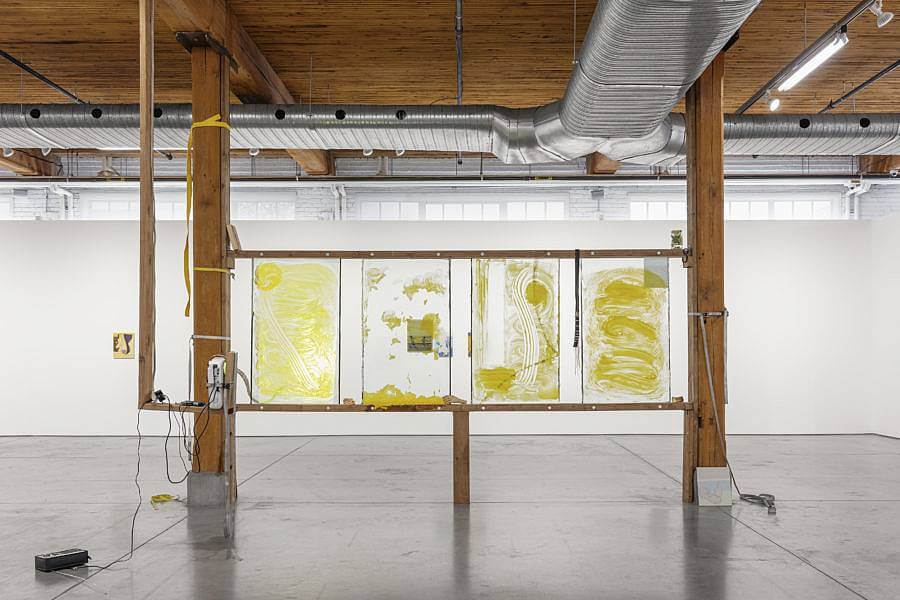 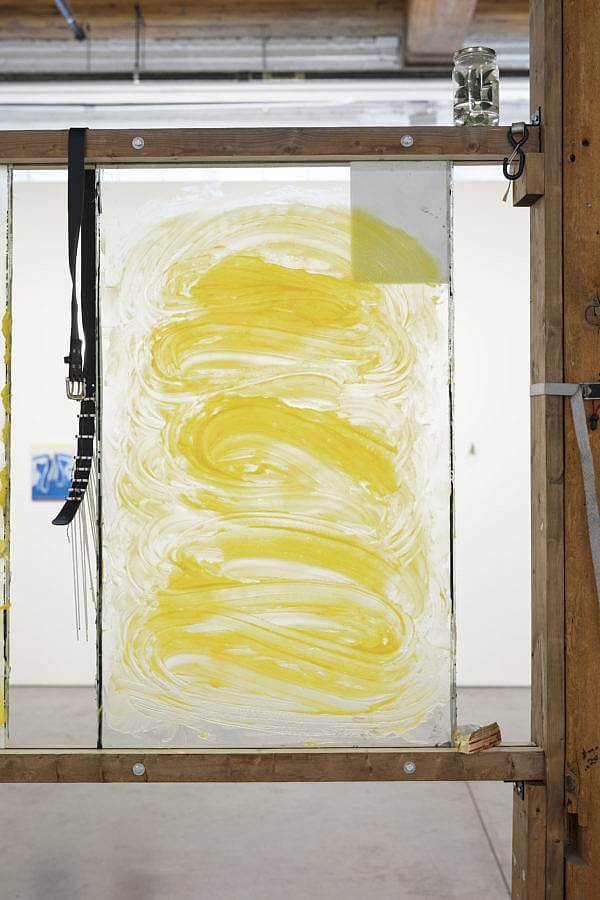 I’ve been reading Gaston Bachelard’s Poetics of Space, at a glacial pace, but mostly just disassociating through podcasts. I think my phone has ruined my concentration, I’m all strung out!

What are some recent, current, or upcoming projects you have going on?

I’ve had a really busy year, between two solo shows, one at Clint Roenisch (Toronto) this past January and the other a homecoming in Montreal at Parisian Laundry, a few group shows here and abroad at Interstate Projects in Brooklyn curated by the lovely folks of Calaboose, with Joani Tremblay and past LVL3 alum Catherine Telford-Keogh. In a year of firsts my work was also brought along to Art Chicago and published in magazines, which was just really cool, surprising, exciting and fulfilling. It’s crazy to me how you can build a world through art, I just assumed life would go nowhere.

Right now I’m trying to get comfortable with slowness again, finding new directions and trying to tackle my ever-bloating lists. It’s nice and a little uncertain, but as the extreme cold sets in I find myself blossoming in my bear cave. Winter flower. Right now my future’s bare. 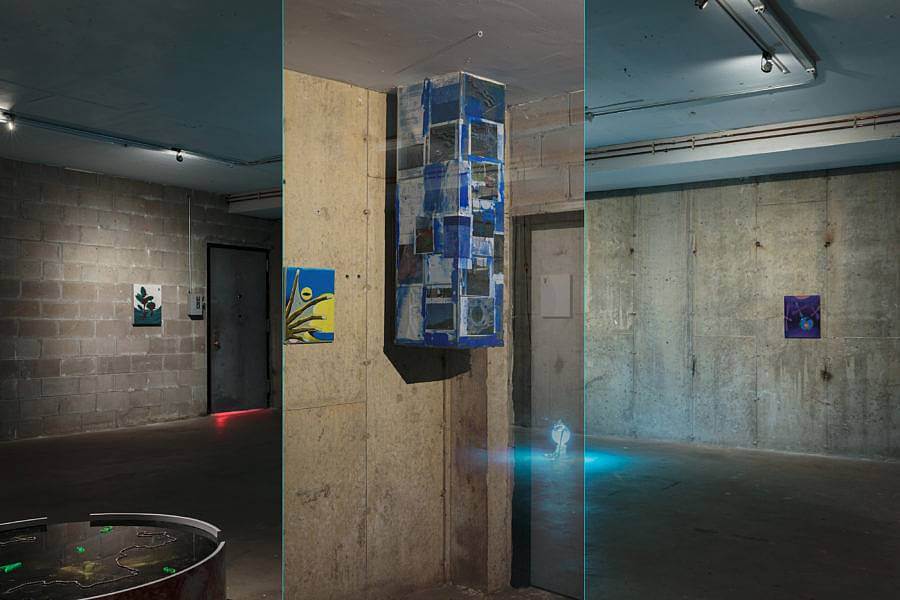