Good afternoon, everyone, my name is Jader and this is my TED Talk. Oh? Ah shit, sorry my bad, wrong gig, girl is #booked and #blessed. Right, interview, pivot and GO! Ok, so my sun and moon are both in cancer, so unsurprisingly, my life orbits a mutable nucleus of emotion. Most of the work that I do draws from this interest in and ability to connect to the universality of the human condition, which is ironic since I’ve spent the last several years being a professional mutant. My practice is rooted in the exploration of the topography of the mind through what has been described as an “uncomfortable camp.” In short, I endeavor to make people feel. Outside of that, I drink tequila, collect impractically loud earrings, and work for a major art foundation in Los Angeles.

How did you get started with Toxic Waste Face?

Girl, the genesis of TWF was divine intervention! So, Toxic Waste Face is the radical performance trio that I manage alongside Pseuda and Scam Likely, and we have had the most amazing interest in our work lately. Last fall we were invited to the Kunsthall Stavanager in Norway to debut our newest work, Sharp Shadow, and before that, we premiered our art film/performance piece The Feed at Miami Art Basel. But back to the question – I truly feel like the universe brought us together. Luke, Nick, and I almost simultaneously triangulated; Nick came over during a photoshoot I was organizing with new-friend Luke, and after that one encounter, the deal was sealed. I think the three of us started making work together immediately. Our aesthetic interests are damn near identical but our personalities are completely different, which makes for a solid team. We share the benefits of a hive mind, where our sensibilities are almost perfectly aligned, but we each bring such a diverse skill set to the table. These two people are my soulmates, undoubtedly.

Over the past year and a half, Toxic Waste Face has applied for and received an “Artist in Communities” grant from the California Arts Council; then in the last two months we have had to completely redesign our deliverables in light of COVID-19. Pre-pandemic, we were scheduled to host an avant-drag and radical queer performance festival in San Francisco with a cohort of 20+ artists that we selected from an open call process. But, given the current global situation and the looming grant deadline of May 30, we instead have made arrangements for emergency artist micro-grants available to all the booked performers, because let’s be real, queer artists (especially those that identify as POC) are disproportionately affected by the economic reverberations of a world on shut down. But, ever-seeking a learning moment, we held a symposium  in March with leading voices in the performance community (Biqtch Puddin’, Mica Sigourney, etc.) to discuss the recent proliferation of digital performances and consider what might be lost – or gained – from these burgeoning online ecosystems of expression.

What is one of the bigger challenges you and/or other performance artists are struggling with these days and how do you see it developing?

COVID-19. With a mysterious virus ravaging the world and preventing folks from congregating en masse, it can be hard to be a performer these days. And really, this is at the core of the symposium that I mentioned above – how do performance-based artists weather this storm and continue to express themselves? I’m going to be vulnerable and admit that I myself experienced a great deal of anxiety about moving to digital performance models, mainly because I’m quarantined alone and a lot of my recent work draws from personal trauma, and I just didn’t want to ruminate on that. I am so grateful for the numerous platforms available for other performers to reach their audiences and put forth their art, but for me, I’ve experienced and processed (on-stage) too much hardship over the past year to find this outlet cathartic. And I’m at peace with that. Currently I’m refocusing my attention on image making.

What is your process when putting together a look or installation?

I’m an all-in personality type, so when I’m preparing to debut a look or a performance, my headspace is totally committed to that. I create a zeitgeist, a universe. My visual language is unique to me. So to prepare for a performance I’m usually spending 3-4 weeks constructing a garment and steeping in the emotion of the work at hand. Then to fully transition, to become a vehicle for the work, I shave everything from my adam’s apple up – head, beard, eyebrows – in order to become a blank canvas for the makeup. I want my audience to be both visually and emotionally arrested from start to finish.

What does the broad notion of “post-humanism” mean to you?

Post-humanism, to me, is the pursuit of transcending the human condition by way of technological, genetic, spiritual or aesthetic enhancements to the homosapien experience. Comically, I came to embrace a post-humanoid visual paradigm in my work to actually make folks connect more deeply with what many people consider the thing that makes us human – emotions, compassion, empathy. The objects, performances, and images I create tease the heart strings; they are an invitation to relate without the barriers that often undercut connection. People presume they identify most closely with those of a shared experience – racial, gender, socio-economic – but when you have none of those trappings to adhere to, as is the case with a post-human persona, you have no choice but to examine the emotional and psychological frameworks at play. Plus, to de-intellectualize this, if you grow up among a chorus of voices demonizing your sexuality or social presentation, there’s something powerful in reclaiming your autonomy by embracing that which is criticized. I grew up in the church until I came out, so it is no surprise that now as an adult, I’m interested in occupying the space of the beast. Humanity is a lost cause. 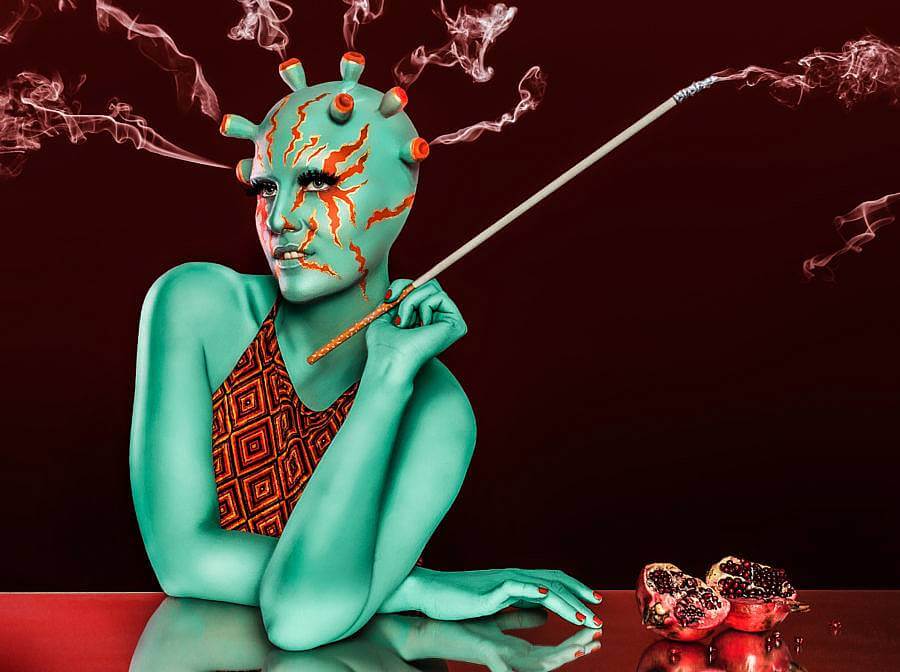 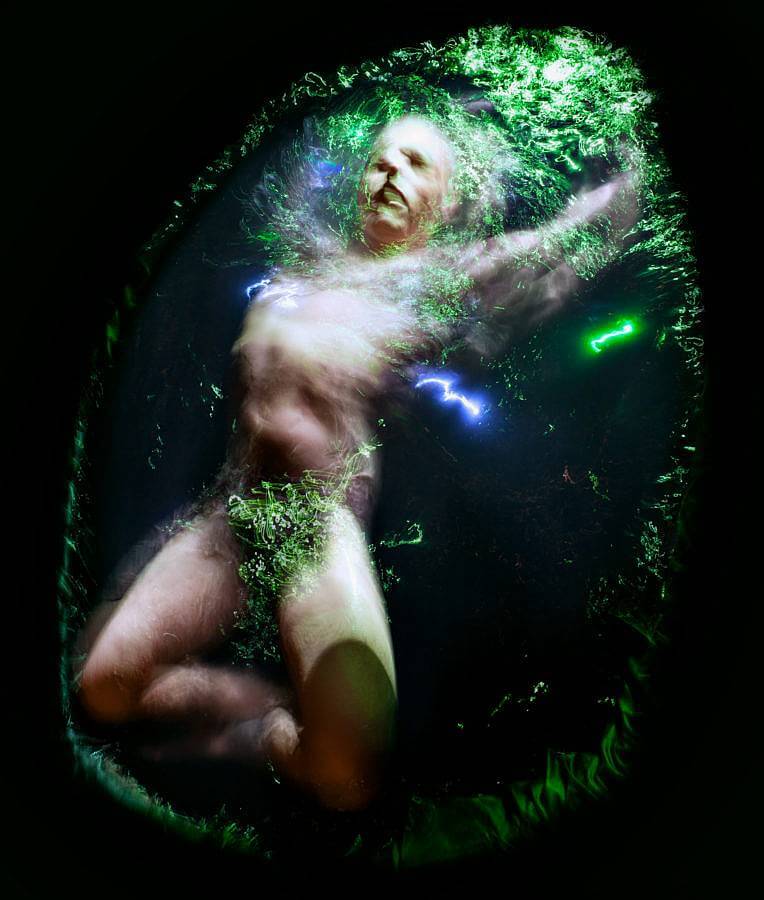 Cults. Failed utopias. Dogmatic brainwashing. Psychedelics. I’m so intrigued by religious fanaticism and the visual culture that supports it. I’m in the beginning phases of my next big project, in which I plan to mastermind my own trippy, hallucinogenic version of nirvana while also carving out a real space for a non-faith-based spiritual communion. I like this tension, of inviting folks to participate in a clearly fictitious space while also encouraging the very authentic expression of the spiritual self.

What are your favorite things about San Francisco and LA?

The Bay Area is such a mood. Truly, my heart never left. I love how small San Francisco feels while also carrying such gravity. Performing in SF, especially at The Stud, feels like you’re contributing to an historical narrative; like, this is where canon was created. I left Los Angeles a decade ago saying that I would move to the Bay and become a successful performance artist. And then that actually happened. And then I got evicted. As wonderful as the Bay is, there are some pretty terrible hetero-normative commerical-ass forces at play that has made it incredibly difficult to thrive there as a queer weirdo – and this was all before the pandemic. But honestly I love Los Angeles – this is where I grew up. I live in Koreatown and it’s so cosmopolitan: it’s walkable (fuck cars), diverse, gorgeous, and feels both urban and laid-back simultaneously. In both cities it’s the people that live there that have made my experiences so stimulating. 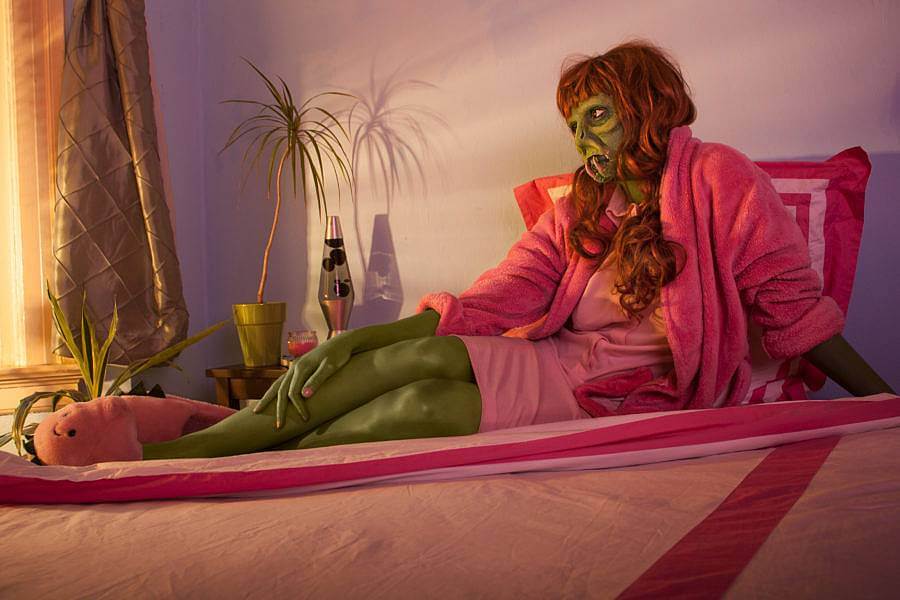 What do you do when you’re not working on your artwork?

Spam my instagram followers with story posts about my beautiful daughter, Parker, who happens to be a cat.

Metallic Taste – Show Me The Body

Got You – Amyl and The Sniffers

Who has been your favorite person to collaborate with?

I’m not sure if you can really call this a collaboration, but I was hosting a fundraiser for an SF non-profit and Kembra Pfahler was the headliner; during her set, she pulled me onstage – her painted blue and me painted green – and we sang/screamed the chorus of Leg Avenue together. That was early in my career and it felt like a nod of recognition from someone in my personal pantheon.

The worst reaction is indifference. I don’t make subtle work so a blasé attitude is a total defeat. I also abhor the word “weird” being used to describe what I or Toxic Waste Face does – not because someone might find what we do to be foreign to them, but because it’s such an empty adjective, there’s no specificity. Plus, so much of what I do has conceptual layers to it, if you can’t get past the discomfort of “newness” then you aren’t able to fully engage. Best reviews: I did a performance where halfway through I revealed that my belly had been pierced by a quiver of arrows, jutting out at sharp angles, and afterwards this very normal-looking man – the type whose parents are probably still married and has never had a hangover – comes up to me and tells me that after my piece he had to go outside and sit on the curb to unwind. Without thinking I thanked him, gave him a bloody hug, and he left; he was a block away when I realized his comment wasn’t intended as a compliment. The next day somebody sent me an instagram post (from this same kid) complaining about the depraved performance he’d seen the night prior – I was so damn proud! If I can make work that wrenches you from the comfort of complacency, then I’m doing something worthwhile.