Marina Fini is an LA based maker and collaborator who graduated from UCSC with a B.A in New Media Performance.

Tell us a little bit about yourself and what you do. I am a multi-media mystic. I feel like an alien most of the time and I constantly feel out of body, like I’m floating as a spirit more than in a physical body. I have to root myself back a lot to nature to remind myself I’m still flesh. I incorporate crystal healing, color therapy and reiki into my physical pieces and spacial environments.. I believe we have so much life force in us all that is suppressed on a daily basis based on expectations, trauma and pressure to maintain certain roles from society. I feel like it’s my duty to help activate people’s ability to be free from fear, heal trauma and help enable freedom and expression in those who cross my path. I feel extremely passionate about spreading color and the use of hyper sensory elements as tools for healing in my installations. Ultimately I produce temporary alternative worlds that involve interactive elements to essentially guide a thought process that there is no limit of dimension and thought. From these worlds, I collaborate with a lot of other amazing people that I find a soulful connection with. I love community and building a source of escapism with my friends with my photography and film productions. I like to also make wearables so everyone can feel like they are apart of something even if they haven’t been transported into one of my spaces yet.

What materials do you use in your work and what is your process like?  I work mainly in plexiglass for building my sculptures, accessories and sets. I laser cut everything myself with a lot of love, attention to detail and intention. I build mostly everything from scratch with the help of some angelic friends and collaborators varying on the project. I shoot on film and digital cameras and specialize in analog techniques with image making. 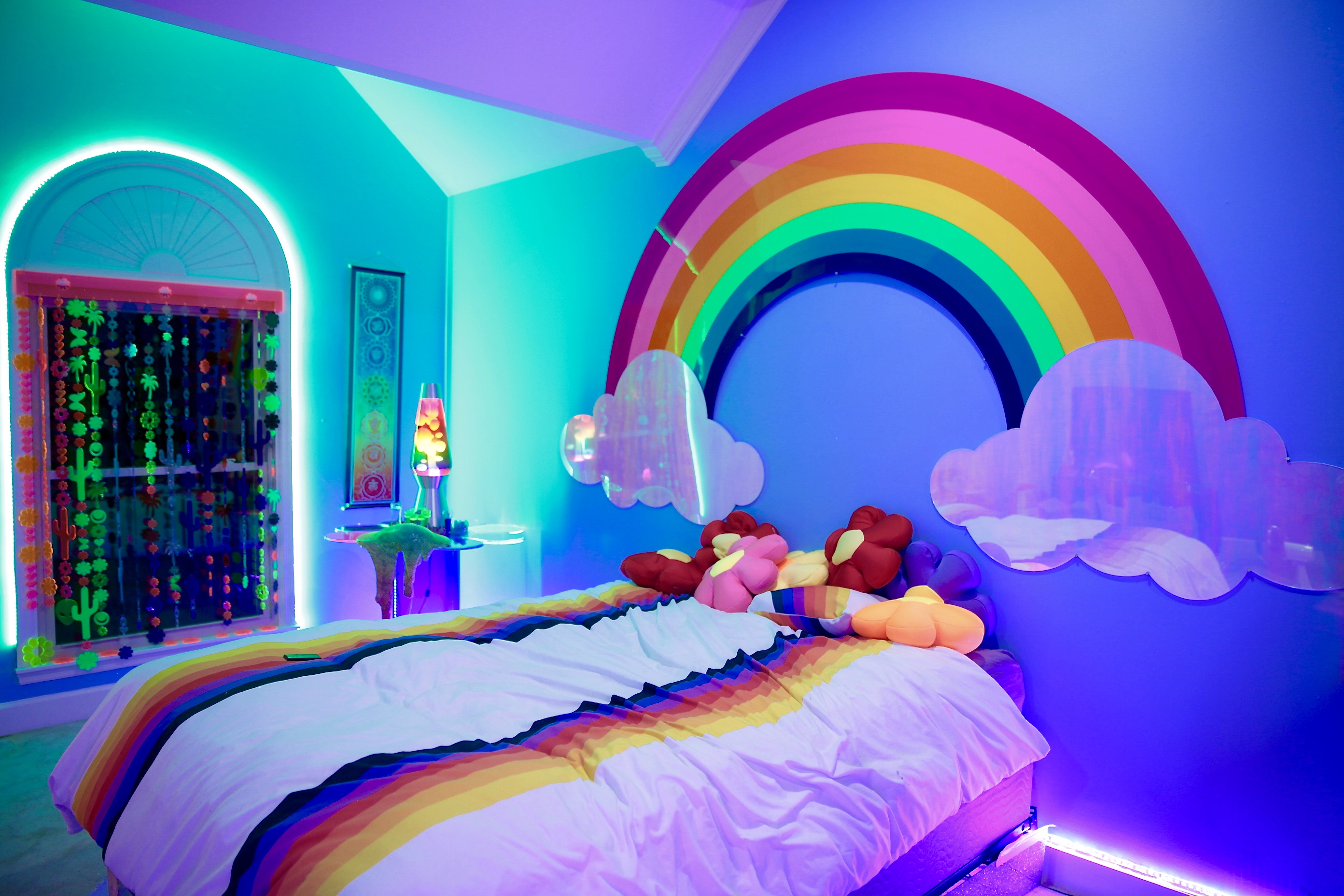 What are some recent, upcoming or current projects you are working on?  Last month I did the largest scale installation I’ve ever done in my life, held at Heron Arts; which was so rewarding, exhausting, painful, emotional, but so worth it in the end. It was probably the most personal show I’ve ever done because it felt like my entire childhood up until now spread out in a giant warehouse. It was like the public saw my soul essentially which was kind of scary, but also really beautiful at the same time. It was called, Secret Paths to Marina Fini, which the title alone is based off of a video game I played on my purple iMac as a kid in the late ’90s. The entirety of the show dealt with my internal struggle of nature vs synthetic and analyzing our relationship, or better yet our lack of relationship with nature, and our eternal desire to truly find organic connection in our computer life. I had several iMacs throughout the show that played my original videos acting as altars, containing crystals and personal objects on my plexiglass tables. I also had the game, secret paths to your dreams installed on one of the iMac computers so people could really feel my nostalgia and how the game totally inspired the birth of the show.  As you enter the space you start at a holographic pathway that curves into a forest, as you walk and interact with sound triggers connected to plants and hidden steps, while several screens are playing symbiotic video. You end up into an aquatic area containing a heart tub altar as it guides into a desert flower land exiting through my giant 10ft rainbow. It was everything I’ve ever loved all purged into a room.

My upcoming shows include a show held at Mount Analog in Seattle for the month of November. Colleen the owner approached me about doing a recreation of my first show, Motelscape, because they are releasing a photo and poetry book about motels across the country. I loved the idea and now I’ll be living in Seattle for the entire month and working on my first book with them, which will include never ever seen photos and a sort of time-lapse of work from the last 7 years. After I leave there, I’ll be headed to Denver to do a show at Spectra Art Gallery in January that will be similar in theme to the show I just did in SF but maybe with more weed theme related pieces. 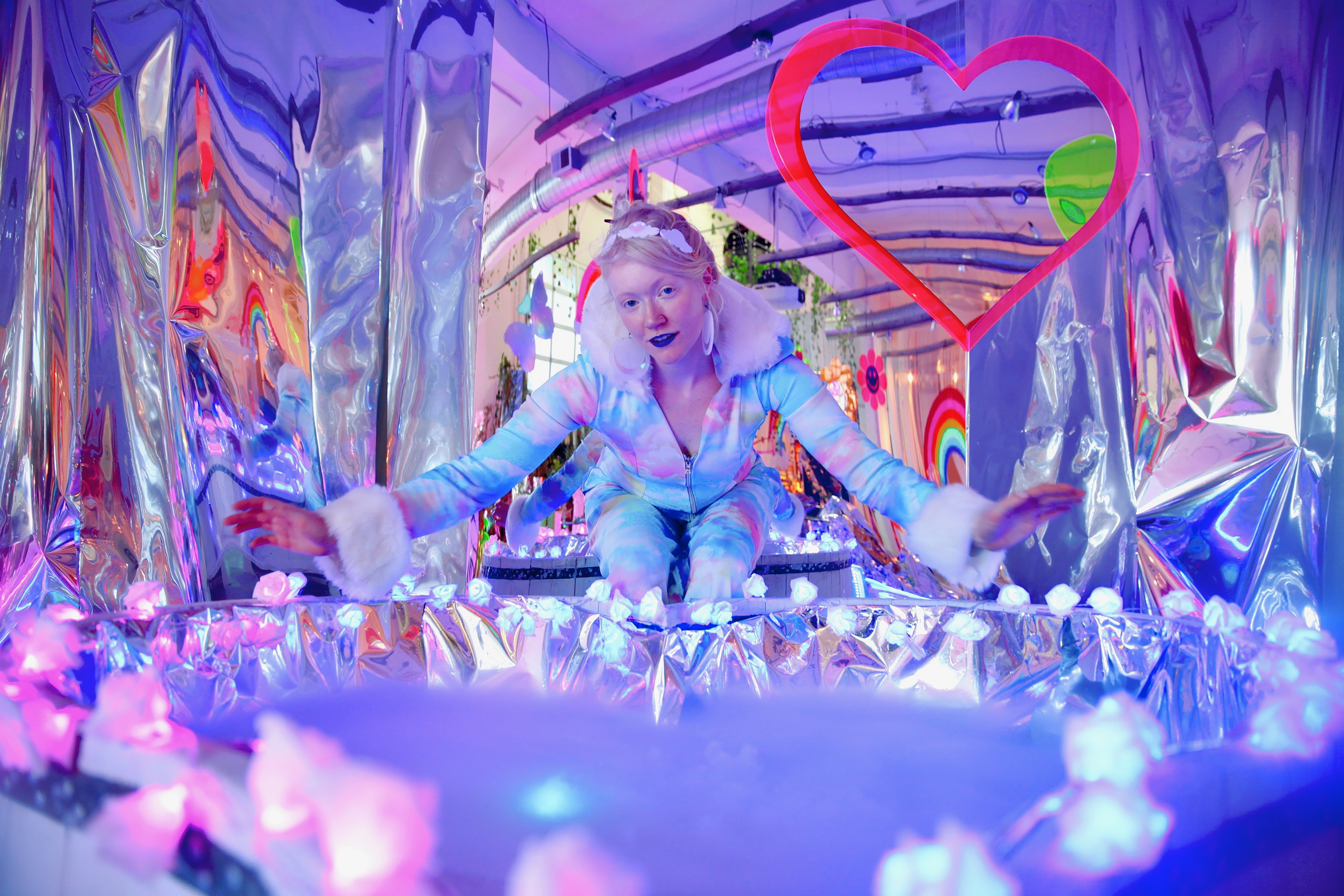 What is one of the bigger challenges you and/or other artists are struggling with these days and how do you see it developing?  Funding and opportunities for women, POC, and trans artists. I see this changing on a minuscule level but nowhere near where it should be, especially in fine art and film. I’d like to help spread awareness and funding to those to want to create who just don’t have the means to. I’d love to help keep arts in schools, especially in low income areas where the arts can be the first things to go, when it is so vital. There needs to be more representation in the art world, it grosses me out that less than half of museums show work from women and even less from POC. We need to fight for diversity in the arts, it’s essential for our historical authenticity.

What do you do when you’re not working on your art?  Usually I’m adventuring on road trips, chilling in the desert/forest, catching up on cartoons, writing, planning my next show or project. 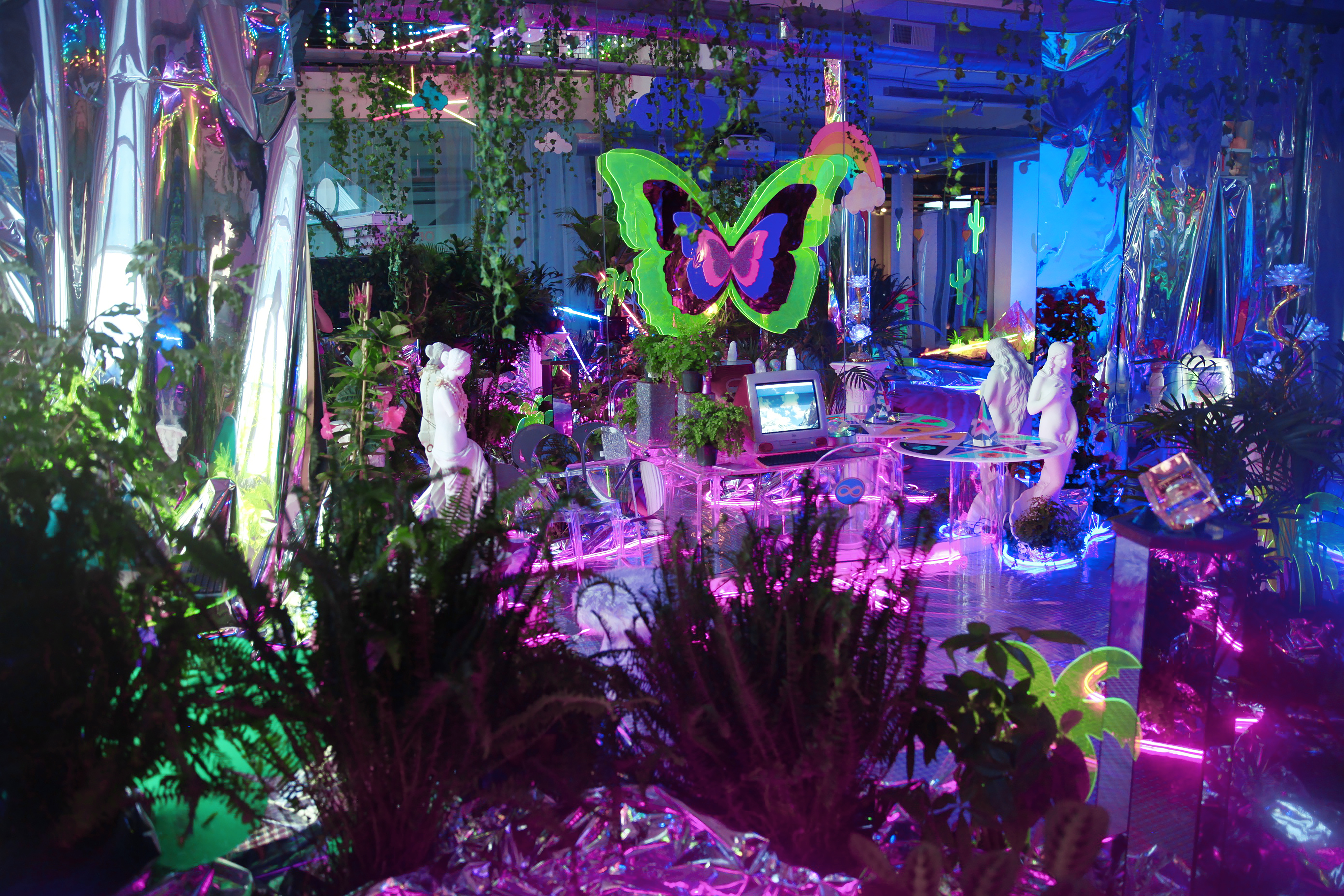 How did your interest in art begin?  Out of the womb… both of my parents are creative and always inspired me to create. I grew up on set my whole life because my dad works in TV and I kind of have production in my blood. I grew up in the commercial world of Hollywood and I’m very anti-establishment/ anti-Hollywood when it comes to art/film. I studied film in high school then went on to study it at UCSC which to some is unconventional if you want to make it in the industry. But for me it was the best thing I could of done. I had the most supportive teachers who were documentary and experimental filmmakers. The type of mentors who want to see something unique, diverse and challenging to the social construct of what is expected in film. It was so refreshing and eye opening to be in that environment after what I grew up with. Studying queer theory and gender studies within cinema totally broke down so many doors in my mind as well helping me analyze where our subconscious lies with the construed version of gender roles in our world. I finally saw the evil in film and felt like it was my job to help change what is being put out into media. I never went into film thinking I was going to make money, I went into it because I wanted to give a voice to those unheard, unseen and passionate.

I feel like learning how to build costumes, sets, interactive sets for my films/photos, led me to wanting to share that experience with others so they could feel like they are apart of something. There’s nothing I enjoy more than bringing people magical realism, community and empowerment. Creating healing installations gave me a whole new purpose with my art. 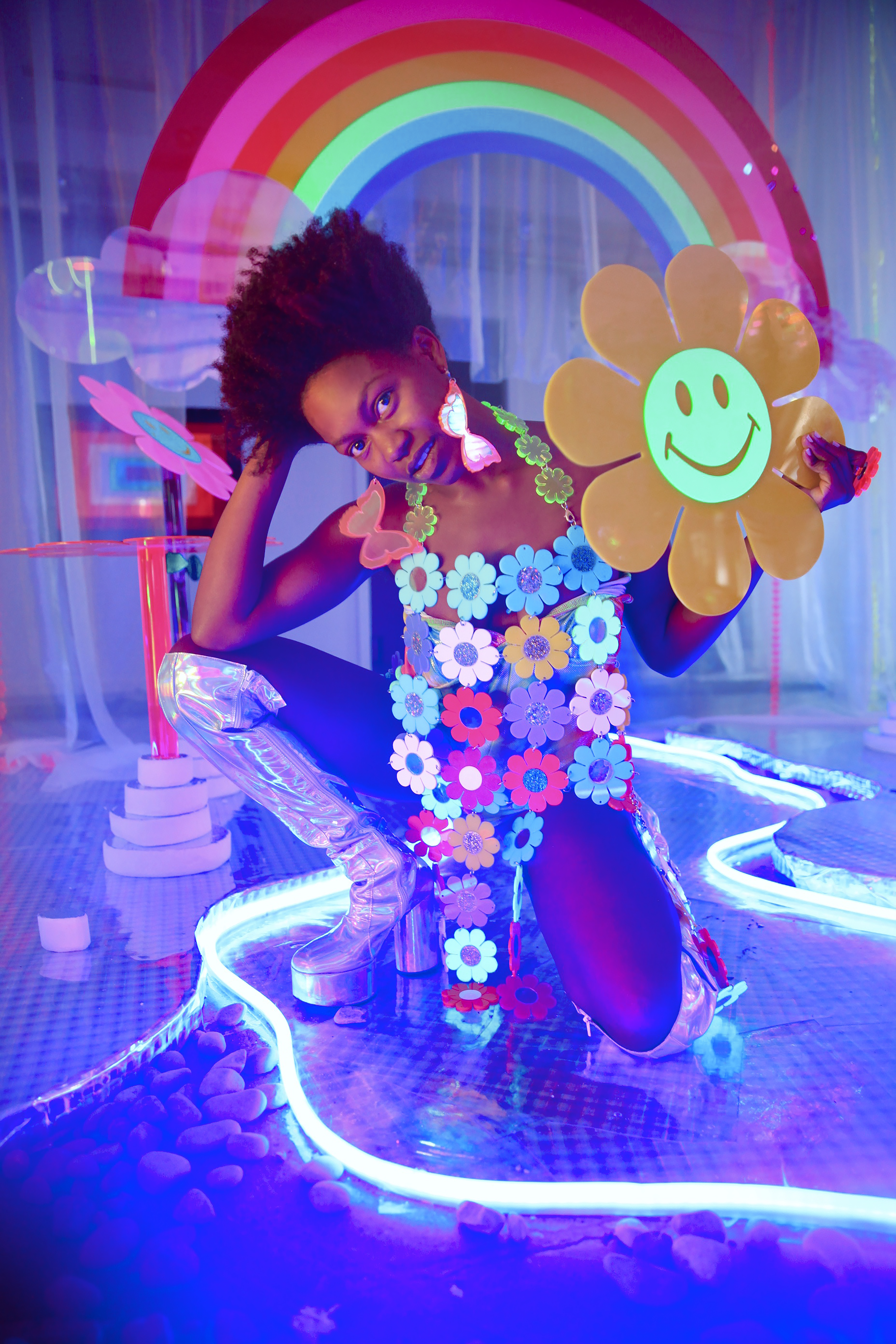 If you had to explain your work to a stranger, what would you say? Escapist psychedelia spa for the seeking soul.

What are you listening to right now? Dream Chimney on Soundcloud. 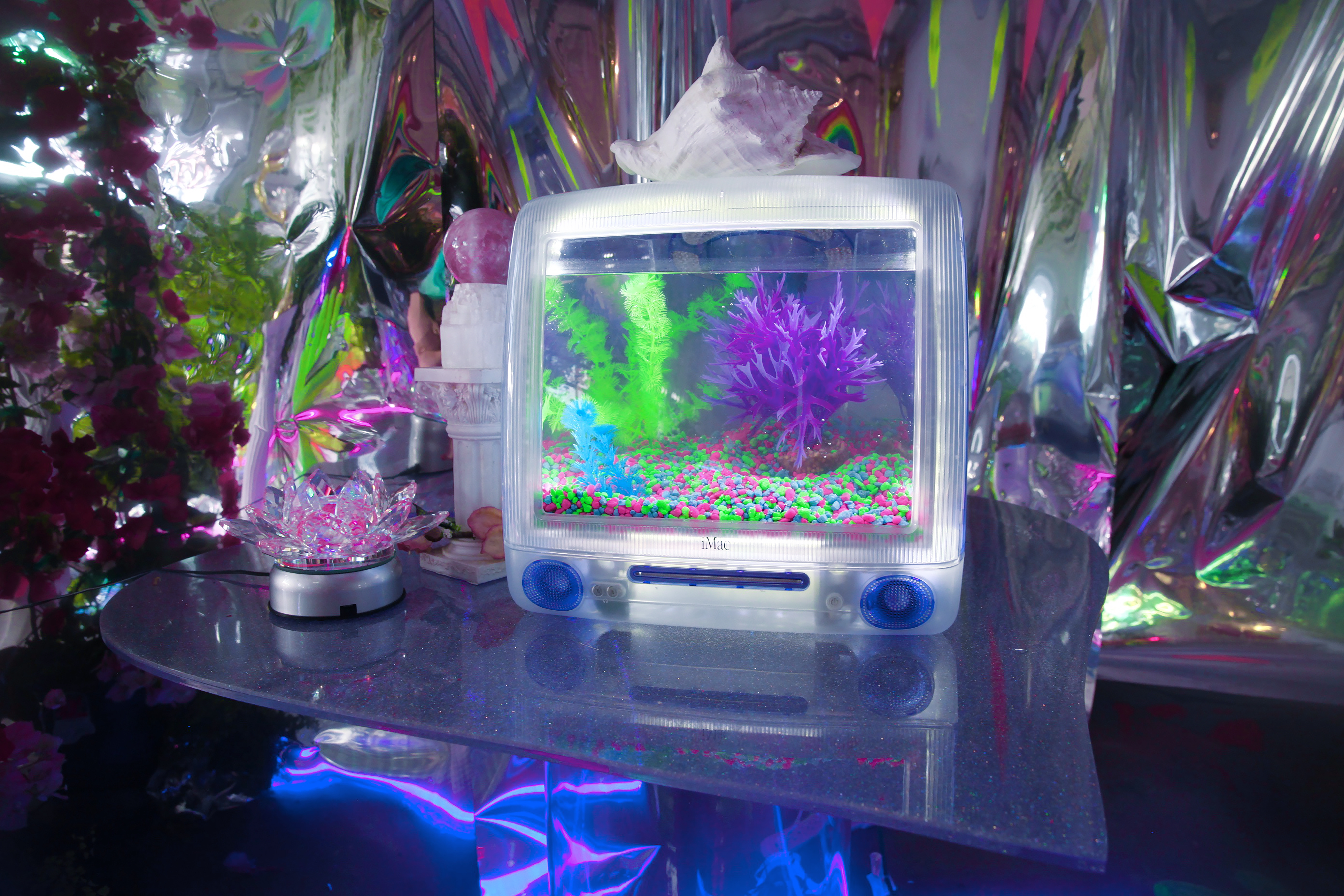 What was the last exhibition you saw that stuck out to you?  Samara Golden’s show, A Trap in Soft Division, at the YBCA in San Francisco and Gretchen Bender Total Recall at the Hammer Museum.

What artists are you interested in right now? All of my friends, there’s too many to list. 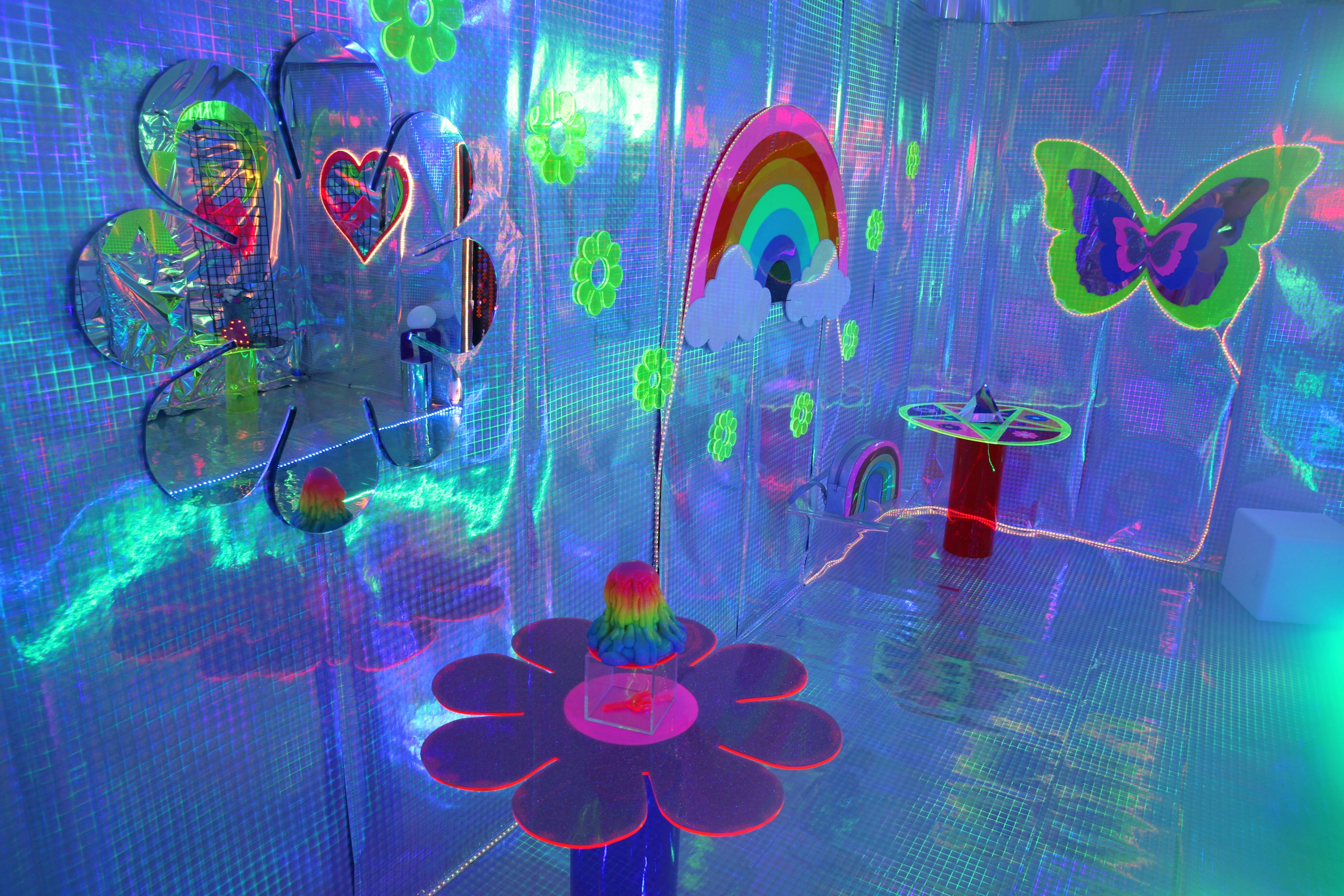 What’s your favorite thing about LA? That it’s a melting pot of diverse voices and artists. I love that it’s an international destination so I’ve been able to meet so many online friends from all over the world because of that.

What is your snack/beverage of choice when working in your studio? Green tea to stay awake, Smoothies to hydrate, gluten free pizza, cannolis, vegan ice cream, veggie burgers, dipping veggies in garlic sauce. 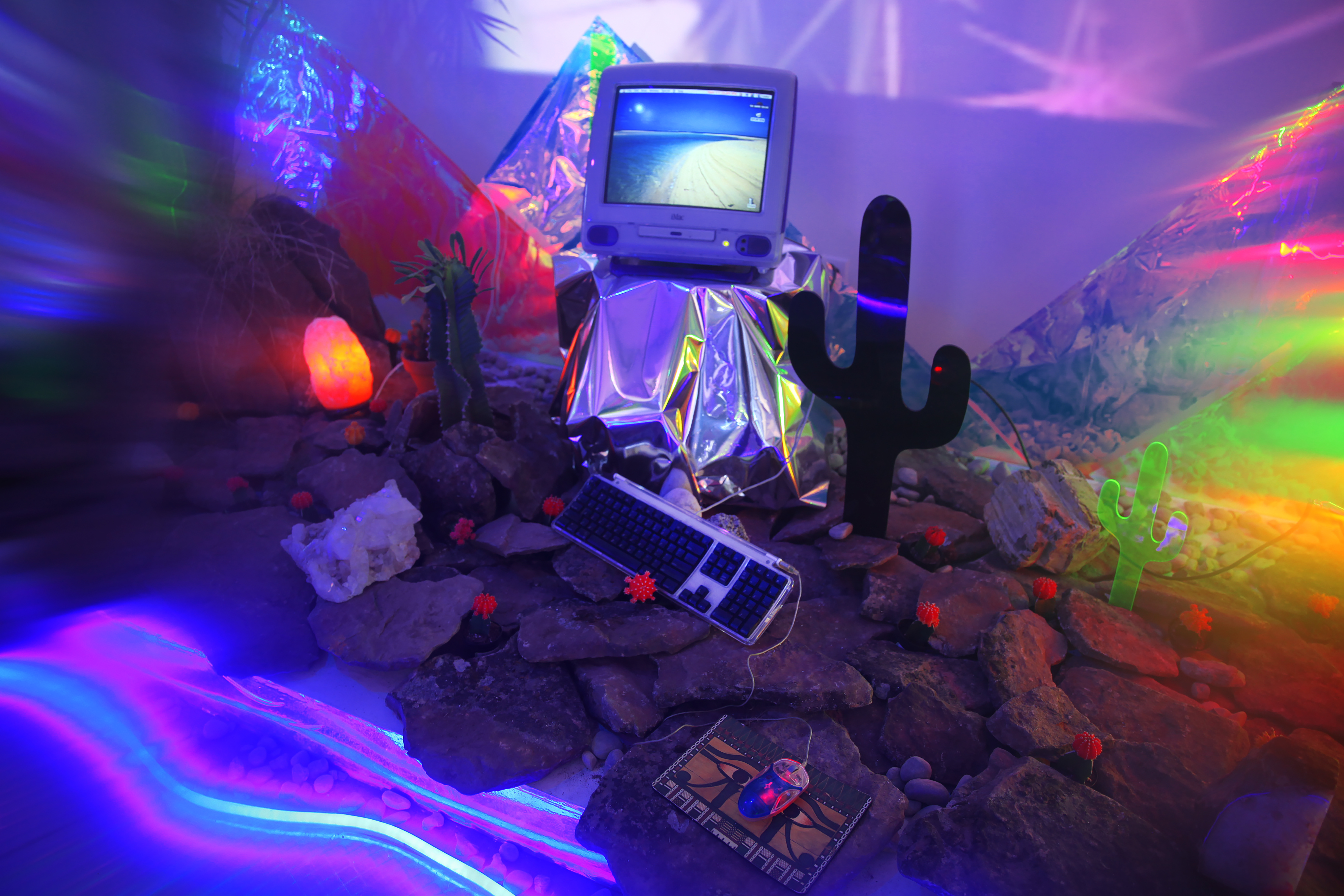