I was born in Rio de Janeiro, Brazil, to two Brazilian parents. Soon after I was born, we moved to Washington DC, which is where I grew up. By the time I was in high school in DC, I knew I wanted to be an artist. I was still interested in other fields, but more out of curiosity rather than career, so I chose to go to a liberal arts college where I studied and double-majored in psychology and art. Growing up, I went back to Brazil a lot and spent big chunks of time there. A few years after finishing undergrad, I started my MFA in sculpture at VCU. I’ve lived in New York for almost six years since grad school. I’ve been making and showing work here and also working part-time as a prop stylist on a television cooking show. 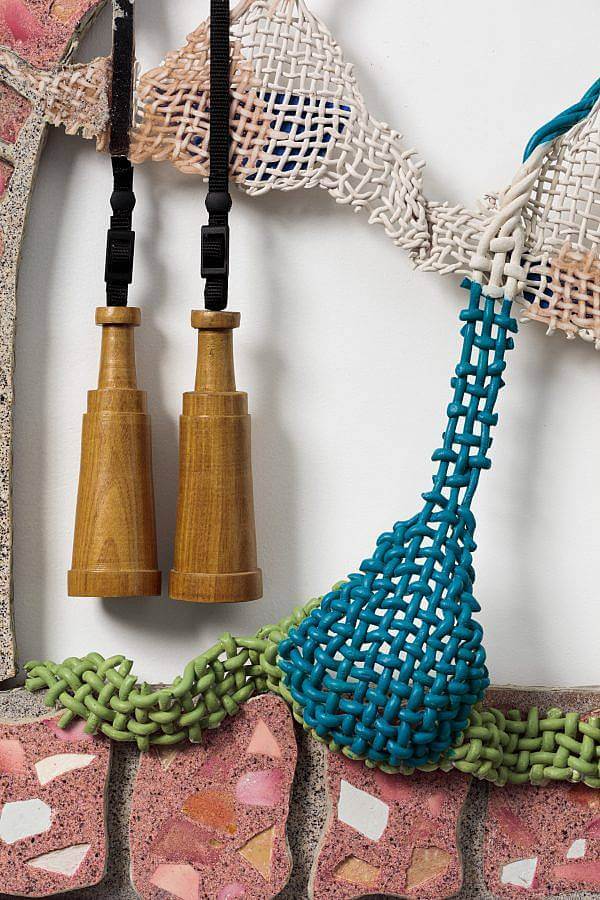 A recent project I’m really excited about is a small book edition I made with artist and friend of mine, Milano Chow. The book has printed images of my ink, colored pencil, and gouache drawings, and the cover is a flocked woodcut print that I made. It was fun to work with Milano and focus on my drawings exclusively, since they tend to be a B-side to my art practice. I also recently did a solo project at Triumph Chicago, which closed in June of this year. There are a few threads from that body of work that I am continuing now in the studio. For that show, I made a large sculpture titled Bunion, Twofold, which had an architectural arch structure with an amorphous figure inside. I’ve never really worked in series but I’m excited about making more figures like this, each one having its own sort of vernacular, if I imagine each one as a different “house” for different female figures and personalities. Right now, I’m settling into my new studio and I’m excited about making new low relief works that incorporate imprints of the body, which is a continuation of what I began to do in some of the work for the show at Triumph.

What is inspiring your practice and material choices right now?

I’ve always been drawn to synthetic materials. It’s funny that synthetic materials like silicone or plastic are the ones that can resemble the human body or human skin the most. I’m currently thinking a lot about that contradiction and mimicry. I’m consistently inspired by architecture, design, and fashion. Specifically, postmodern and utopian architecture is something that I look at and read about a lot. Recently I’ve been looking at a lot of British rings from the Victorian and Georgian eras. I’m really inspired by the sculptural and material qualities of them as objects. They are super complex, and almost architectural in their structure. I’m getting excited imagining them as grand cathedrals when scaled up.I’m also starting to look at Gothic altarpieces. A recent visit to the Met sparked this interest for me. I’m not a religious person, but have been exposed to catholic and religious painting in general for many years in art history classes and through going to museums so much. But for some reason I just recently started caring about them formally and more in depth, and particularly Gothic triptychs. I love the way they are structured, and how their symmetry inherently references theater. Their silhouette and form also calls attention to the central figure and creates a hierarchy based on its relationship to the images on the two flanking panels. This is something I’ve been really interested in in my own work, creating a hierarchy or logic within the images and materials I use. 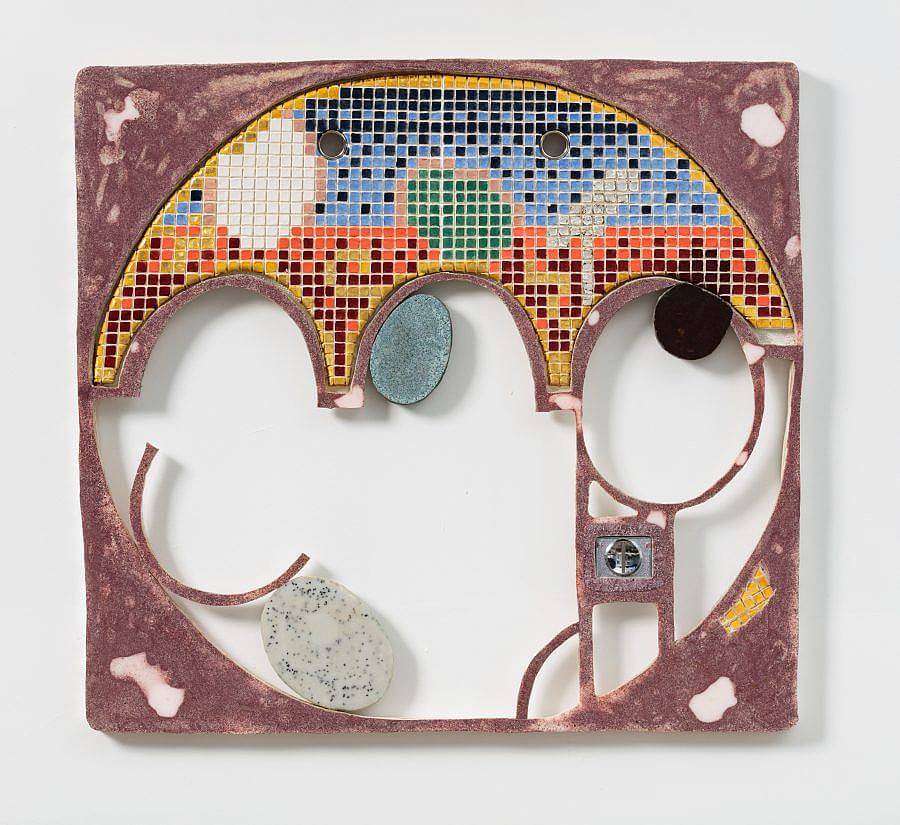 My interest in art began at a very young age, but came first through a lot of exposure to craft rather than fine art or art history. My mom used to be a ceramicist and is a very hands-on creative person in general. She used to teach ceramics in our basement when I was younger and would also transform parts of our house in really whimsical ways when she wasn’t at work. She would make mosaics on the bathroom floor using broken plates and mugs from our kitchen.  Later, when I was in high school, my world opened up when I was introduced to Oldenburg, and later Rachel Harrison and Jessica Stockholder. That is when I started to realize that there was room for a person to make whatever they want. I realized that I could chase after an idea and it doesn’t have to be more than just that. 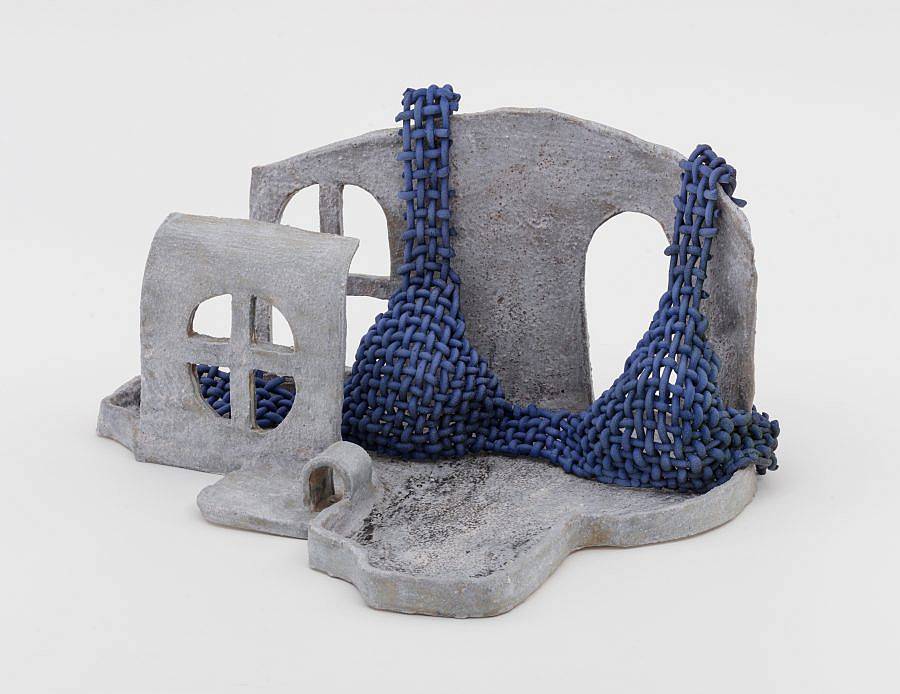 My process looks like something between traditional sculpting, cooking, painting, and collage. The image is whole in my mind, but the labor in the studio involves making (or occasionally finding) separate objects, knowing that they will function as part of a specific whole that is the finished piece. The way that I resolve each work is different. I’m really interested in how an object can be more than one thing and can waver between one reference and another depending on its context or scale. For example, making a cheese board that is also a window or the way that a mosaic wall has specific cultural references depending on the tiles, but then it can also look like a pixelated image on a screen.

I usually set up my studio in a way where I can work on the different elements of a piece simultaneously. I’ll have a table for working with clay, and a table for casting and mold-making, weaving, or developping surfaces. If you think of it like preparing a meal, once all of the separate elements or “ingredients” are prepped, then they can all come together for the final composition of the piece or the “finished dish”. Once a piece is pulled out of its mold, I then look at it and make decisions based on what it needs in order to get across what I want it to get across. For example, I will sometimes cut portions out that seem unnecessary or drill holes or cutouts if i feel like the work needs to breathe. Some objects, whether found or made, I reserve to add to the piece at the end, if I want it to sit on the surface rather than being embedded. It’s difficult for me to describe what my process typically looks like because each piece follows its own idea and has its own needs. I can say, that with each work, I hope to get closer to describing this indescribable feeling or place, one that has a specific attitude and points at the psychological distortions of being a body in our designed world. 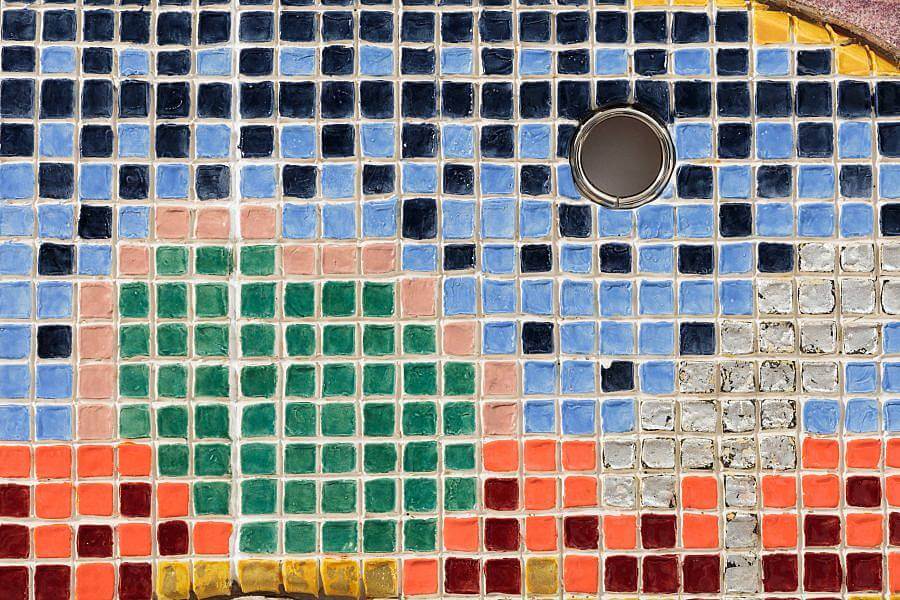 There have recently been a lot of shows popping up of artists that are no longer living, that have had very few comprehensive exhibitions of their work. One being a recent exhibition of Alberto Savinio’s paintings at the Center for Italian Modern Art in here in New York. Another show I just saw that has had a huge impact on me is Gertrude Abercrombie at Karma. This work spoke to me so much, it’s one of those rare shows that I see and it makes me feel comforted, like I am not alone in the things that I think about or in my relentless pursuit of making work, the complex feelings of being in the world, in your own mind, identifying and existing as a woman. Despite these works having been made in the 40s and 50s, this all somehow translates. I love the the dark palette of her paintings, how it’s nighttime, and you can barely see in some of them. They are puzzles, and it seems like the concern for her was never to “paint well” but to get the intricacies of her inner world across. 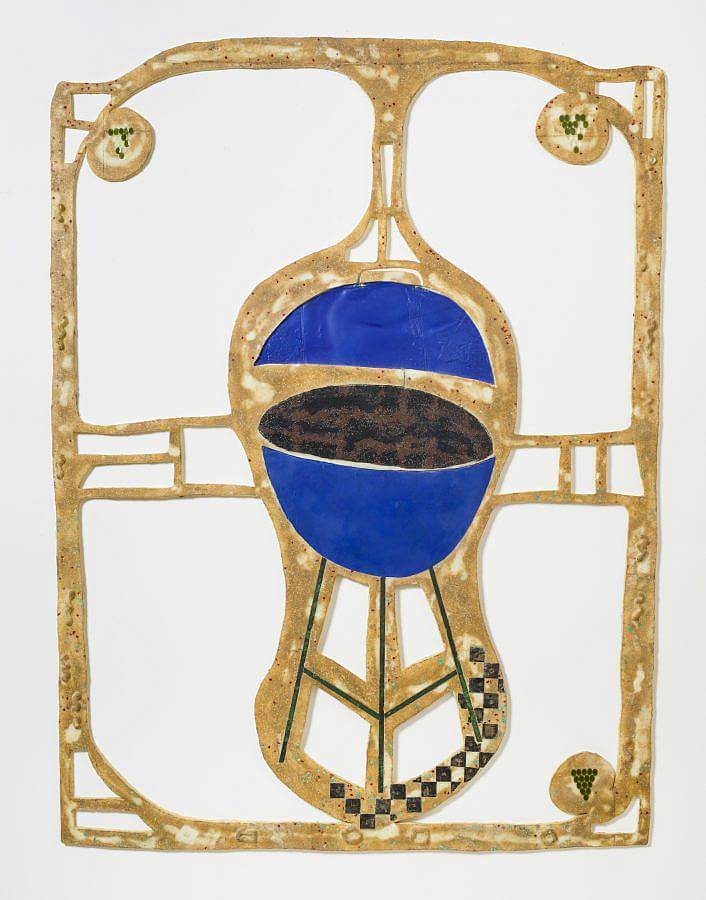 What is the best piece of advice you’ve ever received?

To never get in my own way and to be patient and generous with myself, because as a working artist, there are enough external obstacles blocking your way.

Do you collect anything?

I have a growing collection of eggs from a variety of birds. Most of them are gifts and are real eggs that I consumed and kept the shells of. I know I’m not alone in this but I’ve always had this metaphysical fascination with eggs as a consumable thing, as a symbol, and as a form. 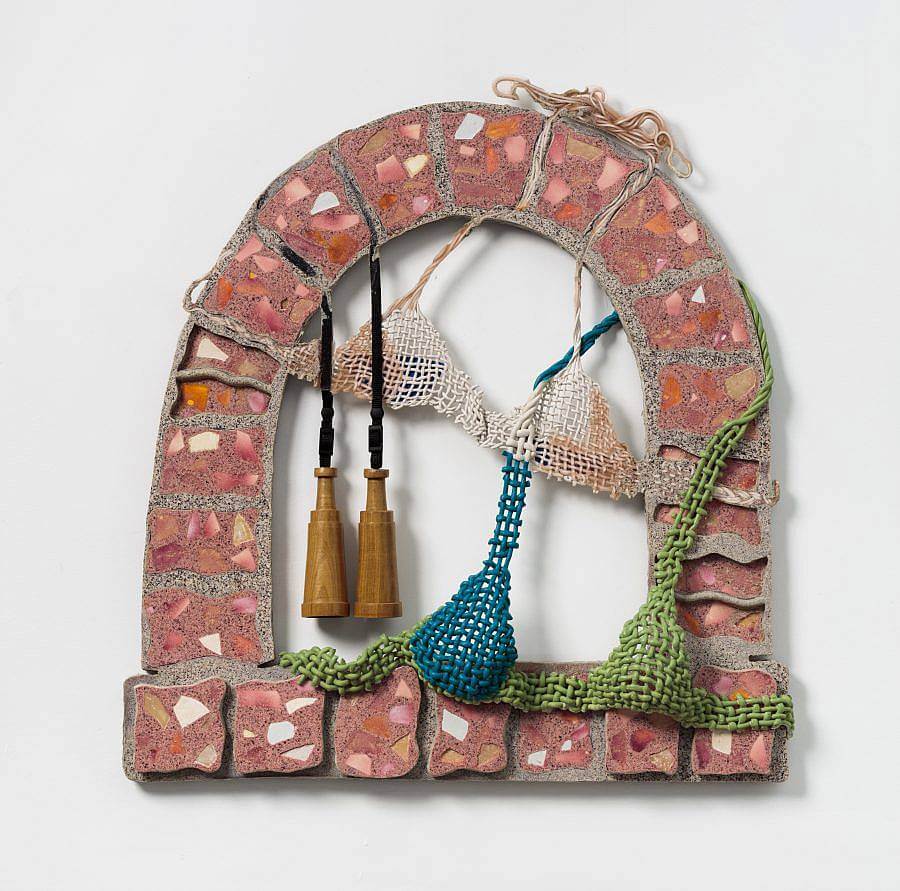 What is it like living and working in New York?

New York is its own particular beast of a place to live. I feel like it eats you alive and feeds you at the same time. It has so much to offer in terms of culture and is like this bank of young artists, old artists, bad art, amazing art, invisible art, exciting young dealers, blue chip traditions… This abundance you have access to living here as an artist is perfectly matched by a brutal uphill battle for good quality of life. In terms of the art world, speaking from my own experience, New York has this way of making you feel like all that matters is here. It’s hard but important to come up for air every once in a while.

Right now I feel completely spoiled by my studio situation. I recently moved into a space at the Sharpe-Walentas studio program in Brooklyn. I can see the East River from my window and the Brooklyn Bridge a few dozen feet in front of me. I have so many other amazing artists in the program as my neighbors. It all has a really good energy. Inside my studio walls, I normally go back and forth between having my finished work around me while I work on new things, and keeping it out of sight. Sometimes I need emptiness and blank space in my studio in order to produce new things, and other times I like having the comfort of finished work around me to motivate me and remind me of certain ideas that I want to refer to. I work mostly on tables but sometimes on the floor. I find working on the floor to be very freeing, I feel like my body becomes engaged with what I’m doing and the scale of the work in a different way. I like having books around, especially artist monographs or design books, and I also like to have studio plants and snacks! 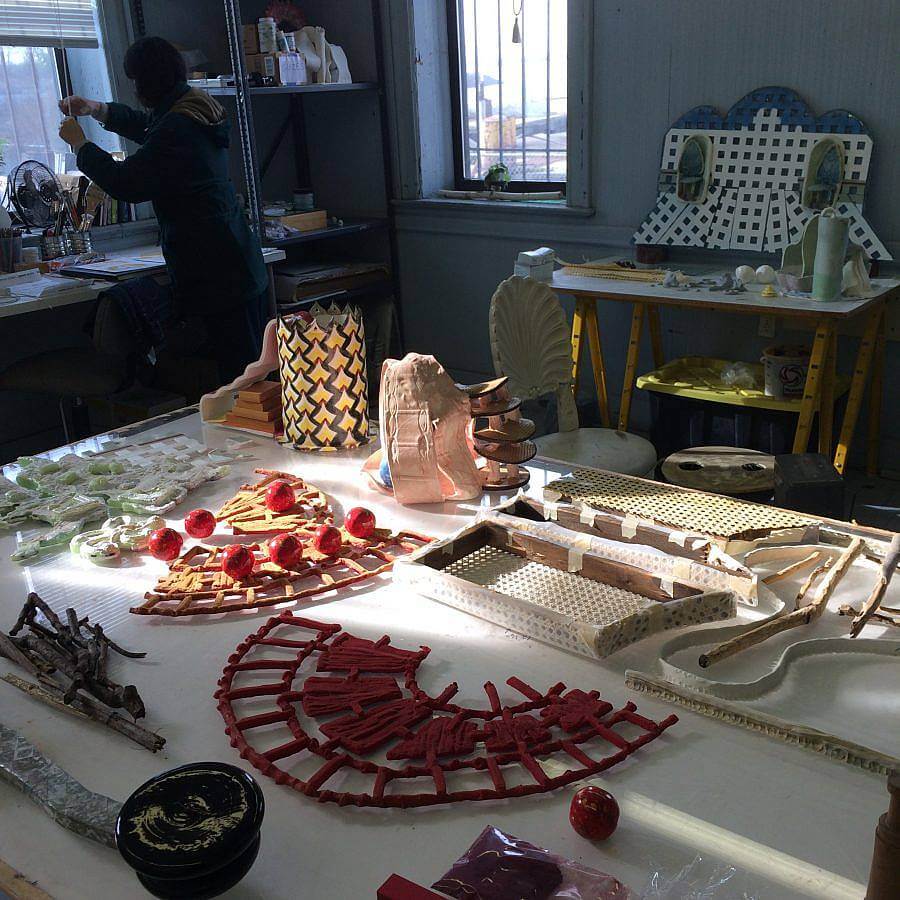 I’m trying to see this opportunity of moving into a new studio as a new chapter for my work as well. The timing and change of setting feels right to pursue a new body of work. I have been using urethane as a constant material in the studio and as a vehicle for, in a way, reconciling all of the elements and images that enter my work. As an exercise and as a challenge to myself, I want to move away from this as a solution for a composition, and consider other ways that I can distill the object and imagery I use. I have slowly been moving away from the wall and making discrete objects again. I think the subject matter that I’m working with is becoming more overt and clear, I’m trying to consciously not be afraid of being dumb or flat footed by simplifying and being direct in the work. 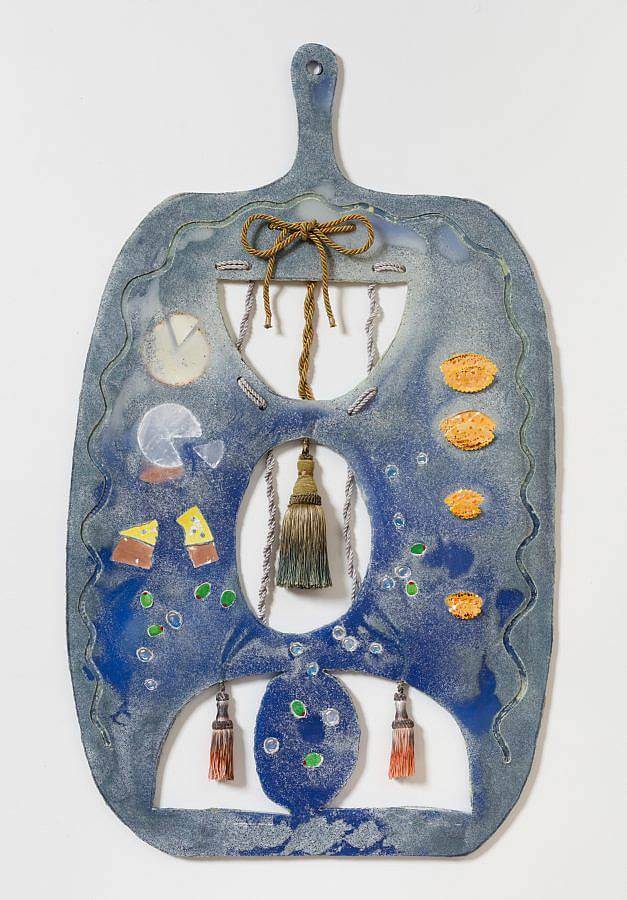