I’m a thirty-something interdisciplinary artist. I’ve been known as a lowbrow performance artist, self-published writer, entry-level actor, animator, and now an artist with an MFA from UIC where I zeroed in on sculpture.

I work with a perpetually tentative collection of sculptural objects primarily made out of wood wrapped with leather, vinyl, and acrylic to frame artifacts from my life: pay stubs, receipts, expired foodstamp cards, student loan repayment statements, essentially anything that illustrates my poverty, along with receipts from Blick and Home Depot, to cite the elements of my creative process. My work shifts from formal and spatial concerns, to operating as a means of detailing the state of my life, and pointing to the collection itself.

This bundle of material is continuously edited according to my whim at that moment. One piece will be made and loved and then later stripped down and reupholstered. I keep everything I’ve built and incorporate it into new assemblages. It’s like making a compost pile to make art with, there is a sediment of the collection’s history on display which also serves to hold it together.

I’ve lived here my whole life, literally in the city of Chicago and I’m CPS-educated.  When I started going to SAIC for undergrad I noticed that the city was being swarmed by people my age from all over, taking it over in an unsettling way, But I soon realized that Chicago has always been like this. Everyone says that it’s a nice place to live because you can live cheap and make work. Which I guess it true but I have nothing to compare it to as I’ve never lived anywhere else. I like being able to skirt by on flexible labor and being able to have an apartment and a studio without feeling like too stressed out which I hear is how it works for someone like me in the other two big cities.

I guess Chicago was fun growing up in because it had a lot of art programs like Gallery 37 and Marwen which let you meet other young art people before they moved away to someplace else.

I liked the Larissa Borteh show at Julius Caesar that had a room full of their small, dark, moody, dreamy paintings that struck a chord with me. I also liked the Stevie Hanley show at M. Leblanc, because you can tell that all the work was made by someone that actually enjoys the process.

I’m still getting diminishing returns from the Cy Twombly installation of small white sculptures that seems to be permanently on view in the AIC contemporary wing.

Another experiences that stuck out recently was seeing Midsommar in the theater before I caught wind of any hype. Also watching Sudden Fear, a Joan Crawford thriller that screened at the Music Box’s Noir Fest, in a theater of adults that were all connecting with something so old in the same way likely as when it was released was surprisingly exciting and weird.

Can you talk about your collecting/curating process when incorporating objects in a piece?

Pieces include remnants from previous incarnations of individual items; you will see old skins from 2 X 4s scrunched between two items for example. At some point I was interested in using the sculptures as vitrines to flaunt how little money I was making and how much of it was going into buying the materials to display itself. Other times I’ve made plastic slides that documented all of the pieces in the collection at a given moment. Recently, I’ve been dating the completion of every little piece with a date stamp. I’ll move on from these ideas, but their material will still linger around to be reused for formal or structural purposes. As of now, the common thread of things inducted into the collection is to show mundane artifacts from my life that are bouncing off of more formally-centric wood pieces that are used to physically hold up and display the artifacts. I try to lean the work into a new direction, but it’s still partially rooted in the remains of older pieces.

The abundance of the past takes the edge off of any new inductions. What can you add that will steer the collection in a new direction while knowing you have to deal with all this material from the past?

How do you feel knowing the narrative of the piece will change once you update it?

It’s exciting, and I feel like this is how it should be. Some dorks don’t like the word practice, but I think it makes sense with what I’m doing. There is no conclusion to it, and as it turns out it’s more fun than having finished work. It means I have to bump against the collection continuously and manage it, it’s an ongoing negotiation with stuff and my changing state. But it’s craft-centric, so it’s slower than the presentness of social media.

It’s also a relief. Can you imagine going to grad school and making a giant sculpture that you threw a ton of money into and realize a year later after you return to planet Earth that you aren’t that person that made that giant sculpture anymore? When you make things you’re accountable for them, even if you throw it away it’s still taking up space. I’m not interested in commenting about environmental issues, as this format of working is more about the embedding my economic perspective into the work. Initially working in this way was about conserving space in that it was all collapsible and ready to pack and move.

The idea of having a flexible narrative means you accept that that there are no absolutes and you don’t know what is going to happen in the future. Everything is going to get dated, embarrassing and obsolete sooner or later, so how do you keep it alive and while trying to say something with it?

Your works are ever-evolving, but is there ever a work that has remained unaltered and what do you do when you feel a piece has reached its limit?

There are a couple of tried and true individual guys in the collection that I still have from grad school that I still can’t wrap up in my mind. I can only say that they seem to have some dignity to them where they are perfectly between pretty/serious and ugly/stupid.

I usually just strip the stuff down when it’s time to make assemblages. You know in your heart of hearts that it no longer brings you joy and that it’s time to say goodbye and return to them to the Earth.

With this collection of sculptures, that I keep talking about in this email interview, I would love to find a situation where I defer all power of their arrangements to an audience. It would be collaborative in that I made all the pieces and then hand over the process of installation and arrangement to someone else. They’re all intentionally durable in order to be handled, lean, and stack upon each other. So I would like to play with the idea of giving up 50% of my authorship to an audience in some organized productive way.

I would also want to collaborate with art handlers. In this fantasy a gallery gives me stipend to do a show and I give that money to their team of precariously employed, non-union, MFA-holding, art handlers to install the show in any way they want. The gallerist in this situation is sweating profusely because they actually have to lie at the mercy of these people that have been working for them for years who have interesting thoughts and MFA degrees. Not to say that I’ve been abused or disrespected by anyone I’ve done art handling for, it just seems like a fun idea to draw attention to the MFA-owning art handling community, of which I am an on and off again member.

Can you talk more about the importance of control in your work and your willingness to give up control to the viewer?

I want to stay swinging between the two poles of control and resignation. Tossing it all up in the air and proposing other people have fun with the work is liberating and deflates any self-importance I have. Giving up control surrenders your voice, is de-individualizing, and emphasizes the concept.

But zeroing into an arrangement or individual piece to get into the nitty gritty of it is exciting in a different way. It’s working in a more focused and clear way, trying to continue a historical lineage, or deliberately trying to say something about my experience. Like the project itself I want to stay balancing between one end and the other. 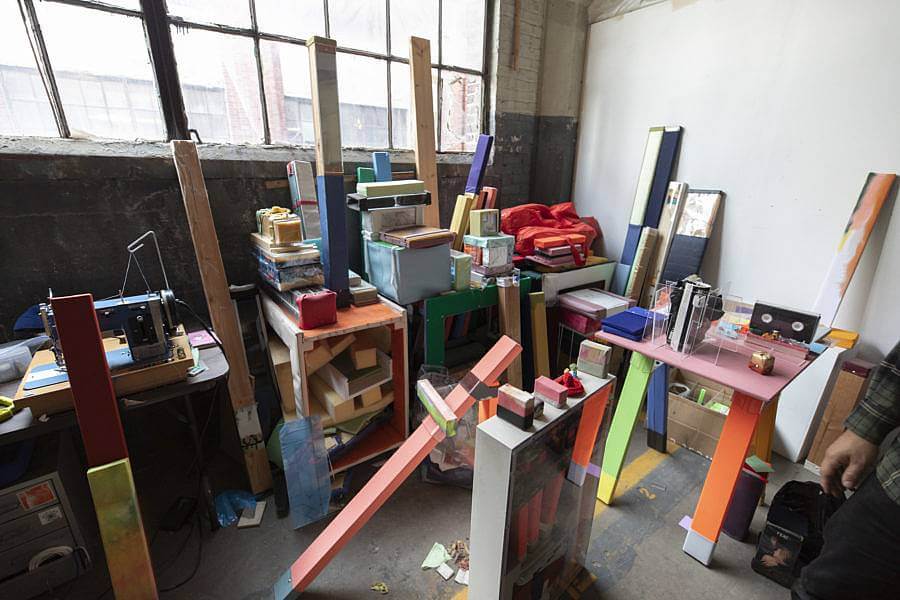 This summer I read A Nation of Outsiders: How the White Middle Class Fell in Love with Rebellion in Postwar America by Grace Elizabeth Hale. I strongly recommend it to everyone as it has changed how I understand all of American culture.

I just read Michael Fried’s breezy profile of Charles Ray in Four Honest Outlaw Artists, which led me to borrow every book about Anthony Caro from the UIC library. Caro is finally clicking for me and it’s exciting to start thinking about sculpture with a capital S.

I’m on the verge of abandoning Better Living Through Criticism by A.O. Scott, and I want to eventually get a collection of short stories by Gordon Lish.

I’m also ducking in and out of the audiobook version of Mr. Know-It-All by John Waters.

Outside of a couple upcoming show later in the year in Chicago, I’ve always been the type of person to isolate myself with whatever I’m working on and dare people to reach out to me after making no attempt to court them or promote myself.

Otherwise, I want to start directing the collection I’m making to be more spatially considered.  I’ve been working on arrangements that are more lean-focused that rely on the wall or architecture, and it now feels exciting to work from the middle of the floor up and think more sculpturally.

Another recent  experiment is with fabric dying which was a long time coming and I enjoy the random prompts that it produces. Instead of playing off the color or print of something store-bought I’m given something wilder to try to fit into what the larger project is.