How did you begin working with the color red in your figures?

After getting back from Skowhegan in Maine, one of the things that struck me most upon my return to Chicago was the ambulance siren. The red pulsing light, that nauseating sound captivated my full attention after living in the country for a bit. I was truly touched and moved at the choreography that took place with cars halting and even pedestrians pausing to look up or give their attention. I wanted that for my figures. I wanted my red figures to have recognition and the viewers’ full attention. I wanted the ability to determine the pace of the gaze; to slow viewers down through red. I wanted to use this loud, vibrant red to choreograph halting. 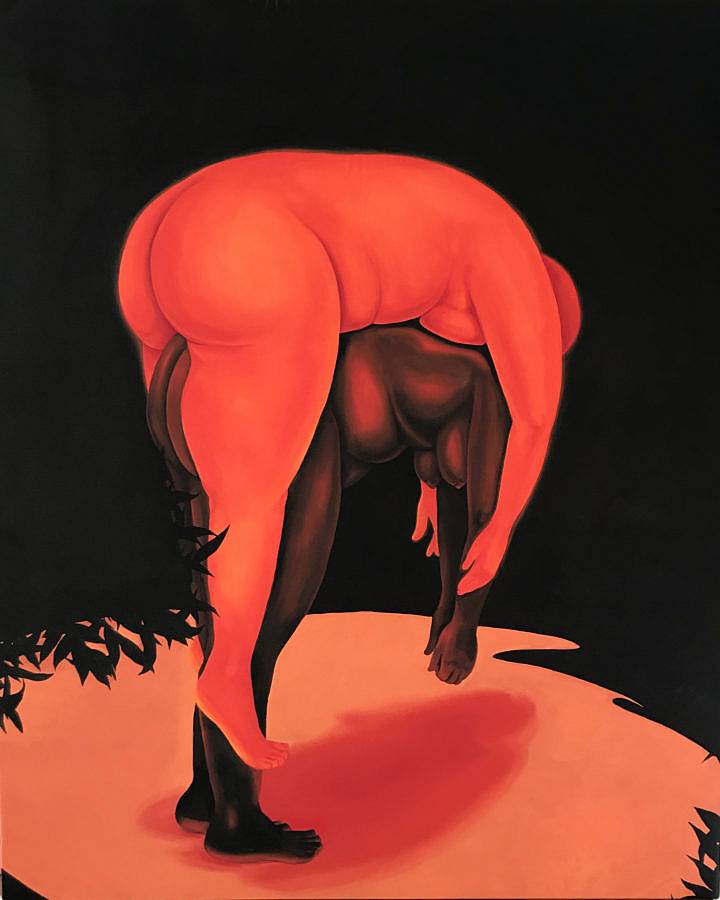 Mommy and Me 2, Oil Paint and Acrylic on Canvas, 55inx67in

Can you talk about the relationship you create between body and landscape?

What is the importance of a California landscape to you?

I grew up in California and during my elementary and high school years moved around quiet a bit. We lived in Altadena and Pasadena with my grandmother, who had an extensive garden. Then right after having access to this lush, gorgeously curated garden we moved to the desert in Victorville California. I think these sites or landscapes became symbolic spaces that highlighted what was taking place internally or emotionally for me. These sites strangely felt like they articulated what my emotional space felt like. The attributes of the desert felt like they aligned with emotional concepts I was wrestling with as do my grandmother’s garden and other sites I pull from.

My studio in Chicago is located in Garfield Park but I’m currently in a residency with the McColl Center in Charlotte NC, so I get to paint in a remodeled church for a few months.

Chicago has been home for me for the past ten years. I think Chicago allows you to live in a larger city without compromising space. When I think about the apartment I’ve lived in for the past five years as well as my studio, I think about how much space is afforded to me despite living in a larger city. In addition to space, I think Chicago has made an impression on my work ethic and my work mentality. LA vibes are a bit laid back, almost as if your brain is as sun kissed as your skin. Don’t get me wrong, I love LA, I just feel as though Chicago has been a city that’s built a work ethic in me. I’ve done a lot of things I haven’t wanted to do, so I can spend time doing what I want to do. But I haven’t done that in isolation. I find that I’ve had to hustle or do this hard grind and while in the thick of it, there’s been a great deal of friends and fellow creatives by my side so I attribute that to a Chicago way of thinking. 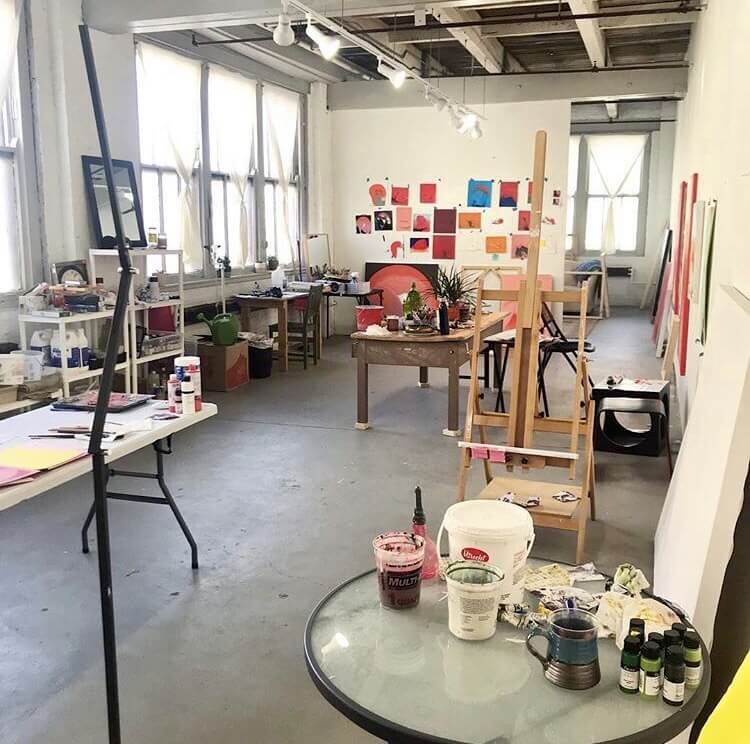 I’m looking at Georgia O Keefe, Laura Aguilar, and Louise Bourgeois. I most recently found a few Raphael drawings that I’ve been obsessing over specifically his “Young Man Carrying Old Man” and an artist friend brought Goya back to my attention.

I just started reading “The Mothers” by Brit Bennett and I am slowly making my way through Hermann Hesse’s “The Glass Bead Game.”

What drew you most to the Book of Ruth as inspiration for your recent work?

I don’t know if I was seeking out that chapter as a reference or inspiration in the work. It was a little more serendipitous than that. I think looking at other artists and painters felt more like an intentional searching. It just so happened that I came across a talk that mentioned Ruth and it got me thinking about the book again. I think I was struck by all these parallels to things I had already been thinking about. Peering into the mother/daughter dynamic was already very present in my work, but then to be reminded that both women were widows, were nomadic or had to release their notions of home and blur the lines of mother/daughter roles caused me to position myself differently towards the book. I think the serendipity of it all made it feel like the book was important; that its resurfacing in my life was meaningful. The book became this hearty material to tease and play with rather than solely sift through my own relationship with my mother. I could watch this relationship with two women who had overlapping experiences with my own unfold in front of me rather than be the subject of loss, moving, or blurred identities around parenting. The book provided me with distance that allowed me to be an observer; and where I was forced to read between the lines I felt qualified to fill the gaps with my experiential knowledge gleaned from my relationship with my own mother.

How has your work or perspective as an artist changed over the years?

I find myself still very emotional and harsh with my work but it has become a motivator rather than a paralyzer. That said, I think I’m more hopeful and excited about things I used to categorize as mundane like making a habit of making a work of art every day.