Morgan Mandalay likes to say that growing he was an athlete, a boy scout, a punk, a thespian, a jokester and a troublemaker, but still couldn’t tell you what it means to be an artist. He uses humor to explore the Sisyphean task of understanding the ways ontology and epistemology are shifting in an era of expanding grey areas. He’s currently pursuing his MFA at the University of California-San Diego and he received his BFA from the School of the Art Institute of Chicago, where he was the recipient of the Edward L. Ryerson Fellowship. He has exhibited both nationally and internationally. Most recently he has had solo exhibitions at Yautepec (Mexico City, MX) and Helmuth Projects (San Diego, CA), and participated in group exhibitions at Alcatraz (Chicago, IL), and Yusto/Giner (Marbella, Spain). He’s currently in a group show at Greenpoint Terminal Gallery in Brooklyn curated by Ryan Travis Christian. He was director of Sunday Project, an alternative exhibition space in Chicago and will be opening SPF15 Exhibitions, project space with a planned obsolescence after 15 shows, on the beach in San Diego this coming winter. 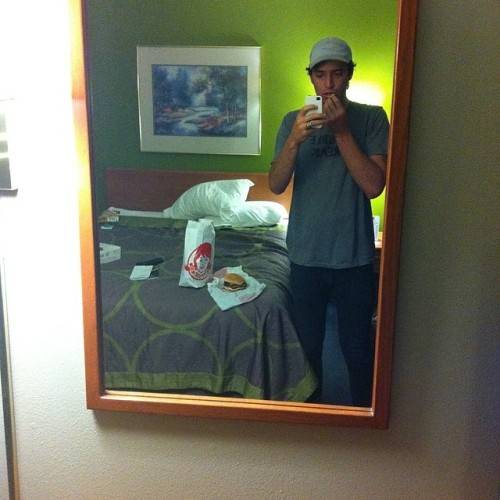 Tell us a little bit about yourself and what you do. I have the potential to be a bit of a windbag. What would you like to know? I was born in Long Beach, CA in the mid ‘80’s. My father is from Cuba but was mostly raised in North Carolina and my mother is the daughter of a cowboy from Oklahoma who mostly raised herself. I attended the San Francisco Art Institute from 2004-2007 where I was studying photography, performance, and installation. I dropped out after three years, planning on taking a year off. As these things go it ended up being five years. In the interim I moved around a bit and kept making and ended up in San Diego where I was a curatorial committee member at Space 4 Art, a non-profit gallery/studio/performance/education space. I returned to school at the School of the Art Institute of Chicago, where I received my BFA this past year. Now I’m back in San Diego working on my MFA at the University of California-San Diego.

I like to believe that my work has plucked bits and pieces from all these different experiences. The work definitely begins from the idea of a studio performance, the product of which is generally a painting, which is then repurposed as a prop for a .jpeg that hopefully encapsulates the entire process. In that way the work has two lives, fluctuating between physical and virtual space.

The paintings act as an excuse to do what I’d like with my time, which would usually be chewed up by labor. So making paintings in a bubble bath, or having a gallery on the beach, or watching Bob Ross in the studio, these things are meant to explore that grey line between labor and leisure with a hope for finding a space outside of that binary. 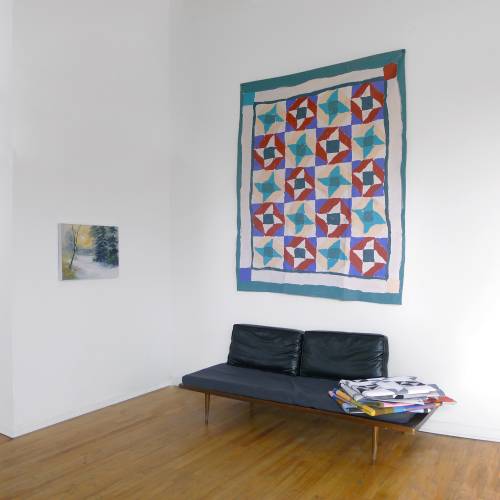 Google acts as the gateway to, what I often refer to as, instant access to forgettable information. Every person, myself included, can now be a weekend painter, mechanic, plumber, etc.

Facebook is a succubus; it seduces me with hope of something interesting and leaves me with a thousand “the 10 most…” articles jamming up my hard drive. But it’s also always looming. The Friendship Quilts started from a hope to reexamine the hopefulness I once had for social media. They’re collaborations to a degree, visual representations of interactions over Facebook Messenger. The quilt pattern acts as a game board that gets filled in through a kind of crowd sourcing.

Even though I check my email a bagillion times a day I still somehow have over 7,000 unread emails. Not expecting that to change any time soon. 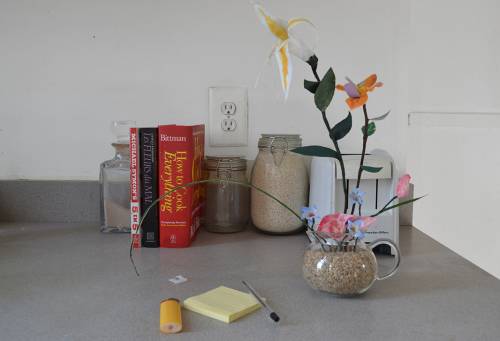 How has living in San Diego affected your art practice? That’s a somewhat hard thing to suss out. I mean, I just moved back here about two months ago, but San Diego is just so much a part of who I am from spending about two thirds of my life here. I’d say there’s definitely something about being here that’s always made me feel torn between chill vibes and then there’s also this desire to rebel against that and just work really really hard. I’m basically trying to be really ambitious about chillaxin’.

What are some recent, upcoming or current projects you are working on? I’m currently working on this project called A painting could generally be described as a rectangular surface with marks of paint applied to form a nice composition from a pleasing subject matter. Simultaneously I’ve been expanding on the The Joy of Painting project. I see these two projects pretty similarly, even though the resulting images are wildly different. Both are attempts at trying to make a representation of a painting. So basically as opposed to making a representational painting of a bed, to use Plato’s example, what would it look like to make a representation of the thing we use to mimetically encapsulate the world.
As far as upcoming endeavors, I’m working on a sort-of continuation of the space I was running out of my living room in Chicago called Sunday Project. I’ll be opening up a space here in San Diego on the beach in a 10×10’ pop up tent called SPF15 Exhibitions, or Sunday Project for 15 Exhibitions. I’m pretty excited for the artists we have lined up and for the curatorial challenges that lie ahead. 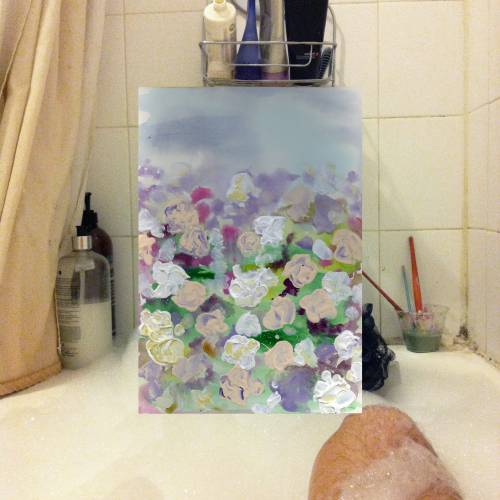 If you were a drink what drink would you be? Jeeze, I would like to believe I’m a Budweiser but I’m concerned I might actually be a Long Island Iced Tea. Maybe I’m just that rag that the barkeep uses to clean up all the spilt drinks.

What artists are you interested in right now? Prepare for an eclectic mix. I just saw a really great show of my buddy J Noland’s work at Helmuth Projects here in San Diego. I’ve been really digging on Chloe Seibert’s work for her sense of humor and a strange kind of je ne sais quoi. Lauren Taylor, who has also just been a great person to bounce my neurosis off of, makes amazing drawings, installations, and PDFs that have this angst and low hum about them. Ummm Andrew Birk CRACKS ME UP PRETTY MUCH DAILY. When you get him going about painting you realize that, despite his sometimes cynical social media presence, his love is a sincere one. Trevor Amery and I have been having these really great conversations that have been challenging me lately.
I have an “always and forever” kind of love with Goya. Also, André Cadere as a sort of OG troll but his work had this strength and danger. His Barres existed as both physical objects but also as performance prop. Also, Joseph Kosuth, probably the first person to really turn me on to thinking about representation as a conglomeration rather than a truth achievable through a single mode of making. 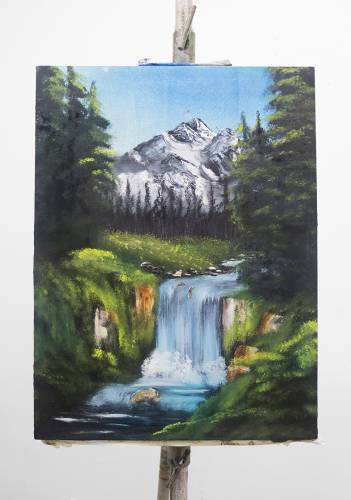 Tell us about your work process and how it develops. There’s a bit of a “what came first the chicken or the egg” thing to it. So in general there’s an act of performance in the making process. So I’m trying to fully embody the making of X and hopefully then these representational objects/paintings/ephemera also begin to embody the thing-ness of whatever the thing is they represent. So when I’m making The Joy of Painting, the process starts from going to Michael’s and buying a store bought 18×24 inch canvas (this is the size Bob Ross recommends) and all of my other materials. And then I faithfully attempt to paint along with the show. So in this way there are only minimal variable shifts in the work between the thing being represented and the final object. The final step then is the documentation, which can act as both a red herring and as an entranceway into the process and meaning of the work, as is the case with the Tub Paintings project, where each image is laid atop an instagram photo of my legs in the bubble bath. 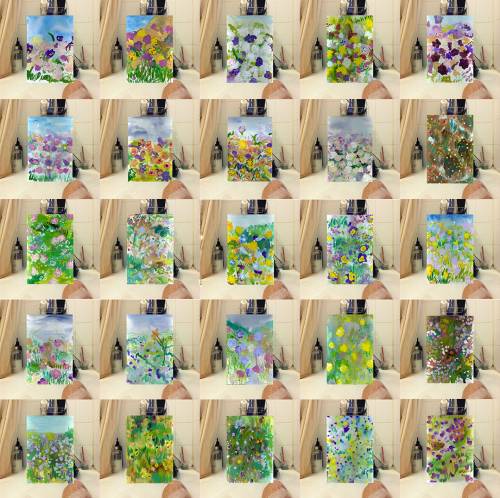 What’s your absolute favorite place in the city/the world to be? There’s this small hole in the wall bar in San Diego called the SRO Lounge that I probably over think but I freakin’ love it. It’s history is as a bar for trans women, but over the years, due mainly to the fact that this country music bar opened up the street without a liquor license, it’s become this amazing queer space where communities you would never see interacting, coexist, intermingle, and generally have a great time due to what used to be forced cohabitation and has evolved into mutual, I don’t know…enjoyment.

Doesn’t hurt that the bar serves some of the stiffest drinks I have ever been served. We’re talking like four-ounce shots as opposed to the usual one point five…for the same price. The interior is red with these dusty Rococo prints and sculptures and they always have beautiful giant flower bouquets throughout the bar, free popcorn, and a pool table to boot. 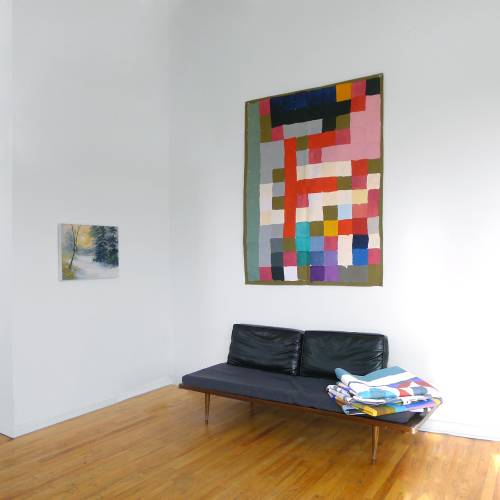 Can you share one of the best or worst reactions you have gotten as a result of your work?
Me: I’m so glad you made it to the crit, I wish you had said something though.

Advisor: Thing’s seemed to be going really well, I didn’t want to spoil it. If I had said anything it would’ve been, “What the fuck is all this shit?”

Also Keith Boadwee likes to tell people I’m one of the only artists to climb out of his shit list when he introduces me and that makes me pretty happy.

What are you reading right now? I just finished up Ben Davis’s 9.5 Theses on Art and Class, which I thought was great. Super readable and hits on a lot of good interesting points. I accidently stole this book from Andrew Green (sorry, I’ll get it back soon. Also Andrew is a really brilliant artist who should’ve been included in that list of artists I’m interested in) called Contingency, Hegemony, Universality, a collaborative book by Judith Butler, Ernesto Laclau, and Slavoj Žižek…probably way to heady for me. So far it’s pretty good though. Also, for more of a dessert book I’m reading Kafka on the Shores by Haruki Murakami, highly recommend. I just got a shipment that’s unopened from Amazon.