Tim Brown is a sculptor, writer, and photographer currently in transit between Los Angeles and Kansas City. He has most recently shown at Roots & Culture in Chicago, Steve Turner Contemporary in Los Angeles, and the Santa Barbara Contemporary Arts Forum in Santa Barbara, California. As a member of the 9 person collective Okay Mountain, he has most recently shown at Mark Moore Gallery in Culver City, California. 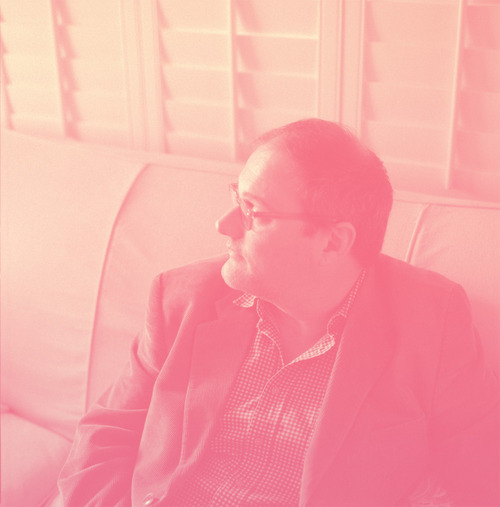 Tell us a little bit about yourself and what you do. I grew up in Tulsa, Oklahoma, and have bounced around a lot. I did Google Street View snapshots on my blog of every place I’ve lived, so that’ll fill you in a little bit. I have been bumming around Los Angeles for a year since I finished my MFA at the University of California, Santa Barbara, and am preparing for a move to Kansas City. I do some carpentry and write for the magazine This Land Press. I belong to Okay Mountain, an Austin-based art collective. I am pretty mellow, but I can be an angry driver. I love our little cat Maybelline and whistle her theme song every chance I get.

Top 3 favorite or most visited websites and why? Google Alerts sends me links every day for about a dozen search terms: “peyote” has been sending me down the rabbit hole lately. Also “floatation tanks” has been trending very heavily recently.

I love Nardwuar the Human Serviette! I go through his video vault and take down all of the band names that he drops during his interviews.

God, I watch a lot of Netflix—I like creating groups of screenshots focusing on the sets from movies like “Escape from L.A.” and “Phantasm”.I have also been going through The Larry Sanders Show episodes and getting screenshots of the talk show set without people in it. Love that set. 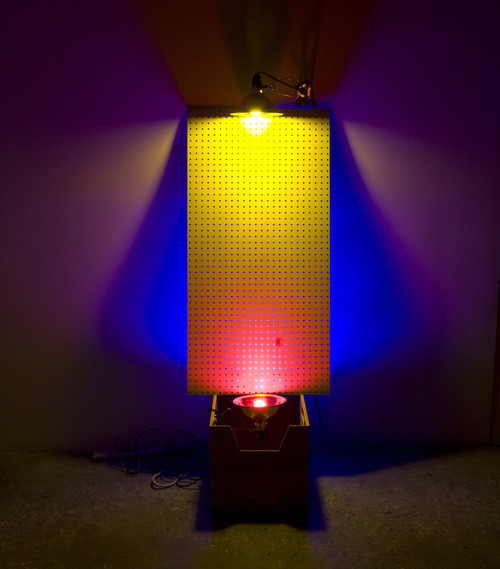 What kinds of things are influencing your work right now? Lack of Space. I can’t make sculptures because I lost my studio in a drug bust, so I think about how to make sculpture “kits” that I can use for sculptural installations. The recent run at Roots & Culture is an example of this portable mode.

The combination of no space and “peyote” Google Alerts has made me start designing some work for peyote beadwork like that of the Huichol Indians. There is cool software that allows you to do it with a palette of the bead colors that are commercially available.

There’s a great Brian Eno interview from BBC 4 that has not been an influence as much as it has been an affirmation of some ideas that I have been working with. My sculptures are really about a collection of simple elements combining in complex ways. Both Eno’s and Terry Riley’s music work in the same way. Also Ash Ra Tempel’s Inventions for Electric Guitar is something I play on repeat in my imaginary studio. I am working on ways to combine my visual sense with these types of subtle musical compositions. 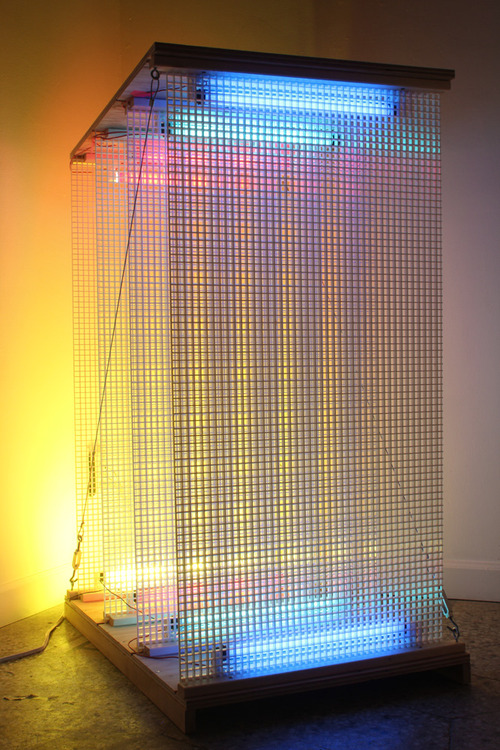 What are some recent, upcoming or current projects you are working on? I just ended a run at Roots & Culture in Chicago with an exhibition called “Dark Star” with my friend Rimas Simaitis. We wanted to make a somewhat portable show that we could build on site, and we did just that in the week before the opening.  It was really fun, and I love those folks—Eric fed us crazy bánh mìsandwiches all week.

I don’t have a name for it, but for the last year and a half, I’ve been returning all the letters I’ve ever received.  Being an older gentleman, this has turned out to be a lot of stuff. So far I’ve sent out over 1000 pages of ephemera to friends, family, and exes. The exes part has been a mixed bag, definitely.

There is a guy in Kansas City named Tim Brown who has a gallery named Telephonebooth. I’ve never talked to him, but I’d like to do something with him just for the sheer confusion of it. 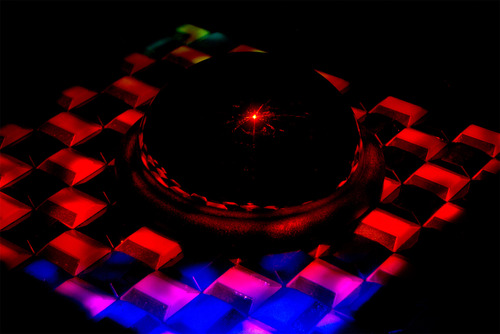 What artists are you interested in right now? There are kind of two categories, the ones I’d like to show with, and the ones that I probably couldn’t because they’re too famous or too dead.

Some other artists doing rad stuff are Hoonida Kim from Seoul, South Korea, and Laura Hughes in Portland. I don’t know either of them, but I’ve found their stuff and I like it. I have recently stumbled across the Kunsthalle Detroit Museum of Light and Multimedia Art  and I love what they are doing.

I’m obsessed with James Terrell’s retrospective at LACMA, which is just down the street from me. This is shaping up to be the Year of Terrell. After you experience his Ganzfeld room, everything else just seems cheap and arbitrary.

I collect images of Vera Neumann’s geometric scarf designs. I really love her sense of color. Her best work is like loose OP art. 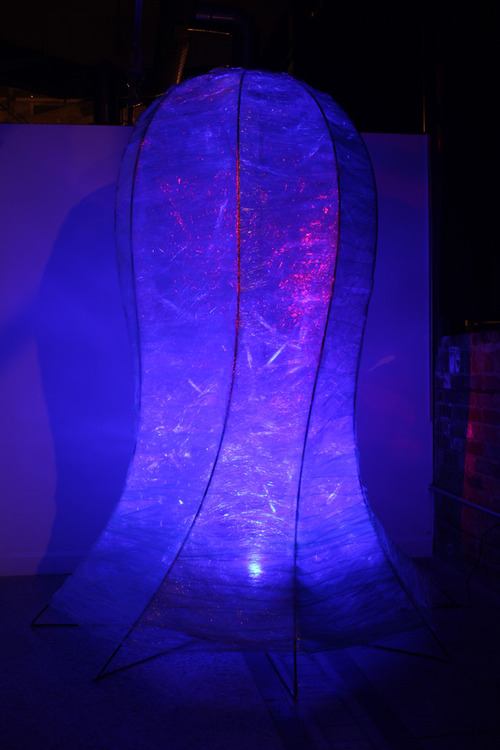 Tell us about your work process and how it develops? I approach creating in different ways, depending on what I’m doing. My photos are about being in nature and looking for something that is a feeling rather than a thought. My sculpture is about taking simple things and arranging them in ways that make them complex. My writing is about remembering the past and pulling it from the clutches of forgetting.

What do you want a viewer to walk away with after seeing your work? I kind of like to see them stumble away from my work, shading their eyes from bright lights of the rest of the world. 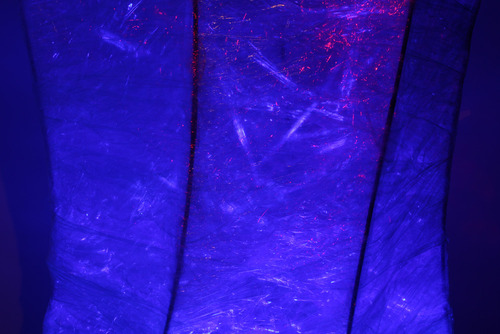 What’s your absolute favorite place in the city/the world to be? Coal Oil Point, California. It is a magical/ trajical place.

What are you reading right now? My friend has been recording himself reading Infinite Jest, so I’ve been listening to that. He does it a chapter at a time, and doesn’t edit his recordings too much, so I can hear him smoking and drinking coffee while he reads it. It’s great because he lives in another city and it makes me feel closer to him. I’m thinking about recording On The Road or Finnegan’s Wake for him. 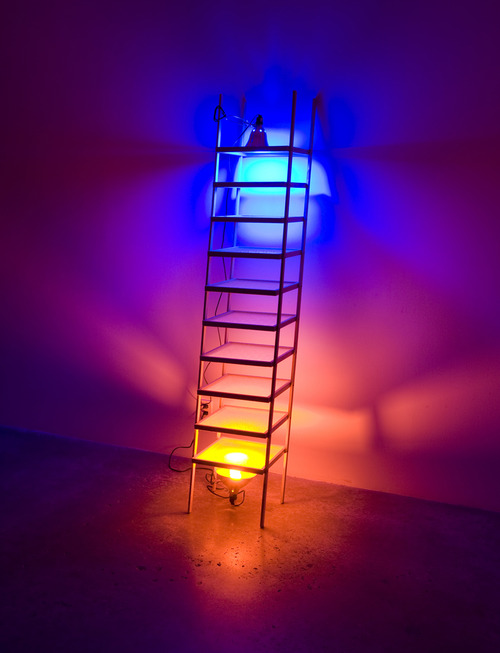 What were you like in high school? I was a wannabe soccer jock who couldn’t make varsity, so I turned into a pot-smoking, guitar-playing art freak.