Pictureplane is an electronic musician, artist, and clothing designer. Originally from Denver, Colorado, he currently resides in Brooklyn, NY. 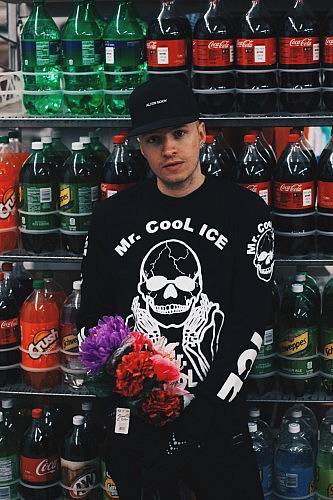 Tell us a little bit about yourself and what you do. I’m an artist living in Brooklyn. I create things.

How has living in Brooklyn affected your music? I moved to Brooklyn in 2012 from Denver, Colorado, which is obviously a very different place from Brooklyn. I had always wanted to live in New York all my life. As a kid I was obsessed with rap music from New York and I would have fantasies of wearing huge camo jackets and Timberlands, sitting on some stairs drinking 40z or something, haha! New York has been so inspiring to me and always will be I think… There really is an energy to the city that just pulses and radiates throughout the streets. I love feeding on that. The history of New York is just so fascinating to me. Going back hundreds of years, NYC has been a place of adventure and beauty, chaos and magic, dreams and desperation. I love the contrasts. So much culture is born in New York and then exported out to the world. I enjoy being a part of that here. The energy and vibe of New York has seeped into my music and art over the past 3 years here, most definitely.

What kinds of things are influencing your music right now? My new album coming out in September is really inspired by industrial music from the 80’s and 90’s, dark wave and minimal synth music, and hip-hop. I liked the idea of combining all of those genres together to create something new. The music is all about our current relationship to technology and how it is changing us and our culture. There is a push and pull relationship with humans and technology, and it’s sort of become unclear which is in control of the other. The album is called TECHNOMANCER. That word means someone that has a magical control over certain technologies, or uses technology for magical purposes. I wanted to make a record dealing with these themes.

What are some recent, upcoming or current projects you are working on? I have been working really hard on my clothing line, ALIEN BODY, designing shirts and jackets and hats and all kinds of stuff. It is really fun and rewarding to be able to mass produce my art into society like that. When I do gallery shows, people can only see and experience the work in that small setting, but with clothing, it is this really cool medium to bring my art and ideas to a much large audience. I have a solo art show in Denver in June that I am working really hard on right now, and I’m starting to plan some tours to support my record later this fall. 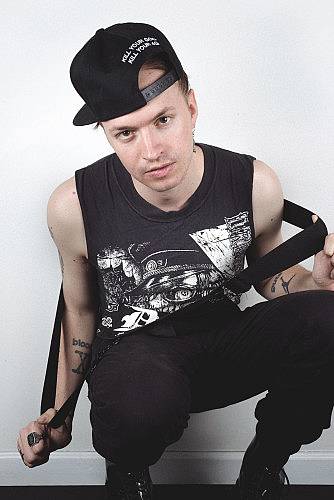 If you were a drink, what drink would you be? Some sort of delicious ale beer that tastes like flowers, brewed by a monk inside of a castle in Belgium.

How did your interest in music begin? I have a vivid memory of becoming sexually aroused as a child listening to Let’s Talk About Sex by Salt-N-Pepa.

What other musicians/bands are you interested in right now? I’ve been really feeling this band Prayers from San Diego. I just got to go to their show in LA and they really blew me away. We became good friends after the show and I hung out with them for three days. They just bought a cop car to light on fire for their new music video. I’m excited about Skull Katalog, Antwon, Show Me the Body, HEALTH, Cities Aviv, Flatbush Zombies, Youth Code, Lust for Youth, Awful Records, Slug Christ, Dawn of Humans, Juiceboxxx, ILoveMakonnen, Noah 23, Mr. Kitty, Bones, Denzel Curry… So much great music right now really. The underground is strong.

What do you want a viewer to walk away with after hearing your music? I want my music and art to uplift humanity and for it to empower people. It’s a big reason of why I do what I do. I want to help us get our power back and to help heal the world. There is a shamanic element to my art that I am still figuring out.

What’s your absolute favorite place in the city/the world to be? I have really enjoyed Japan, Russia, Mexico, New Zealand, Norway, the Czech Republic. One of my special places to be is maybe Kutna Hora in the Czech Republic. My spiritual homeland is the American Southwest.

What were you like in high school? I was obsessed with underground hip-hop, and I was a rapper when I was a teenager. I would seriously battle rap kids while rapping about pyramids and aliens and shit. I loved everyone and wanted to bridge the gaps in high school between the hip-hop kids and the emo kids. I was somewhere in the middle.

Can you share one of the best or worst reactions you have gotten as a result of your music? One of the most amazing compliments I ever received was in Kazan, Russia. A girl named Zebra (shout out to Zebra!) told me that I was helping Russians to “remember the Russian soul.” Lots of people tell me I am inspiring them to be more creative and free, or that I help them feel better about themselves. I’ve had trans people and gay people tell me I have helped them come to terms with their true selves, which is crazy to me. It’s beautiful. One of the more worse reactions was in Korea; this guy literally wanted to fight me at my show. My set made him super angry for some reason. He came up to me just talking shit right away after my set, telling me I was bullshit and that it wasn’t “real music” and getting in my face. It was crazy. I also remember opening up for Major Lazer in Boston at the House of Blues. I was playing in front of like 3,000 people and there was this guy right in the front row who just had his two hands up with his thumbs down the whole show, just staring at me while I performed! I couldn’t believe it. It fucked me up.