Ioannis Sochorakis is a production designer with an architectural background, who earned his Master of Design for Stage and Film at Tisch School of the Arts in New York City. He started working on sets with the “George Tsypin Opera Factory“,  for international major operas such as the Metropolitan Opera, The Netherlands Opera, The Lyric Opera of Chicago and the Olympics Opening Ceremony in Sochi. With Christine Jones, he worked on Rigoletto for the Metropolitan Opera and their latest collaboration is the interactive show “Queen of the Night” by the “Sleep No More” producers, in Paramount’s Diamond Horse Shoe. He worked in the Art Department on Alejandro G. Iñarritu’s latest film “Birdman”, Tom McCarthy’s “The Cobbler” and on further major american television network and independent productions. For Palace Living he got awarded for Best Production Design in Tribeca’s Visionfest 2013. Additionally he has directed shorts, M-TV spots, and music videos. 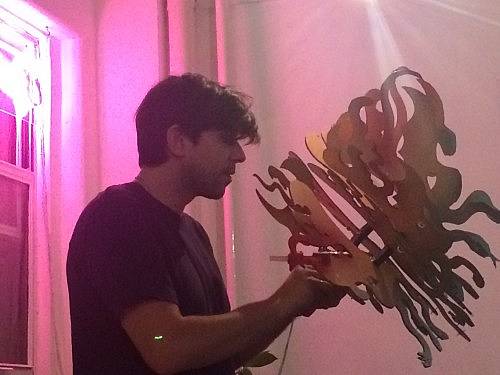 What are some recent, upcoming or current projects you are working on? Being part of the Art department on Iñarritu’s latest film “Birdman (or the unexpected Virtue of Innocence)” is unforgettable. Kevin Thompson (Production Designer) and Steve Carter (Art Director) were not just tackling the problems that rise in such a complex shoot; they were coming up with amazingly creative solutions fastest than I have ever encountered a team do before. It was a tremendously valuable experience for me to assist such masters. The film among so many awards and nominations since its opening, already holds two golden Globes, an ADG award on excellence in Production Design and it will be seen at the Oscars under 9 categories! Currently, I am developing a video work series with laser surgery robots in Switzerland together with 2014 Pionierspreis company, “AOT“, and am very excited about visiting the Berlinale for the first time where “Out of My Hand“, a film I designed this summer, participates. Future plans include talks on more film making in NY and maybe Europe!

What is one of the bigger challenges you and/or other designers are struggling with these days and how do you see it developing? I once had a conversation with professor of mine about the difference between a designer and an artist; the thin line between service and expression. While walking that line, it is easy to pull excuses like budgets, professionalism, formulas and be frustrated about a client, a producer or a director. When one does film or theater, it is all about the team. A chain is only as strong as its weakest link. A big challenge for me is to keep the balance of being valuable to the machine without becoming a cog.

How did your interest in art or design begin? I remember watching films in this small national Greek channel ERT3. Late hours, low ratings, uninterrupted masterpieces. It was the first time I got to watch Fellini, Antonioni, Godard, Pasolini, Tarkovsky, Truffaut, Bergman, Buñuel. As like most kids, Spielberg and Lucas were blowing my mind, but it was films like “Satyricon” that made me realize the power of performance in space.

How has living in NY affected your practice? Cities exist before we come and after we go, and in those small segments of our stay, we grow together. This city asks you to reinvent yourself working throughout a huge variety of projects, starting from designing and building installations for raves to working on big Hollywood studio films. I feel confident knowing in which neighborhood to reach for my tools, and for my team. And then at times I like trying something I have never tried before, something that I don’t know how to do, but I am certain that the city offers the resources to achieve everything.

What materials do you use in your work and what is your process like? It depends on the nature of the project. Sometimes I am 3D modeling and drafting on the computer, or I am in basements looking for the proper scale model pieces, or I find myself jumping into junkyards, visiting prop houses, and online platforms for the magic object. But no matter how fast and far you can get online, I always enjoy finding myself in unexpected places and meeting perfect strangers.

Tell us a joke.
A guy walks up to Machete
Guy: Hey Machete! Do you know Chuck Norris?
Machete: Who is she?

What artists or designers are you interested in right now? I am revisiting and expanding my experience on Peter Greenaway these days. Love his work and would love to work on a film of his one day.

What was the last show you saw that stuck out to you? I truly enjoyed watching ‘Kein Applaus Fur Scheisse” (“No Applause for Shit”) with Florentina Holzinger and Vincent Riebeek. I saw them in Zurich last week and I truly recommend their show. It felt that my laws of aesthetic were alarming but I had forgotten to get shocked…unique.

What are you really excited about right now? Reuniting with my woman after three months of impure Skyping.

What are you listening to right now? In a film by Nikolaidis “Sweet Bunch”, one of the gang members, Argyris, explains before he is surrounded by police and shot to death, how in life we should keep satisfied three things in order to reach balance. The mind, the stomach and the sex. I find my self this month listening too often to the Interstellar Soundtrack by Hans Zimmer (mind), Major Lazer’s “Guns Do Not Kill People” (stomach), and INXS’ “Kick” (sex).