I have a lot going on these days. But mainly I am wrapping up my debut solo LP (out on Catch Wave LTD. this winter), and composing two chamber works to be premiered this fall. One is a piece for amplified cello and six amplified double basses (very loud!), and the other is a string quartet with a light installation. I am working with Berlin-based artist Doron Sadja on the installation, which has been a fascinating process. I hope to develop more work involving lights in the future. 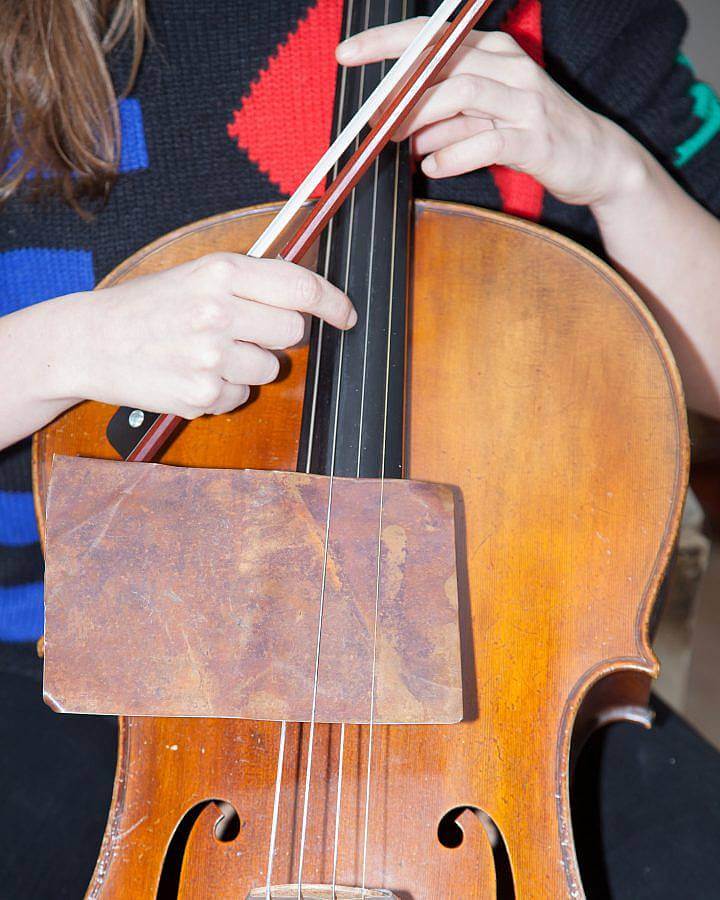 How has living in Brooklyn affected your work?

Before moving to New York in 2012, I had always lived in rural areas where I would compose in silence. My first Brooklyn apartment was on Broadway, where there is a famously loud above-ground train. All of the sudden I found myself drowned in urban noise pollution every time I would open my ears and mind to compose. My only way of bypassing the “pollution” was to embrace it and integrate it into my work. I was already very interested in noise (mostly Japanoise and Musique Concrete at the time), so it was a very organic and pleasurable musical transition and revelation. I always practice deep listening while composing, and there are so many overlapping textures in this urban environment . . . I welcome these sounds as musical elements that nourish my compositions. To that extent I guess I will always be strongly influenced by whatever soundscape I live in. 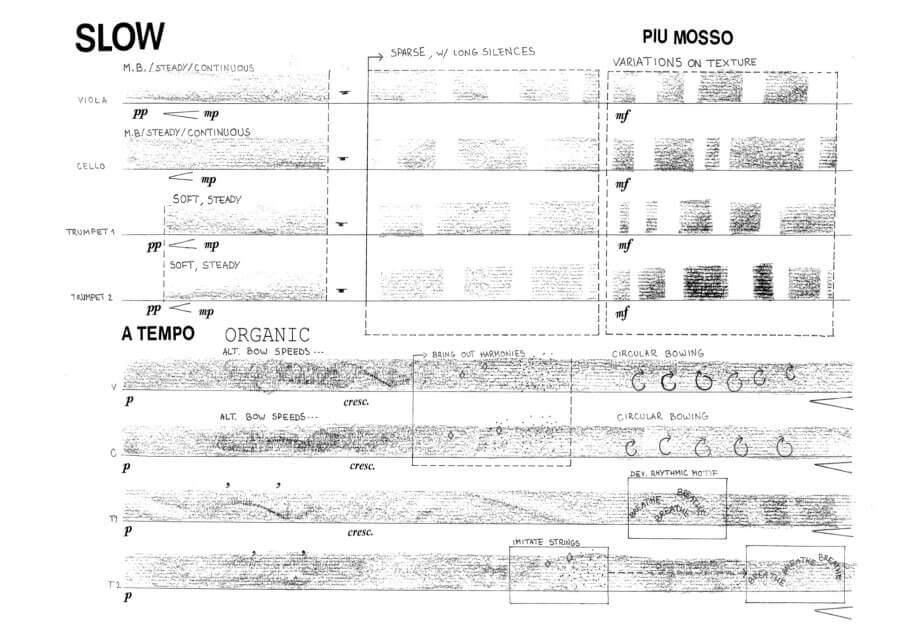 In all honesty, they aren’t that different. I always leave room for improvisation in my compositions, because I think there is an energy in improvisation that is not replicable in notated music. That being said, improvised elements in my compositions remain extremely restrictive with very precise parameters. But even the smallest opportunity for a player to make their own choices forges more focus, intention and musicality.

How do you investigate texture through your performances?

It all starts with the sonic possibilities of my cello. My cello is pretty cheap and doesn’t sound very good by normal standards. But there is an infinite amount of textures I can pull out of it, so I choose to focus on that. I also use a lot of cheap equipment, mostly different amps and microphones, which are loaded with buzzes and glitches and distortions, and I try to create a musical vocabulary based on that. Using cheap and broken equipment is not a choice, but that’s all I have, so to some extent a lot of my music is finding creative solutions to mask my lack of equipment. I think there is something precious and beautiful about treating equipment as sort of living, imperfect creatures. I am conceptually drawn to a lot of visual art from the same vein, from Arte Povera to Wong Kar Wai’s wild, unscripted films in which beauty stems from necessary improvisation due to disorganized and spontaneous productions. 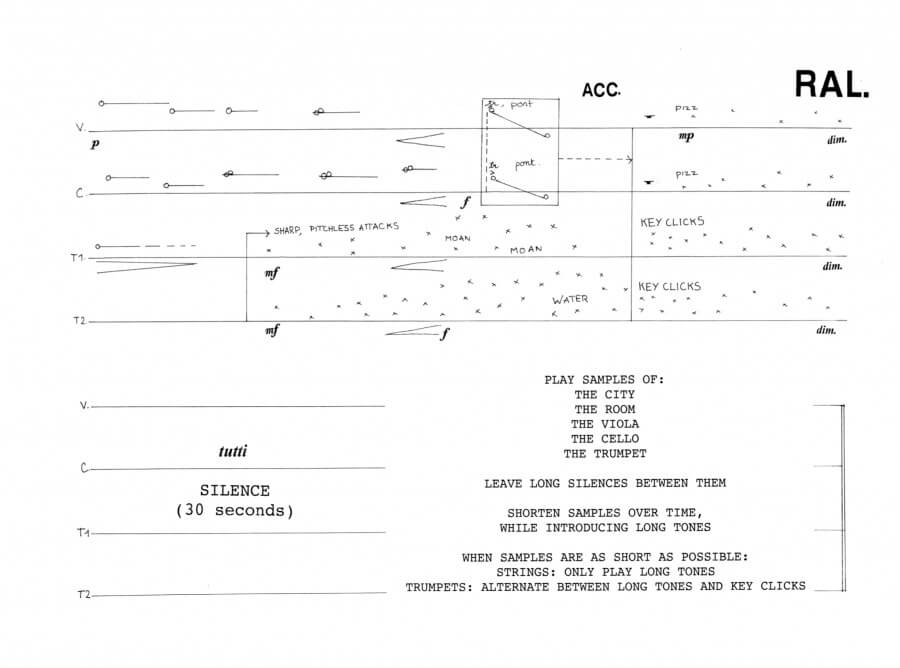 I think the most fruitful possible collaboration would have been with Pauline Oliveros. I believe her practice and philosophy is actually the silent motor behind all contemporary experimental music.

Can you tell us about your writing process?

I practice a lot of deep listening, and sort of single out existing sonic elements that trigger an emotion in me. I then write a lot of text–ideas, concepts, descriptions of sonic experiences. . . and I “transpose” those mental atmospheres into musical elements. I map out the piece in text with some graphic elements, and I then “translate” them into musical notation (may it be traditional or graphic). Although concepts are often the driving force behind my musical process, I do not consider my music or end product to be conceptual at all and don’t expect the listener to relate to it on that level.

Next trip is to Los Angeles in June, where I’ll be playing an improv duo with Kim Gordon at LAXART. 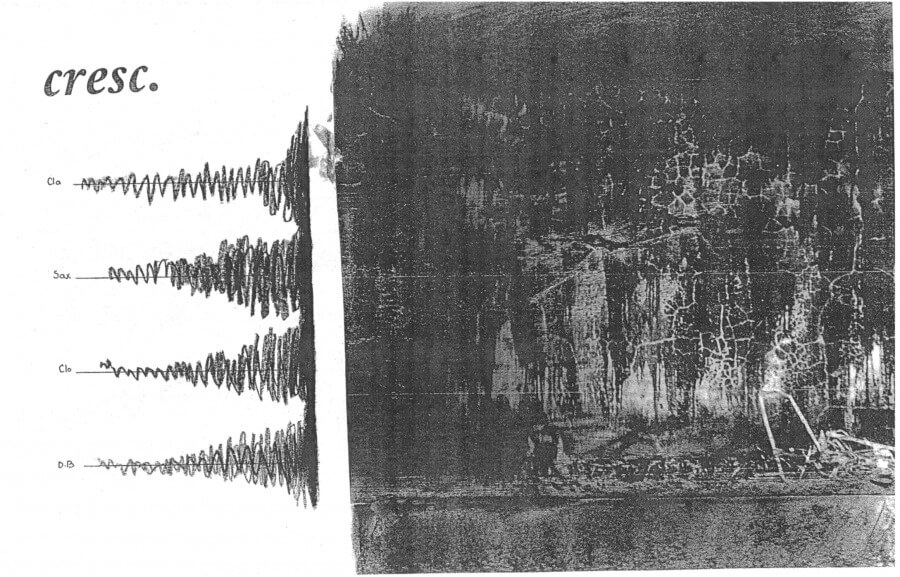