Tell us a little bit about yourself and what you do.  I am a painter, drawer and installation based artist living and working in Chicago. I moved here from Colorado in 2007.

What are some recent, upcoming or current projects you are working on?  I currently have work on display at 4th Ward Project Space in Hyde Park 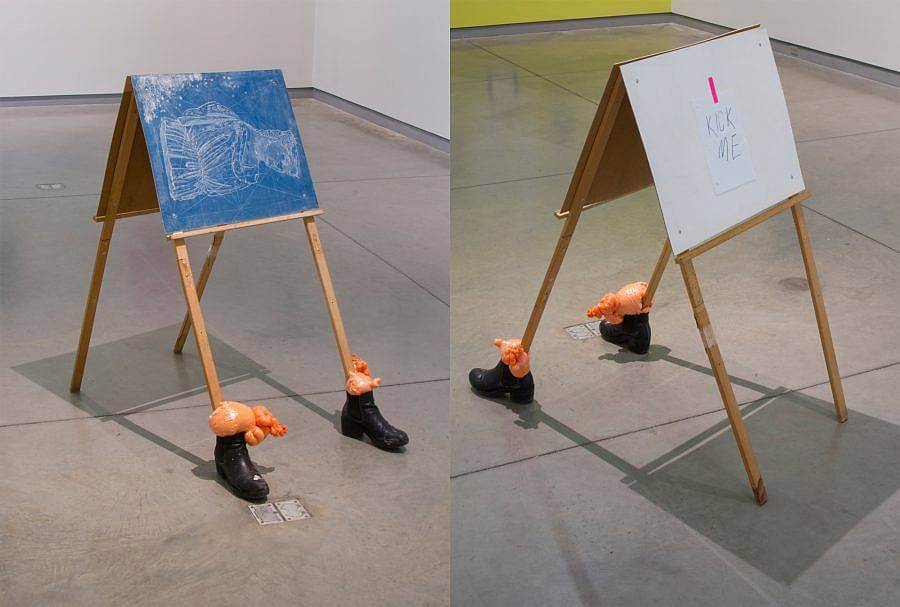 What materials do you use and what is your process like?  The materials I use are extremely important and often symbolic: blackberries, chalk, fire, ashes, moss, metalpoint, high-polymer film lead, space-blankets, bone and saliva are juxtaposed with more “traditional” painting mediums like acrylic, casein, gouache and oil paint (usually all on panel).

I am a research-based artist. I tend to exhaust a topic briefly, and then I try to forget the details, allowing the essence of the subject to get internalized…so that later when I am working on a piece, almost like a dream (if one believes in the theory that dreams are a way of the thinking mind to sort through one’s daily thought, experiences, feelings, and anxieties), my subconscious will reconfigure my research and spit out decisions for the work…it’s a sort of lateral thinking or fuzzy logic. Other times when working on something, if I am stuck, I’ll literally tape a collaged element (either image, text, post-it note or sculptural object) onto the surface of a painting just to see what it looks like. I’ll leave the collaged element overnight and if the next day I find myself unhappy with the work without the collage, that’s an indication that I’ve probably made a good decision. I’ve started naming this process: “what’s the stupidest thing I could do with this right now?”

How did your interest in painting and drawing begin?  I am about to write the thing I tell my students never to write in their artist statements: I’ve always been drawing. I was sick a lot as a child and drawing and reading were a reliable refuge during long periods of unstructured time.

As a child the adults in my life mistook my curiosity in the world and questioning of the nature of things for the mind of a scientist. I was encouraged to study science and for two years of my Undergraduate degree I was on a pre-med track. I’d take fifteen credit-hours of science classes and three credit-hours of studio art each semester…and then proceed to spend all of my time in the painting studios. Additionally, the only way I could memorize anatomy and chemistry was through producing thousands of drawings of bones and nervous systems and circulatory systems. After two years of barely passing my science classes, I realized that I was doing everything backwards. 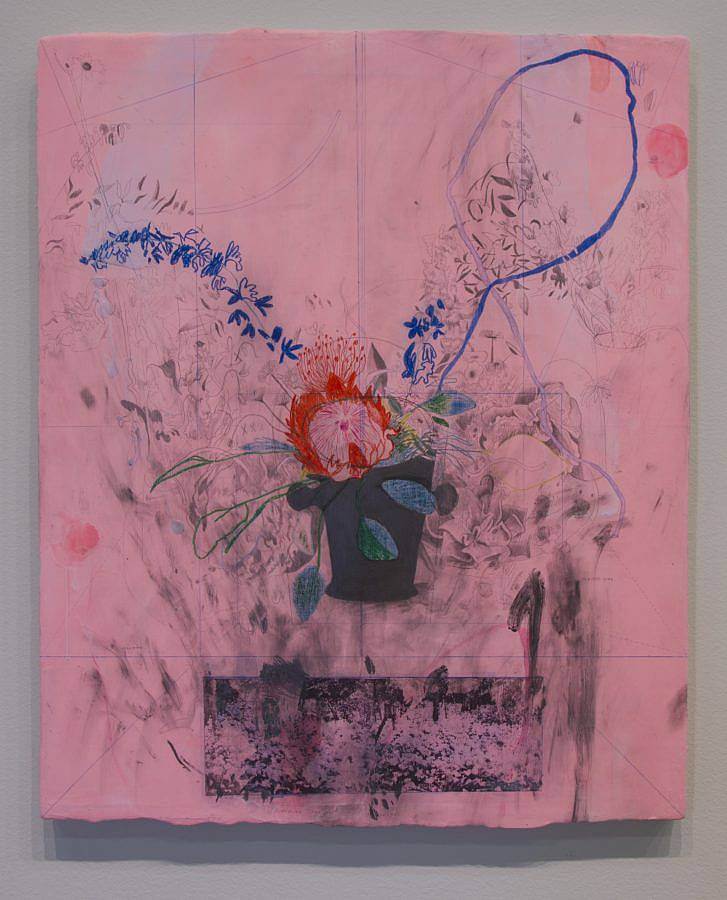 What is the most exciting thing about collage?  I like to use collage as a tool to make references to ideas outside of the picture plane. “Untitled (take care of yourself)” from 2016 is a good example of when a collaged element can stand up better than a drawing and/or image of an object would….one day upon arriving at my studio I found Scientology pamphlets jammed into our mailbox. The covers of the pamphlets were titled “The Way to Happiness.” I loved the weird series of coincidences: here are these pamphlets meant to inform (and possibly even convert) the ‘uninformed’ about the wonders of Scientology crammed into the mailbox at my studio (the safe place I go to to draw and make work). I had planned on drawing images of the pamphlets on a panel, but then realized that just adhering an actual pamphlet to the surface of a panel would be enough.

What is currently inspiring your practice and imagery?  Most recently, I’ve been interested in genres/tropes within painting and drawing…for example: this summer my friend Sean Ward hosted an Ikebana seminar for a small group of Chicago-based artists. After arranging the flowers, we were asked to make drawings of our arrangements. I really enjoyed the process and started thinking a lot about Dutch flower paintings and the coded language within the symbolic references in the flower and palette choices. I started to wonder what sort of Dutch flower painting I would make and the painting “idiot professor learn ikebana” was the result.

I’ve been looking a lot at ambiguous moments in art, science, and mythology where symbolic meaning and/or interpreting what is being seen/depicted requires a certain amount of trust/faith in systems of meaning. I’m especially interested in instances where conflicting meanings are equally viable conclusions.

OR I can literally list the imagery in my studio right now: photocopies of X-rays of my severely impacted wisdom teeth, color charts, images of: Athena, Diana, Nefertiti, Atlas, Janus, Manet’s asparagus, Hans Haacke’s Manet’s PROJEKT ‘74, Kazimir Malevich’s Monochromes, vessels from The Art Institute’s collection, David Hockney’s “Useful Knowledge (After Kirby), Adrienne Rich’s poem “Implosions,” postcards and posters from friends’ exhibitions, cyanotypes of “Why haven’t we seen a photograph of the whole Earth yet?” pins, various Chick tracts, images of catacombs (there’s a lot of skulls in here right now for some reason), fluorescent post-it notes, thrift store vessels arranged as towers, images of various album recordings of the opera “Tristan and Isolde,” diagrams of anechoic chambers, images of ouroborus, a plastic surgery poster, postcards from the Kerry James Marshall exhibition, Bruce Conner’s retrospective, and the Paul McCarthy drawing show, Rebecca Morris’ “Manifesto for Abstractionists and friends of the non-objective”,  and a postcard from the David Bowie exhibition with lyrics to “Ziggy Stardust.” 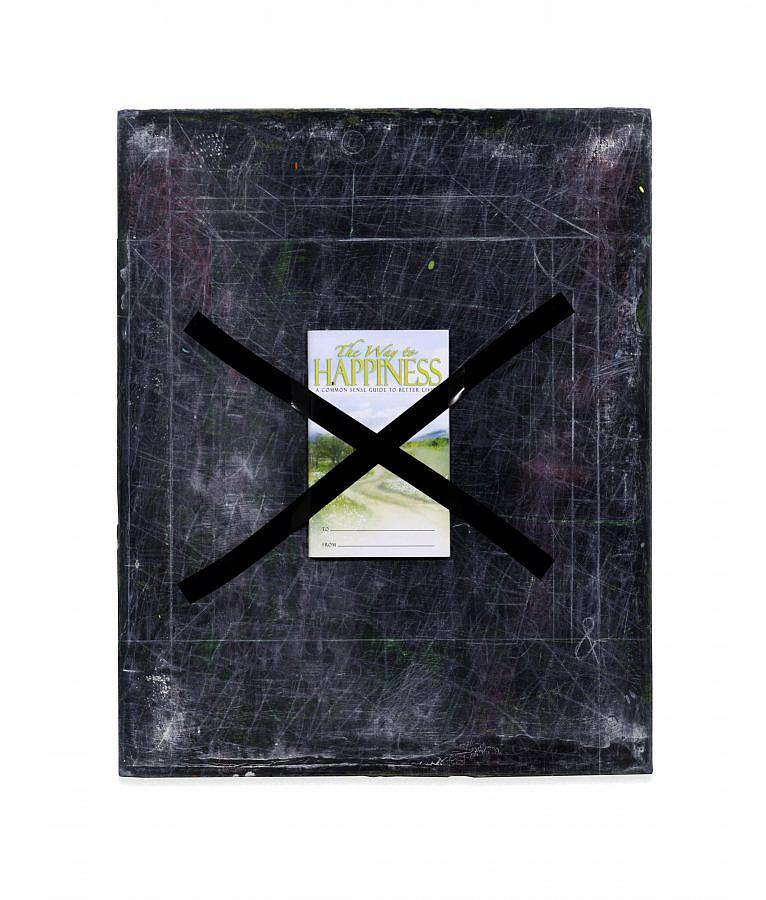 If you had to explain your work to a stranger, what would you say?  An artist stranger or non-artist stranger? I suffer from (and maybe other artists also find this to be true) an awkward mush-mouthed panic when asked to boil my work down quickly into a consumable sound-bite. “I make pictures…they go on walls. Sometimes they have bright colors and usually contain images of objects that fascinate me.” If there is more time (and if the audience wants more information), I’ll add: “I also make installation-based work that transform space with materials.” Often hand-gestures and exaggerated facial expressions are involved.

What was the last exhibition you saw that stuck out to you? I am living for the Howardena Pindell and Otobong Nkanga exhibitions at the MCA right now. I know an exhibition is good when I leave feeling overwhelmed and ready to go directly to my studio. Also, shout outs to Kaveri Raina and Cathy Hsao at Roots & Culture and Molly Colleen O’Connell at Julius Caesar Gallery.

Can you share one of the best or worst reactions you have gotten as a result of your work? How about the weirdest reaction? I recently made a sculpture titled “idiot professor”…the sculpture is a found object: a child’s chalkboard sandwich-board that I’ve drawn and collaged on. When installing this piece at Illinois State University last Fall, I decided to anthropomorphize the object by placing my shoes on the bases of the chalkboard. I tried to think about the most embarrassing thing that has ever happened to me in the classroom (sitting in gum while discussing a student’s poor attendance), so I one-upped that and used gum to stick a “KICK ME” sign on the verso of the sandwich board. At the opening of the exhibition, the students kept asking me and my curator (the fantastic Jason Judd) if they were “supposed to kick the sculpture?”

What’s your favorite thing about living and working in Chicago?  Chicago is a place that I make artwork and am fortunate enough to be in dialogue with other artists that I care about. Chicago is a place where my artwork matured, and where a majority of the people I care about live. Is there such a thing as an ideal city? Probably not. Chicago’s identity (culturally, politically and racially) is fraught to say the least. But, I moved here from the West…we lived in Colorado for seven-ish years. I love the nature and idealism out there, but it’s very difficult for art to compete with Mountains and Western ideology. This is the first Midwestern city I’ve lived in and I very much appreciate the “big shoulders” pragmatist work-ethic.

Describe your current studio or workspace. Controlled chaos: to casually observe my studio, I think visitors see a lot of detritus of half-finished thoughts and notes to myself. For a while, collage material, sketches, post-in notes to myself and imagery I was thinking about was everywhere (sometimes the all-over-ness would cause confusing studio visits where-in visitors did not know where the art stopped and studio began). In order to compartmentalize processes, I started designating walls for different processes. For example: one wall is literally my idea wall and its covered with post-it notes, potential collage material, source imagery, and random half-thoughts and/or jokes for future work. Another wall is designated to sketches and work on paper where I’m figuring out potential finalized work and those works’ potential form. The studio furniture and non-art items inhabiting the studio have also started emulating the florescent colors of the work itself (but that’s sort of a chicken and egg thing: I think a lot of artists tend to surround themselves with objects that they are somehow visually atrracted to. I noticed a couple of years ago as my color pallette was changing that I already had a lot of brightly colored objects in my studio). I have areas of the studio that I try to keep clean for when I need to execute detailed drawing and collage work. Other areas of the studio are designated “mess” areas. Finally a healthy studio library is extremely important (both for inspiration and for collaging source-material).

What do you do when you’re not working on your art?  I am vehemently passionate about my other job: teaching. Reading and collecting esoteric books, obsessing over RuPaul’s Drag Race, taking care of my plants and my dog Ziggy.