Panos Tsagaris (b. 1979, Athens, Greece) lives and works in New York. Tsagaris received his BFA from the Emily Carr Institute of Art & Design in Vancouver, Canada. His work has been exhibited among other venues, at the “4th Canakkale Biennial of Contemporary Art” in Turkey, the BOZAR-Center of Fine Arts in Brussels, Belgium, at PALAIS DE TOKYO, Paris, France, the Belvedere Palace Museum, Vienna, Austria, the Assab One foundation, Milan, Italy, the Museum of Contemporary Art, Leipzig, Germany, the Abrons Art Center in New York, as well as at the 2nd and 4th Thessaloniki Biennial of Contemporary Art, Thessaloniki, Greece.

All artworks courtesy of the artist and Kalfayan Gallery-Athens. 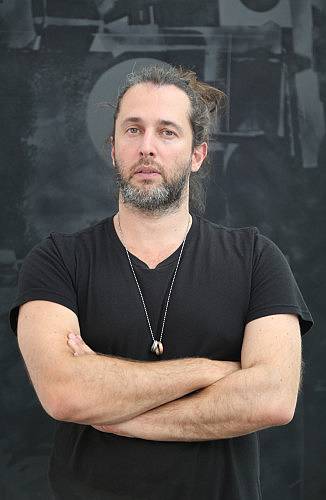 Tell us a little bit about yourself and what you do. I was born and raised in Athens, Greece, went to art school in Vancouver Canada, moved to New York in 2004, and am currently spending time in Los Angeles. I am mostly working on large photographic works and paintings; in the past, projects of mine have been “translated” into performances as well as into video works and installations.

Through my work I aspire to express the emanation of the “Divine” as it is reflected through the abstraction and the beauty of the everyday, in order to bring myself and the viewer closer to a state of Catharsis. My work contemplates on life’s fragile struggle between the sacred and the profane. Ultimately through my art I am eager to capture and express the restlessness and magic that exists in the soul of all of us.

How has living in Los Angeles affected your art practice? I have been living in Los Angeles for the last four months because of this art residency that I was doing. The residency at Hooper Projects was amazing, spending time in Los Angeles has been great, palm trees everywhere and endless sunshine. The quality of light that this city has is magical, it has this instagram filter quality! My work has always been quite monochromatic, very black and white; I have noticed the last couple of months glimpses of bright colours appearing in my artworks!! I blame LA for this.

What kinds of things are influencing your work right now? Higher vs Lower consciousness, quantum physics, the 5th Dimension

What are some recent, upcoming or current projects you are working on? I recently participated at the 4th Biennial of Contemporary Art in Canakkale, Turkey, which was a lot of fun (curated by Beral Madra and Deniz Erbas). Lalita Ivana Salander, a curator friend of mine, curated a couple of exhibitions in NY in which I participated with some new works (a group show at the SVA gallery as well as one at the Spring/Break Art Show). My work has been shown in various art fairs over the past couple of months in the booth of Kalfayan Gallery, including the Armory Show in NY as well as The Art Brussels fair. I just completed a three month residency at Hooper Projects in Los Angeles and had some of the work that I made during the residency presented at the exhibition space of the residency.

If you were a drink what drink would you be? Unsweetened green ice tea

What artists are you interested in right now? I saw this great exhibition recently at LACMA on Contemporary Art from the Middle East; in that show I was introduced to the work of Sadik Kwaish Alfraji, his video exhibited in that show titled “The house that my father built, (once upon a time)”, was truly mesmerizing. The work of Hassan Hajjaj also exhibited in the same show was very colorful and beautiful.

Tell us about your work process and how it develops. Here is a short text written by curator Artemis Baltoyanni on the work that I produced during my residency in LA: “Panos Tsagaris’ practice has always been informed by his spiritual explorations and mystical curiosities. Interested in the idea of purification as it appears in different mystical traditions, Panos’ earlier works took mostly the form of ink with gold leaf drawing, and photography, the latter as documentation of private performances. His recent series are based photographs of mirror still lives that he puts together in his studio. In mythological tradition, as in the story of Narcissus that drowned in his own reflection, the mirror symbolizes the falling of the soul from the divine to the material, from higher consciousness to lower being. Once constructed, the highly reflective composition is photographed using the artist’s iPhone, our contemporary mirror and the epitome of our vanity. The picture is blown-up and printed out, more mirrors are added and the new installation is re-photographed. The process of printing and photographing continues until the reflective qualities of the mirror are exhausted. In his effacing of the mirror with the re-photographing, the layered screen printing and the use of gold leaf — another symbol of the divine — Panos aims once again to the purification of our collective being.”

How long have you lived in New York and what brought you there? I am based in NY (for about ten years now on and off) but for the last four months I have been living in LA; I was brought over to the west coast to be part of the Hooper Projects Residency; the residency provided me with a huge studio to work in, money for my art supplies and an apartment to live in while in LA. It has been such a great experience and a productive time for me that I asked them if I could keep my studio for another couple of months, they agreed and here I am, still in Los Angeles!

What do you want a viewer to walk away with after seeing your work? I hope that the viewer will walk away with a feeling of inner balance, contemplating in the fact that everything/everyone is connected, that we are all one with the ever-changing, even-moving universe that surrounds us.

What’s your absolute favorite place in the city/the world to be? I love NY, it’s home for me; I have also been enjoying a lot my time in LA. Los Angeles is different from NY in so many ways; you have space here, palm trees, and amazing weather; the energy of the city is also much less intense. Artistically there is a lot going on in Los Angeles right now, the local art scene is blooming, big galleries from New York and Europe are opening up spaces here, similar to what was happening in Berlin ten or so years ago, the main differences are that in LA there are a lot of wealthy people with big houses and you also have amazing weather all year round! However my absolute favorite place is wherever my wife Eva is!

Describe your current studio or workspace. My current studio is located within the Hooper Projects, in this huge warehouse in downtown LA; it’s about three times the size of my previous studio in NY! I get lots of natural light from the windows and skylights and really love how in this larger studio I am not forced to scale down my ideas, and how I have the room to work on larger in scale projects.

What are you reading right now? The Mysteries and The Mystic Vision, a series of books based on papers from the Eranos Yearbooks, all edited by Joseph Campbell.