Kara Joslyn (b. San Diego, CA) is currently an MFA candidate in Visual Arts at UCSD. In 2008 she received her BFA in Painting from California College of the Arts in San Francisco, and lived in Oakland, CA, where she collaborated to begin an artist-run space in Oakland called As Is Ex. from 2010-12. In 2011 she completed a Post-baccalaureate in Painting at Columbia University School of the Arts in NYC . 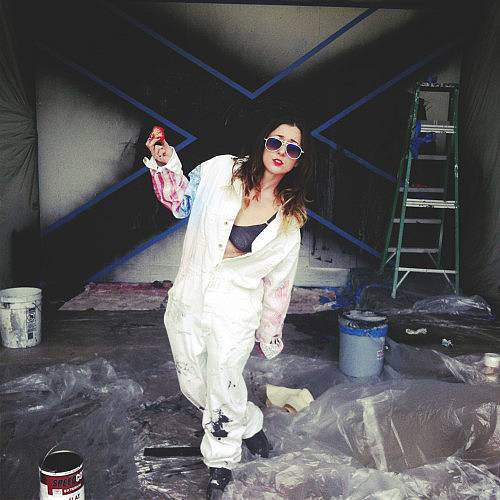 Tell us a little bit about yourself and what you do. I am from San Diego originally, and I’m back here now getting my MFA at UCSD. I love being back and I’m moving to LA next year. Y’know, I’m never leaving SoCal again — I’m even an Italian citizen (mom’s side) but I’m still not leaving 😉

I have always been a bit of a collector — accessories, records, random various lil objects — Lucite paper weights, etc. I brought so many rocks and shards of ceramics back from Greece in my bag with me last year, haha. My favorite collection right now is these drug-themed buttons and patches, which were actually in an exhibition at the La Jolla Athenaeum last year.

I am currently working on a bunch of paintings that are 100% painted with airbrush, which is new for me. I’m mixing my palette with optical/color-shift pigments into polymers. These kinds of paints function best when painted over black, which is attractive to me since I mostly work in black and white and this presented a new way to bring color into my work. I’m really into drawing with graphite and I made a whole series of patterny optical drawings… Now I’m still into the optical, but more trompe l’oeil/hologram optical stuff. I have been using airbrush since I was a kid, but really since 2007, when I got my own kit… It was a really shitty one — haha. I learned a lot of my process from studying old-school graphic design, taught by Chris Polentz (who is still teaching at Art Center I believe) in a class made up of pre-computer design/illustration techniques… The paintings have this systemic design process, but of course since I’m a painter, not a designer; I’m doing it wrong and I have to invent things along the way — which is always a good idea if you ever get bored. So, I have this strong commitment to painting, but I also have this love of design and curiosity about optics, materials and their histories. There’s geometric abstraction influence; I also think of a painter’s “touch”… I like painting with the gun, but it’s crazy to paint and never touch the surface with more than air-pressure. Kinda tech. 2015 style. 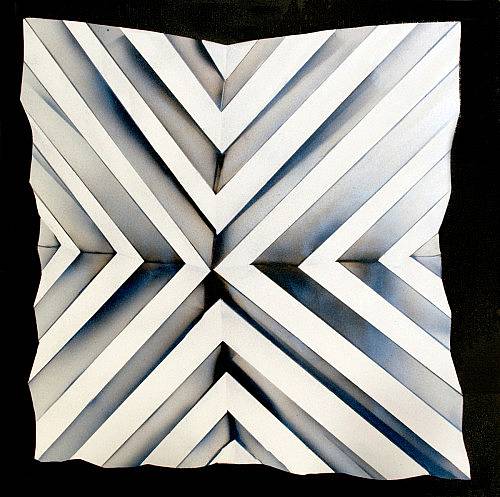 What are some recent, upcoming or current projects you are working on? I recently moved into a studio in East LA (en El Sereno). I’m currently working towards my thesis exhibition next spring, part of which is a series of 20 paintings I’m currently working on called “geometric solids and variations.” The paintings are based on re-photographing a vintage book (I stole it from my grandpa) of paper sculptures from 1958.

I’m also working on another series of abstract paintings that are tied to optics and my holography project from 2014.

I just completed a residency at the Experimental Drawing Studio at UCSD with my sweet painter pal, Justin Olerud. He’s attending graduate school at Columbia and he came out to UCSD to do a collaborative book project with me called I’ll be your Mirror. We’ve been collaborating in one way or another since 2009. We just completed two hand-made artist books! This was my first time making an artist book — it was so cool, I can’t wait to do it again.

I also have an upcoming show at Chris Duncan’s alternative space, Land and Sea, in Oakland, CA. I’m really excited to do a project there; I love artist-run/alternative spaces, and I feel super stoked when I get to do cool stuff with artists that I admire. 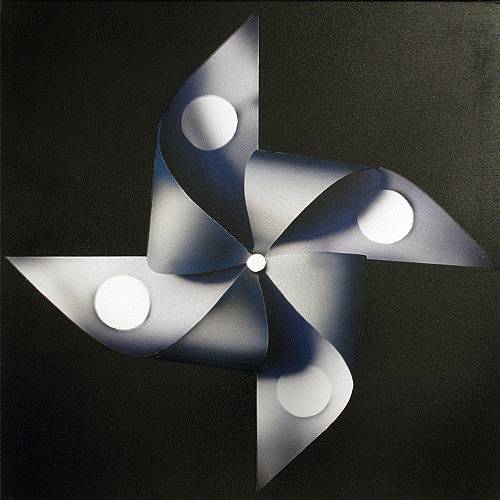 What is one of the bigger challenges you and/or other artists are struggling with these days and how do you see it developing? “Technology” is of course a hot topic, at sci-fi UCSD especially. I also use technologies that are retro and no longer even regarded as “technology.” I like learning about the source of these methods, materials and tools — like when I was younger and I found out Yves Klein blue originally comes from mining lapis lazuli in Afghanistan. Or how holography, optics and even the optical pigments I’m using all stem from technologies developed for space wars/the defense industry. Optical films, even ray-bans are also tied to a material developed for the purpose of ultimate destruction… Whoa.

In painting, the issues of technology include the now-common ways of digitally printing photographic and 3-D objects but more problematic than using these technologies is how these objects will play out over time, and how they will be contextualized. I mean, when you see objects made using “cutting edge” technologies and subject matter from 30 years ago, they mostly look very dated, whereas an oil painting is in itself the most dated of technologies …but it looks dated only because of style or subj. matter — how the temporal conditions influenced the hand of the artist.

It’s crazy what persists and what fades away. I remember William Gibson talking about how even though he may have been credited with predicting the Internet, when he wrote Neuromancer he was also so very wrong because he wrote his cyberpunk futuristic characters using payphones like every second of the novel.

But, it (obvs) takes a lot more to be a great artist than harnessing technology, since it’s just a set of tools. We have a giant robotic milling machine at UCSD that can make a hundred little things out of foam that no one will probably ever care about. But then Alma Allen uses the same tool (out in Joshua Tree) to make his exquisite objects.

You know, the light and space stuff looks really dated, but also still really works in the best way…it’ll be interesting to see what will happen.

I mean, it’s even crazy that people (thankfully) still play acoustic guitars if you think about it. 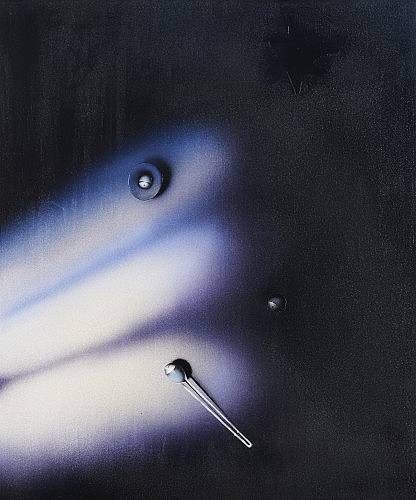 What artists are you interested in right now? Anya Gallaccio is making me watch all this great Agnes Martin stuff in our Independent Study right now and I’m l o v i n’ it. Since I am working with images, light, photography and finish I will mention my inspirational loves in that respect: Vija Celmins, Judy Chicago, Magritte, John Divola, Ed Ruscha, Jack Goldstein, Caravaggio.

What was the last exhibition you saw that stuck out to you? I know it was a few years ago, but Under the Big Black Sun: California Art 1974-1981 — the Pacific Standard Time survey curated by Paul Schimmel at Geffen Moca. It never leaves my mind, probably because I shelled out the scrillz for the big black hard-bound book. It’s on my desk right now.

What is your snack/beverage of choice when working in your studio? I love snacks and especially snacks titled “snacks”. I basically survive on “fried tofu snack” from the boba tea place at UCSD….I also love seaweed nori snacks, chips, and dark chocolate… and coffeeee — hot coffee. 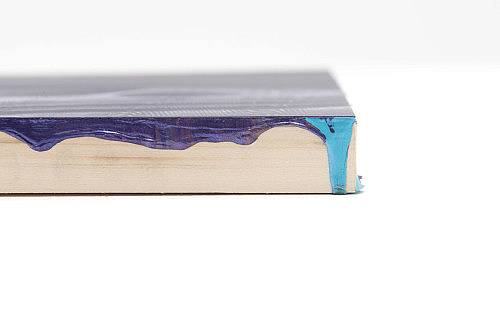 What do you do when you’re not working on art? Being at UCSD means going up to LA often to openings and to have/do studio visits. I’m really excited about being back in LA; it’s really inspiring and I get to be hanging with palz, and nerding out about art and bullshit and funny stuff and eating snacks. My boyfriend Conrad Ruiz is a painter too. We go to the gym by his house in LA together. A couple of times, we went all the way to The Valley just to go to “Follow Your Heart” for vegan reubens (Conrad’s totally not vegan at all) and we even found a vegan punk taco cart when we were in Mexico City.

So, um, besides driving, getting schooled in studio visits and eating snacks, I also have an obsession with fashion and vintage shopping and I’m a nerdy collector. I used to collect records a lot when my job was being a DJ, especially rare 45s — glamourous rock, punk, r’n’n, r&b, soul, bubblegum. I like collector-types cuz people are always sharing knowledge in this subterranean way…even in San Diego, word spreads about some random thrift store that is unexpectedly a treasure trove — my painter pal from UCSD, Josh Miller, knows about all the east San Diego thrift stores — he’s always finding the best ever weirdest shit. You often have to go a bit out of your way, and maybe stop at a cowboy bar after, which is all part of what I really love…I used to be a research assistant for a feminist author and I think my mind is just attracted to digging and categorizing. Some weird caveman instincts…Speaking of which it’s also good to stretch it out at the gym and I’m into the cycle class right now— it sucks and its too hard and I hate doing it so much but then a half hour later I’m always like — ok, yeah, that was good. 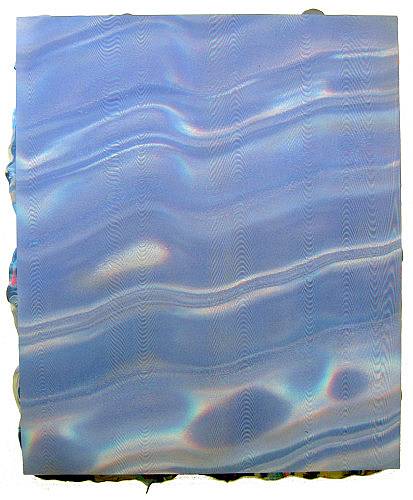 If you hadn’t become an artist what do you think you’d be doing? Plastic surgery. Or figure skating.

What are you listening to right now? X-Ray Spex “Germ Free Adolescents.” But really I’m watching Star Trek: the Next Generation.

Can you share one of the best or worst reactions you have gotten as a result of your work? “So…Kara…..I mean, what are you looking at? Black light posters or something?…….Here, you should read this Picasso book I have in my bag.” – Columbia University, 2011. Lolz. 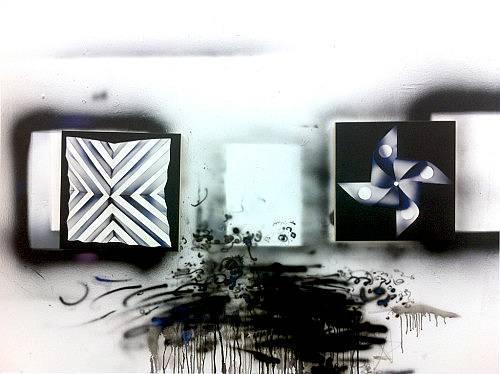